With the Central Saint Martins Creative Unions exhibition now over, we take a closer look at the final themes and works which comprised the show.

There are few daily actions that are not dependent on, or modified by, technology. Our resources are digitised, solutions and distractions are at our fingertips; we are incalculably connected, we watch and are watched. The projects in the Coded Intimacy section of Creative Unions examine our relationship between the remote and the intimate. Analysing what has been subsumed into our everyday routines, the designs in this section playfully reinterpret existing technologies, evaluating how we spend our time, how data and information are used and how our behaviours adapt in relation to invisible, automated forces. 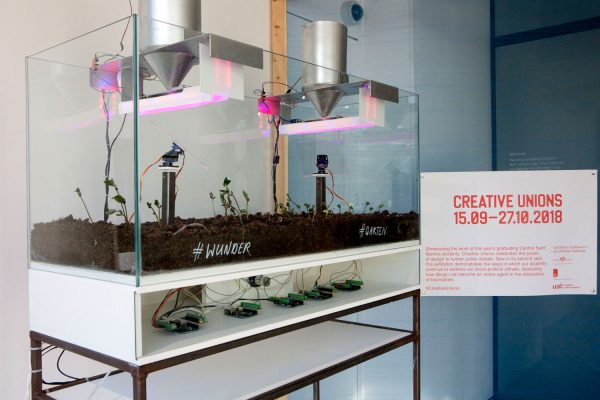 BA Graphic Design graduate Florentin Aisslinger’s project Data Garden is a blind collaboration between twitter users and a micro-biotope inside a terrarium. During the exhibition run, every time a tweet was published containing the word “wunter”, a seed was dropped inside the terrarium, while the irrigation system was triggered by the word “garten.” A collaboration between nature and technology, Data Garden is a speculative demonstration of our interaction with mass data – how it could reward nature but also cannot be controlled. 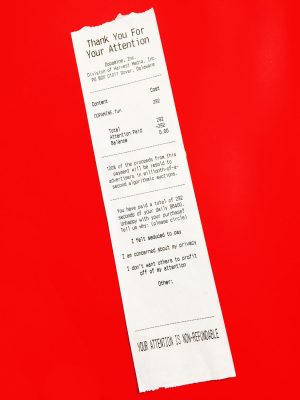 MA Graphic Communication Design graduate Erin Peace’s project also relied on, and critiqued, digital interaction. Her project YOUR ATTENTION IS NON-REFUNDABLE is a satirical online experience which engages users with GIFs, listicles and notifications. Although our attention is sacred, social media and digital platforms encourage us to spend it carelessly and impulsively. As part of Peace’s work installed in Creative Unions, users were asked to spend their time on the site and “checkout” when finished, at which point they received a physical receipt of their commodified attention. Peace’s recreation of the online attention economy serves to remind viewers their time is finite and should be spent conscientiously. Nina Cutler, Made in Our Image: Love and Cruelty with Robots, 2018

As our dependence on technology continues to grow, so does our criticality and awareness of its implications and consequences. Alongside our reliance on technology comes a distrust – what will happen if we develop the technology to create machines in our own image? When we hear the word “robot” we most likely think of a humanoid machine. However, beyond hardware and aesthetics, a new breed of “social” robots are also developing another human facet – emotions. MA Material Futures graduate Nina Cutler’s project examines the potential relationships we might have with a sophisticated, emotionally intelligent being. Categorised into actions of “love” and “cruelty”, Cuter’s photographs visualise our future behaviour and interactions with a fictional, humanoid, social robot called Tonii. 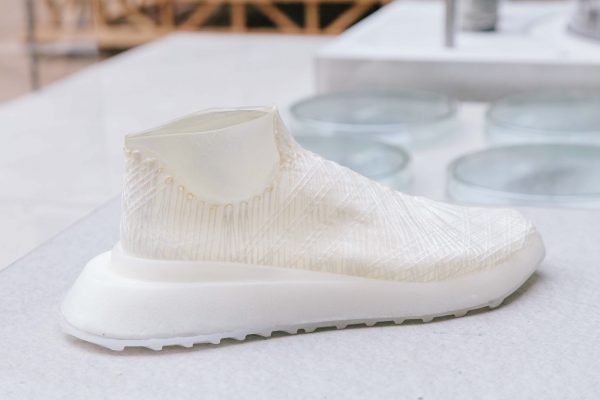 Fellow MA Material Futures graduate Jen Keane focused on the production of new materials, developing research and procedures that could change our entire approach to making. With micro-plastic pollution, growing land and water scarcity and over-consumption, we have a real material problem. By manipulating the growing process of certain bacteria, Keane has developed a new form of microbial weaving, producing an innovative category of hybrid materials that are strong, lightweight and potentially customisable to a nanoscale. Keane’s project This is Grown. proposed an alternative to petrochemical based materials and was one of five Maison/0 Green Trail winners, shortlisted for the MullenLowe NOVA Awards and won The Mills Fabrica Techstyle Prize at Degree Show 2018. 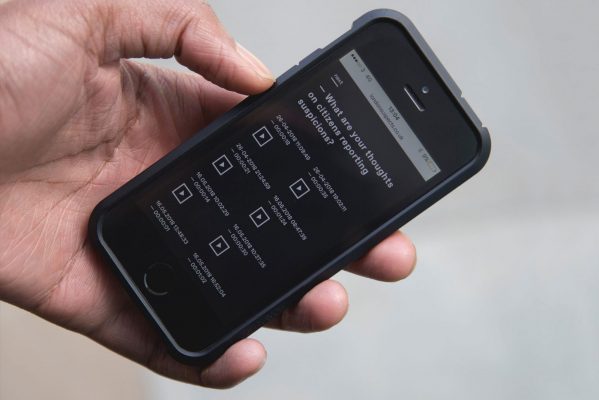 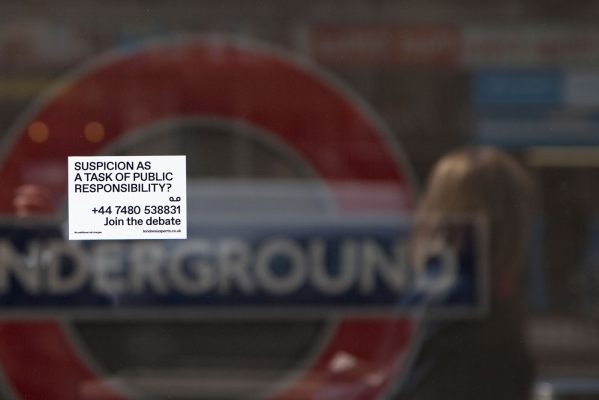 On a daily commute in London, the British Transport Police’s “See it, Say it, Sorted” campaign reminds travellers to stay alert. In the fight against crime on public transport, we are encouraged to report anything that we find suspicious to the authorities. LONDON SUSPECTS is a phone line set up by MA Graphic Communication Design graduate Daniela Barbeira, which puts forward questions to the public, creating an archive of voice recordings about the implications of suspicion in a public space. While public communication technologies rely mainly on visuals, Barbeira’s project uses the human voice to communicate genuine, significant thoughts on public issues. 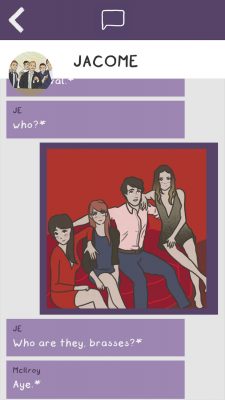 The Coded Intimacy section of Creative Unions features a total of eight designers – five of which are graduates of the Graphic Communication Design programme. Concerned with our changing, and at times questionable, modes of communication, the Graphic Design projects in this section analyse and reframe the way in which we engage with and represent our surroundings. Paul O’Reilly’s project #Topshaggers uses the technique of forensic storytelling to document a contentious news story and examine the way in which sensitive information is disseminated. In 2016, Irish rugby players Paddy Jackson and Stuart Olding were accused of raping a 19-year-old woman at Jackson’s home in Belfast. Installed in Creative Unions as a hand-held device, #Topshagers is a reconstruction of Jackson’s phone activity the day after the incident. The material has been taken directly from evidence in the 2018 trail as well as from social media posts, and has been rendered in an accessible, illustrative style. In this project, O’Reilly presents multiple narratives as a space to be explored – an investigation of a scene after the fact. 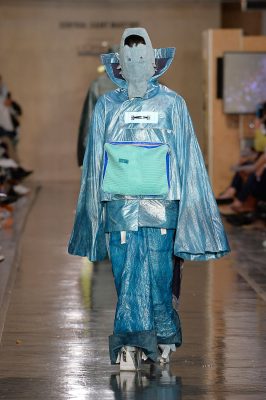 The title of BA Fashion Design with Marketing graduate T’ang Sheng’s collection is taken from a popular slogan during the Chinese Communist Revolution: Being healthy is prioritised for the revolution. In his collection and accompanying video on view in Creative Unions, he frames the body as a site of rebellion, using clothing to challenge a culture of “material wealth and temptation,” surveillance and control. Through confrontation and intervention, Sheng attempts to re-humanise the anonymous to regain that which has been “abandoned during Chinese social development.”