With Degree Show One: Art now open, we take a closer look at our students’ work and the inspirations behind it.

BA Fine Art students Sidney Smith and Jim Bicknell-Knight, known collectively as Sid and Jim, have installed an alternative, fictional Degree Show alongside our own. Hijacking the display conventions of a Central Saint Martins information stand, they provide maps and leaflets detailing invisible artworks in impossible locations: the Central Centre for Contemporary art located on the ‘newly built’ 4th floor of the Granary building; the ‘brand new’ Central Sculpture Garden and a series of performances and events in the Basement. Fabricated artists and their artworks are mapped out, encompassing materials such as genetically engineered elephants; a sailing boat; transparent drainage pipes; vines and fire.

As part of their ‘CSM Degree Show’, three mascots wander the exhibiting spaces, dressed in coloured jumpsuits with large, felt and foam horizontal heads. One is positioned in the crossing, greeting visitors as they enter the show, waving, dancing and posing for photographs. While this felted figure behaves as one would expect a mascot to, the other two walk around the show as though off-shift, left to their own devices, the large costume heads tucked casually under their arms. With an interest in the construction of fictional narratives Sid and Jim have presented our visitors with an uncanny, site-specific, experience which, ultimately, cannot be experienced in its totality. Following the parallel nature of their own intervention, here they talk us through five site-specific works which have inspired them through their subtle subversion of pre-existing or mundane experiences.

Richard DeDomenici says that while he’s making work he’s aiming “to create the sort of uncertainty that leads to possibility”. When he ran in front of the Olympic torch in 2012 he did exactly that. It was funny and mad but that didn’t detract from it being a clever and political work. And it’s more than just a fleeting trick; he’s not hiding the truth or building a false reality but instigating a double take or secondary thought in the audience. 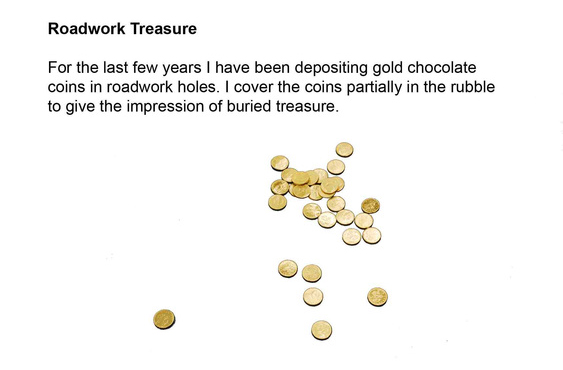 After reading about this work, there isn’t a set of roadworks we’ve ignored, just in case we spy some gold coins nestling in there. This is also something we want to incorporate into our work – the idea of giving it a life beyond the initial viewing. Ashcroft is a master of storytelling through objects; she gives them a purpose beyond their appearance or function, often through the use of relocation. In applying these new meanings, she shows people that everything isn’t necessarily as it seems, in turn, encouraging further consideration when you next walk down the street. 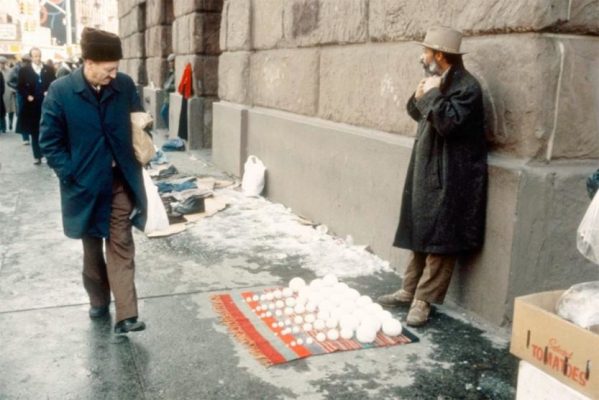 This photograph of a discreet action has become one of the most famous images of Hammons. It perfectly captures him as an anonymous, disreputable pedlar, alongside others selling jackets or handbags. It is also an excellent example of the ‘second glance’ which, here, is an attempt to question the arbitrary nature of the art market. This all comes from using site-specificity with a crafty and well-considered twist. 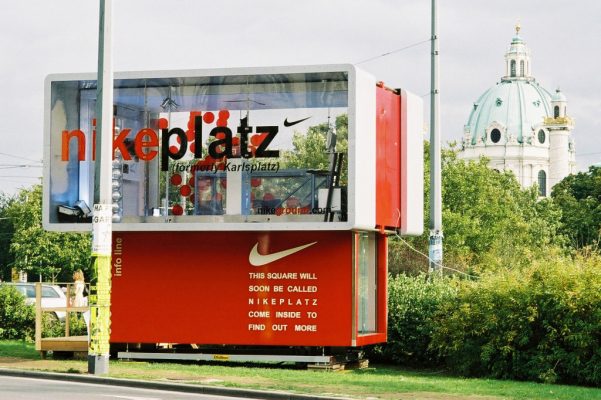 Our work can be viewed through the lens of hoaxes and how they bend one’s perception of reality. This work by Eva and Franco Mattes could be seen as one of the most elaborate pranks ever, played on one of the world’s biggest brands. The Mattes created a fake advertisement campaign detailing the news that Karlsplatz, one of Vienna’s main squares, was going to be renamed Nikeplatz. The scale of what they was hugely impressive; inventing a brand to take over the square was bold in the first place but using Nike was genius. They managed to create a fiction so thorough that they convinced an entire city and provoked a global giant into legal action. Bruguera’s piece doesn’t quite sink into the background but it does definitely consider the space within which it is experienced. During the performance, staged at Tate Modern in 2008, two policemen mounted on horses, are brought into the exhibition space unannounced. They patrol the space, guiding and controlling the audience by using a minimum of six crowd control techniques. These methods are familiar to the general public, seen at many large-scale events. Considering the amount of people coming into Tate, it makes for a real spectacle.

Comparing an art museum to a political demonstration enables people to think of the space differently, and this can massively alter the way you experience the rest of the work. We love it when a work creates this ripple effect that extends to other situations. With Bruguera’s work it means that next time you see others experiencing a similar situation of oppression, you may feel an empathy which you normally you might not have.