For Show Two: Design, we connect the dots on a few students presenting their work to the public for the first time.

In a current climate focused on borders and boundaries, many of the projects in Show Two: Design actively push for the power of collaboration and conversation. One of the students most explicitly dealing with the ramifications of isolationism is Kaye Toland’s from BA Product Design. Her Make It or Break It is billed as “a conflict resolution board game”, it works around the notions of wall-building and breaking, exposing how invisible cultural barriers become entrenched and pernicious. Structured around Toland’s own tripartite conflict resolution process, the game has three parts: Wall Makers/Wall Breakers, Empathy City and Co-operative Communities.

“In light of Brexit, my aim was to share the lessons we have learned in Belfast about barrier building and segregation and how, once you build a wall, even when the wall is eventually gone, the divide will always be there.”
Kaye Toland

Working across division and segregation is also central to Lucy Ganley’s final collection. The BA Jewellery Design student became interested in the experience of prisoners and began researching the history of incarceration, visiting prisons, reading diaries, volunteering on the Makeright project and making contact with current inmates. Through letters, she asked questions, hoping to gain an insight into life as a prisoner in the UK today. 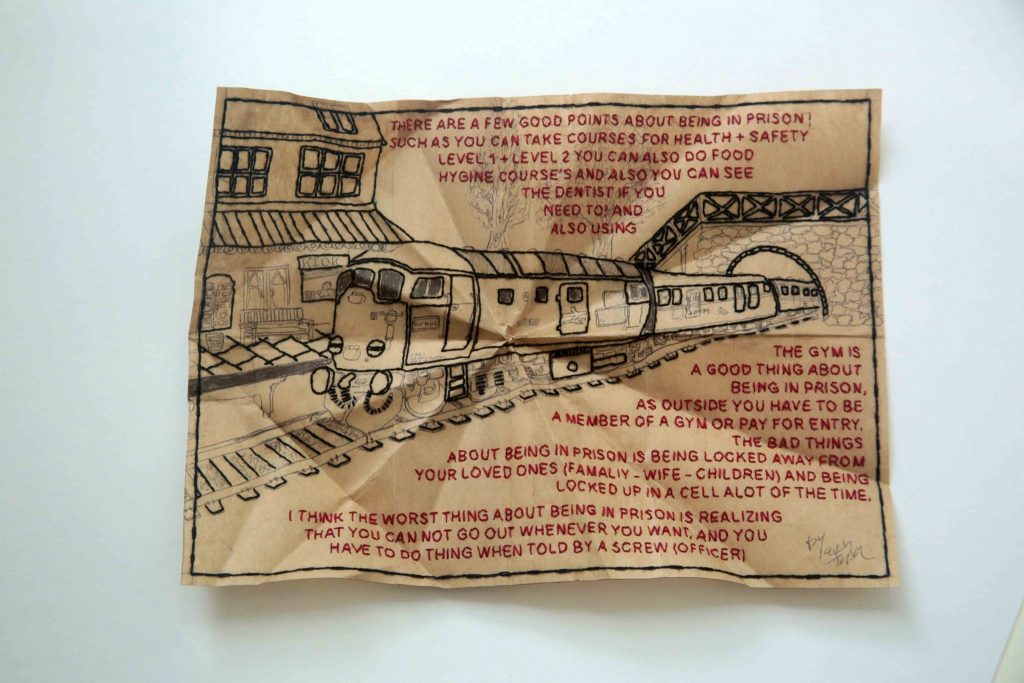 She was overwhelmed by the response: “They were so forthcoming. If you ask five questions, you’ll get five pages. And they’ll talk about details that you’d never considered – colours, textures and how those things affect them. It was such an eye opener. They were so open and just wanted somebody to listen.”

Wanting to make the invisible visible, Ganley set about creating a collection of badges. Made from paper and thread, they are beautiful, fragile objects with quotes emblazoned across them. “I guess I see them like a protest badge, a show of solidarity – you’re wearing somebody else’s words.” Made out of everyday materials accessible in prison, Ganley likes the idea that these could be made by the inmates themselves. 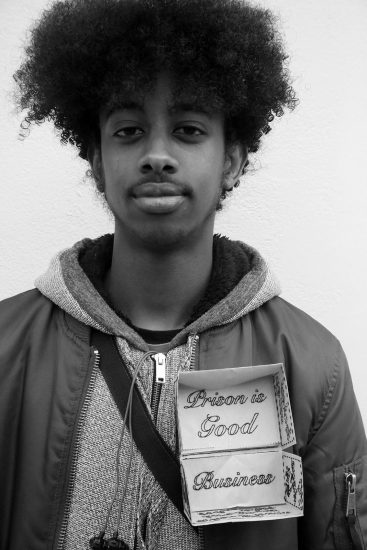 Although there are statements about the commercial impulse now at the heart of many prisons–“Prison is good business” says one–the quotations don’t always dwell on the negative. Looking across the collection, viewers will find the appreciation of access to education or the recollection of incidental detail. Ganley’s work is a prescient reminder of the pull to find humanity within the system.

Ganley’s collection is a conversation made manifest, a bridge built with words. Elsewhere in Show Two, there are projects that avoid language in an effort to connect not across social but national borders. Nozomi Koseki, MA Narrative Environments, presents a dance piece performed in public space. Coloured tapes mark out on the ground the boundaries of action, reflecting also the flags of the nations represented within the dance troupe. In this abstract setting, the dance begins, with a language of movement inspired by different cultural gestures. One by one, dancers drop out of the performance and the piece dissolves until the tapes are lifted from the ground. Finally, viewers are offered message cards with everyday stories of cultural stereotyping.

Beyond Borders is a non-verbal celebration of national difference, but also a timely reflection of boundaries, both personal and national. “I really like the fact that people are different,” stresses Koseki, “the difference is valuable. Our cultural backgrounds make us interesting to each other.” This interest stems from a childhood experience, at 10 years old – right after the Gulf War – she had an Iraqi friend. “She hadn’t done anything wrong,” recalls Koseki, “but it was surprising how politics influenced her life and the way people treated her. I had trouble with that.” Viewers of Koseki’s Beyond Borders are themselves enveloped by it, marked out on the ground in tape as if to highlight that no one can escape their national and cultural context.

Students from BA Culture, Criticism and Curation have installed a part-dining room, part-theatre, part-seminar in Show Two. Called Rehearsal Dinner, the space is host two discussions over lunch and dinner with invited guests and members of the public welcome to join. Meant as a series of rehearsal dinners building towards a final, closing event, the conversations will be themed on diverse subjects such as language, translation, photography and the movement of people.

“The whole point is that we’re not setting up an exhibition that’s based on product,” says BA CCC student Rosie Woodhouse, “we’re reflecting on our position in the institution – it’s about process and workshop. We’re working through them in a collective way.”

Rehearsal Dinner was originally inspired by the metaphor of an embassy, reflecting a space of – and yet difference from – the place in which it sits. But the name is also suggestive of border territories and while there is no political aspect to the set up Rehearsal Dinner, as Hannah Adlide explains, “points towards the importance of communication, discussion and dialogue rather than end results.”
Although it might initially be hard to connect the thread across these disparate projects, ultimately one is reminded of the power of the arts and design to cross border and boundary – be that social, political or simply disciplinary. Echoing our Creative Unions initiative, we are reminded that creativity, and humanity, flourishes in the open.

Lucy Ganley and Kaye Toland are nominated for the MullenLowe NOVA Awards. Show Two: Design is open to the public 21-25 June at Central Saint Martins.