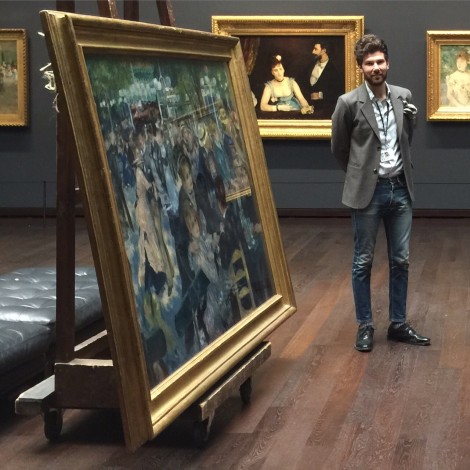 Jordan Silver at the Musée d’Orsay.

After graduating from MRes Art: Theory and Philosophy this summer, Jordan Silver took up an internship at the Musée d’Orsay.

Here, Jordan tells us about his Parisian experiences and how Central Saint Martins shaped his development.

Tell us about your internship.

Jordan: I am a curatorial intern in the paintings department of Musée d’Orsay. My primary task is curatorial research for two upcoming special exhibitions, where I get to reference many original documents and texts from the museum archives.

The first is a retrospective of the painter Frederic Bazille. The second is a survey of the arts under the second empire of France and the reign of Napoleon III from 1852 to 1870. I have also been heavily involved in the composition of loan requests for the latter exhibition, especially when the d’Orsay applies to non-French museums and institutions.

Beyond this, I have been very fortunate to help manage the collections on display – offering insight into which works are shown and where they are placed – and oversee the installation of new works in the galleries each week.

How have your studies helped you?

Jordan: This coming fall, I begin my PhD research under the supervision of Dr. Francesca Berry in History of Art at the University of Birmingham. I have been very fortunate to receive one of only a few College of Arts and Law doctoral scholarships.

My research seeks to formulate something of a working ontology for the practice of 19th-century French painter Edouard Manet. I will also be returning to Paris to continue working at Musée d’Orsay.