MA Industrial Design partnered with Renault to challenge students to rethink the car interior for future self-driving vehicles. We caught up with the winning design team to say congratulations and to hear how they were inspired by Pina Bausch and Hussein Chalayan

The word ‘car’ doesn’t seem quite right when talking about ‘Oura’, the winning project from Renault’s collaboration with MA Industrial Design. Described as a ‘wearable vehicle’, it’s a vision of the future in which any hint of car convention has been stripped away.

Created by Lily Saporta Tagiuri, Evgeniya Chernykh and Zhenyou Gao and selected by a panel that included Renault’s Vice President of Exterior Design Anthony Lo, Oura is gesture-controlled with an interior design conjured by virtual reality design technologies and suspends the driver as they move almost weightlessly through space.

The project began broadly investigating future mobility in the context of autonomous vehicles. The Masters students worked individually with initial ideas spanning from exploring Google as a transportation hub to the use of VR for people with wanderlust in remote places. Chernykh explains: “It was interesting because the project combines research – it needs to be connected to logic ­­– and also dreaming about the future. It was something limited and then without limits all at the same time.”

The students were carved up into groups by their tutors so Tagiuri, Chernykh and Gao began by finding the connections between their practices. Though their interests had stretched from VR to way-finding make-up, the group talked about the conflicts of smoothness and glitches within the transport experience. “We observed that nothing operates smoothly now,” says Chernykh, “there are glitches like traffic jams. So we looked at things like the spacesuit, how to create a sense of seamlessness.”

Focusing on the movement of the body brought choreography into the conversation. Dance, and Pina Bausch in particular, was a particularly fruitful path. Watching a dance in which the protagonist falls and is caught by a partner before hitting the floor, touched on the sense of trust and protection that the group were after in their design. ‘We didn’t want it to be like a piece of technology, where you’re entering and relinquishing control. The vehicle had to be your partner’, explains Tagiuri.

And so, they performed the functions of a car as a dance with Tagiuri acting as the vehicle and Gao the passenger. “It was an experiment about trust,” says Gao, “how can the car protect the passenger and how it can move.”

Having mapped current personalised vehicles from the Segway to the hoverboard, the team knew what they didn’t want. And their inspirations were broad, from the aforementioned Bausch to artist Rebecca Horn and fashion designer Hussein Chalayan. As Tagiuri explains, “we responded to things that were mechanised but elegant and playful.”

Oura connects to the driver at the waist, like the hold of a dancer, stabilised with inbuilt gyroscopes creating a sense of weightlessness and achieving the seamless experience of travel the trio were after, while offering a world of digital activity and control through a virtual reality experience. 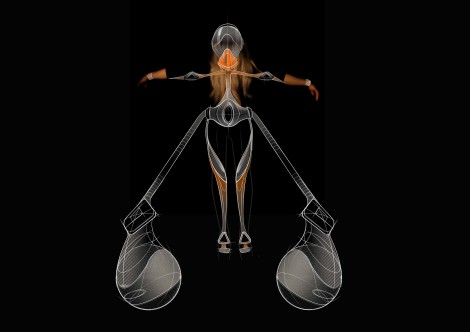 While Oura embraces the creative speculation on what the future has to offer, each decision, the students emphasise, follows distinct reasoning. An autonomous car, by its nature removes the need for the protective structure that we’ve become accustomed to in a conventional car, as well as the interface that goes along with driving. “We wanted to reduce the materiality without jeopardising the positive experience of being in a car,” explain Taguiri, “For us it was a series of logical decisions that took us there. It wasn’t that we wanted to reject the brief. We weren’t trying to rebel at all.” It may have begun as a project about future automotive interiors but the designers were quick to realise there didn’t need to be an ‘interior’ at all.

“We were never going to give Renault a car design, they are car designers,” says Taguiri, “We’re going to give them what we can do… and we’re going to have fun.” Well aware that their design had pushed the brief and was one of the most conceptually challenging, the trio presented their work to the judging panel. It was this combination of courage and creativity that Renault responded to. “The designers went beyond the confines of a vehicle,” says Anthony Lo, Vice-President of Exterior Design at Groupe Renault, “they created the most surprising concept.”

Throughout the process, the designers took risks. Asked to design a car interior, they presented a concept that ostensibly has no interior. But that experience is exactly what has been the most valuable, Taguiri says: “It’s important to have the courage to do your own thing, have your own style. You don’t have to conform to convey; sometimes, confirming the status quo isn’t very convincing.”