Enid Marx: Print, Pattern and Popular Art at our neighbouring gallery House of Illustration, is the most comprehensive retrospective of Marx’s work mounted in the last 40 years. In 1921, Marx attended the Central School of Arts and Crafts, before it merged with Saint Martin’s School of Art to form Central Saint Martins. Here, our Museum & Study Collection curator Sarah Campbell talks us through two works from the museum collection selected for the large-scale exhibition of a College alum who shaped the world of design. 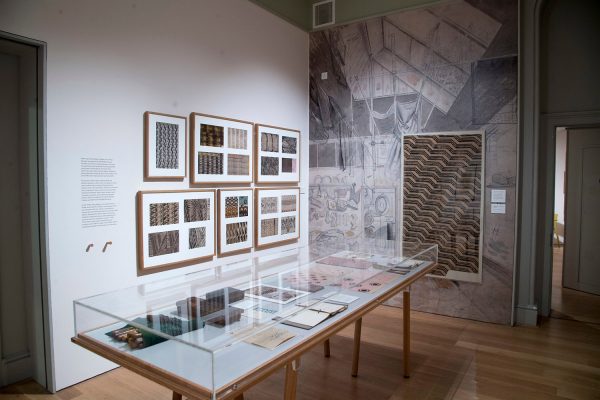 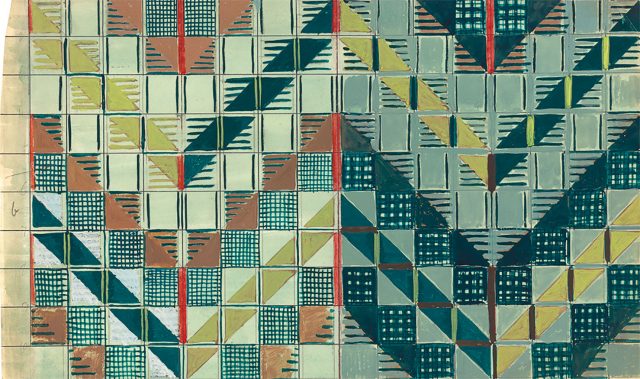 Enid Marx was a textile designer, printmaker and illustrator who was once hailed as Britain’s “queen of patterns.” She is perhaps best known for her fabric designs for the London underground, beginning in the 1930s – an iconic commission which gave her work a familiarity, seen and used by thousands of people every day. Her work with them spanned many decades; her Shield design was used widely in the refurbishment of London Transport stock from 1949 onwards, giving her work a visible longevity throughout the 1950s. 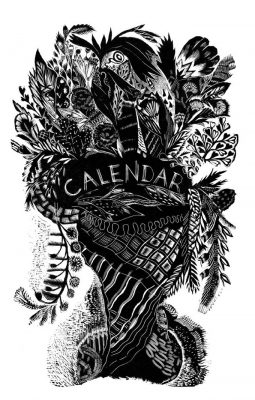 Two works from the Museum & Study collection, Cornucopia and Zoo Poster, feature in the exhibition at House of Illustration. Cornucopia is one of Marx’s artist proofs, depicting an abundance of harvest produce. Cornucopia was created by Marx for Muriel Barron, sister of half of the design duo Barron Larcher Phyllis Barron, for a 1929 calendar design. This complex illustration of a horn bursting with food would have been a wonderful design for the year ahead. Marx was clearly drawn to this motif, as the cornucopia can also be found in furniture fabric she designed in 1938, although here the design is much smaller and forms part of a discrete, repeated pattern. 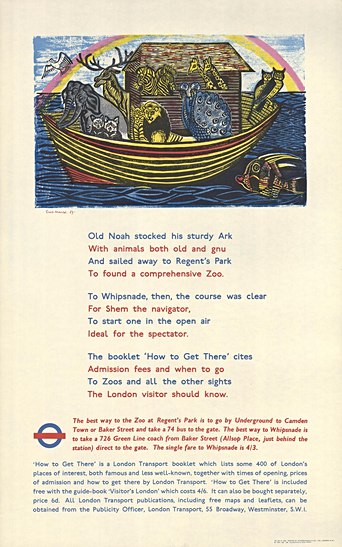 Zoo Poster was one of many designs Marx created for London Transport. It advertises the nearby attraction of London Zoo and the safari park further afield in Whipsnade, through a colourful illustration of Noah’s Ark. The poster was produced in conjunction with a booklet about things to do in London and nearby. Although most people are familiar with the idea of Noah’s ark, carrying pairs of animals to safety during the Genesis flood, not so many will know the story of Shem, Noah’s son, who navigated the ship through the waters. Marx’s use of more obscure biblical names and the unlikely animal representative of a gnu, all used to advertise the London underground, shows the diversity and humour she employed in designing for the transport network.

After Marx studied at the Central School of Arts and Crafts, she went on to study at the Royal College of Art where she was taught by Paul Nash, who had a great influence on her practice. Nash is known for his expressive watercolours, and Marx was inspired by his use of line and shape. His fluid lines heightened by bright washes of colour are certainly reflected in her drawings and book illustrations and her distinctive drawing style, through which she interpreted the world around her. The humour and inventiveness of her work shines through, in the Zoo Poster but also in her children books such as The Little White Bear and The Pigeon Ace.