What Can Ceramics Do?

Each year, BA Ceramic Design students collaborate with organisations beyond the walls of the College. Often, these collaborators are commercial enterprises – design companies, manufacturers or retailers – but 2017 was different. This year, students explored the power of the ceramic material and its possibilities for social impact working with five charities and social enterprises. 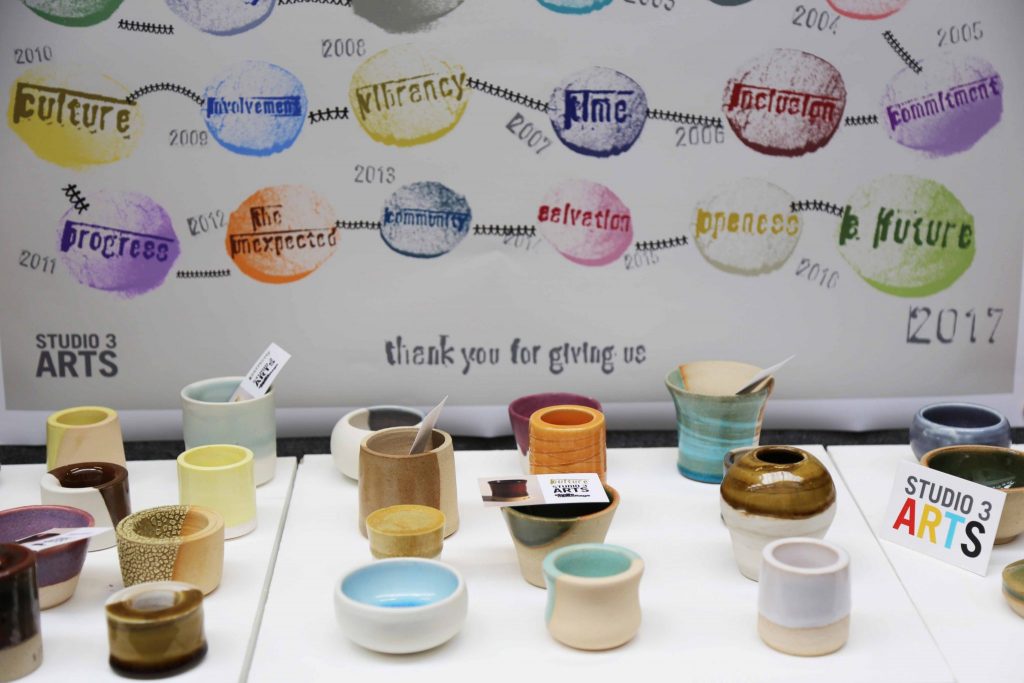 Series of vessels by BA Ceramic Design students for Studio3Arts

The results of those five projects are on public show in “What Can Ceramics Do?” at the British Ceramics Biennial in Stoke-on-Trent, until 5 November. As the exhibition launches, we talk to Stage Two Leader, Emma Lacey about the results and resonances of this year’s projects.

From the experience of dementia or the stigma of menopause to the impact of urban regeneration, these five projects span subjects but all challenged the students to connect community with clay.

“Most clients wanted to see what we could do,” says Lacey of the initial briefs set by the clients – namely, Dalston Eastern Curve Garden, UCL Dementia Research Centre, Studio3Arts, Global Generation Skip Garden and Hands Inc. For many, this was their first time collaborating with students and so instead of prescribing the desired outcomes, the projects often began with conversation and exploration. In groups of five, second-year students were introduced to their client, immersed in the particular location or community and then asked to devise and develop their ceramic responses. All happening over a short period of ten weeks.

Some projects resulted in public workshops and community engagement. For example, at Dalston Eastern Curve Garden – a much-used green oasis in London’s Hackney – the students combined conversation and clay sculpting to uncover the feelings of the Garden’s users. With the site facing redevelopment by the local council, the project required empathy: “They were clear that they didn’t want us campaigning on their behalf – it was a sensitive discussion of which they were in the middle but they wanted to reflect on the values of the garden”. A show-stopping large pot is inscribed with the voices – some whispered, some shouted – of visitors. Currently on show at the Biennial, the pot will be installed at the Garden.

At Global Generation Skip Garden, students talked with local schoolchildren over an afternoon of platter painting to collect visual and spoken reflections on their use of the space. 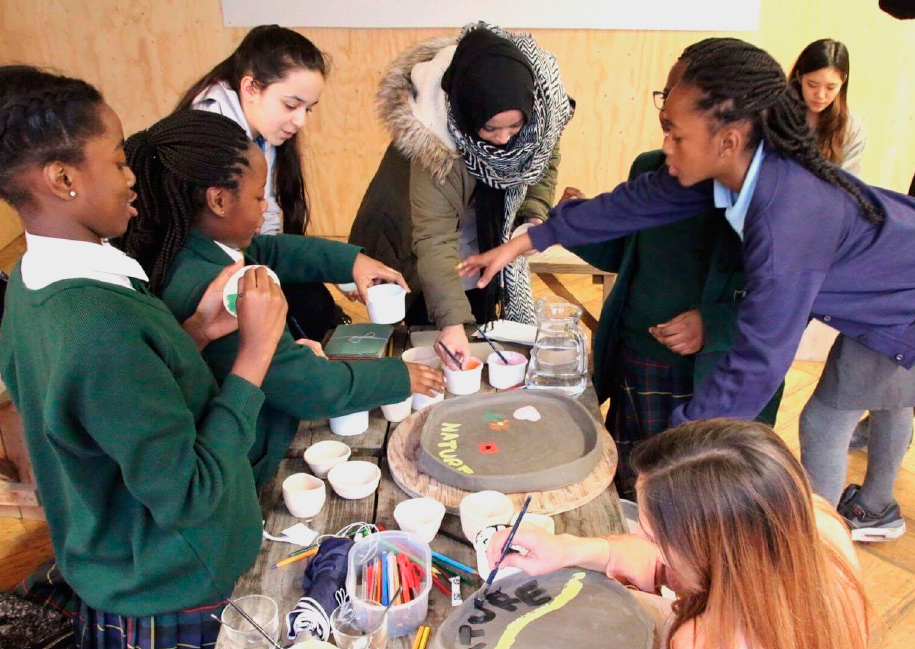 Other collaborations exploited clay’s expressive qualities. Students working with the ‘Created out of Mind project at the Wellcome Collection Hub, interpreted the experiences of dementia sufferers into a series of clay vessels – each one personal and distinct from the next. The vessel also appeared in the Hands Inc project. Working on the charity’s Reclaim the Menopause initiative, the brief focused on dispelling the negative connotations of the universal female experience. The resulting vessels not only represent women’s unique body forms in their menopausal age but it is hoped they will become family heirlooms passed from one generation to the next and a place to hold stories about the menopausal experience. 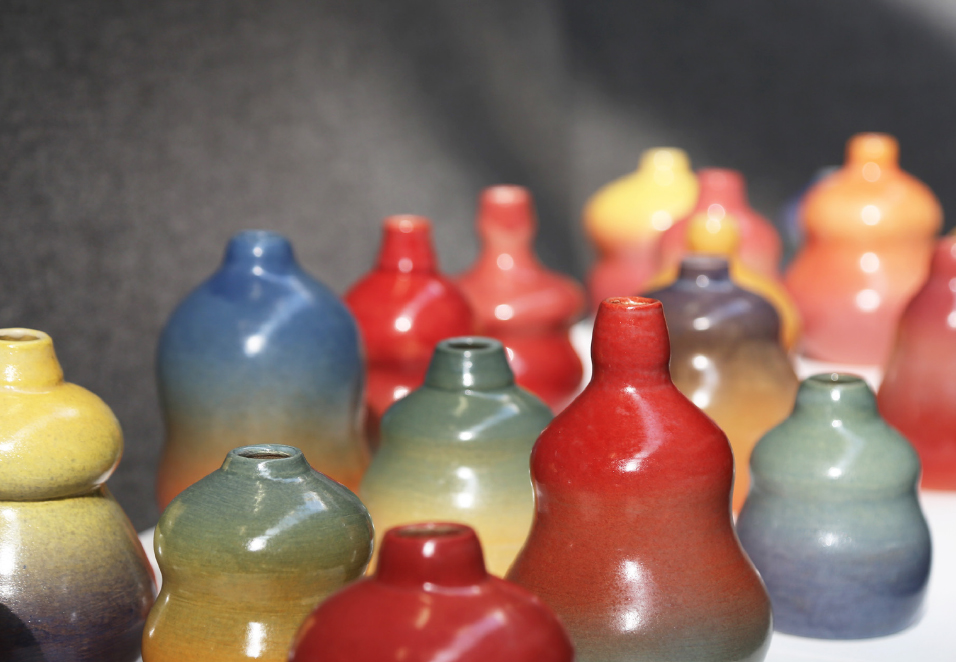 The final project, collaborating with arts organisation Studio3Arts began as a more traditional brief: to create gifts for Studio3Arts’ supporters to mark its 30th anniversary. Spending time at the organisation’s home at the Gascoigne Estate, the students decided against creating a one-size-fits-all object instead wanting to echo the many voices and connections they had experienced. Across 120 vessels, 30 different glazes and 3 clay bodies the broad creativity reflected that of the client.

One of the threads that recurs throughout each project is the nature of clay to reflect individuality. How, in one context, the material can be standardised and repeated and in another it can be unique and expressive.

I think that was the difference between this client project and the previous ones. It’s not about function and design directly instead all the projects wanted an expression, a voice for the people they were researching and representing.”

One of the outcomes across this series is a broadening of outlook of the students. “Often they collect textures or references to artists or designers,” says Lacey, “they collate their visual influences without realising that there is also a kind of ethnographic research possibility as well – meeting people, thinking about data and the wider world can inform your work visually.”

As happens in creative practice, the influence of one project bleeds into practice more generally. The students who worked on these projects now enter their final year studies with new-found skills in community engagement.

Often with a curriculum project it ends when it ends. But this time, nobody knew where it was going to go and we still have events coming up. The end of the project was last spring and it’s still rippling out. Organisations want collaboration and it’s a way that we can research and work so there’s definitely been an opening up to co-creation.”

“What Can Ceramics Do?” Is at the World of Wedgwood, Barlaston, Stoke-on-Trent, as part of the British Ceramics Biennial, 23 September – 5 November.