Throughout May 2015, Unannounced Acts of Publicness probed the meaning of ‘public’ in privately-owned public spaces and sought to offer alternatives. Hiding in plain sight, the acts drew attention to the behaviour of the audience as well as that of the performers.

In To hand in Granary Square, a lone performer carefully balanced his way across the square. Having watched the act, Academic Dean Mark Dunhill commented: “I became absorbed in the passers-by who either individually or in small groups stopped and paid attention, and others who walked straight past taking no notice whatsoever.

“The agile figure, positioned on plastic pots occupying a small area, momentarily highlighted the particularity of movement and human behavior across the whole square – and this for me was ultimately the most absorbing aspect of the performance.” 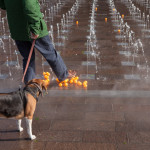 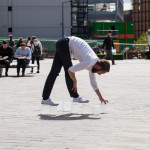 To hand in Granary Square by Siobhan Davies and Matthias Sperling 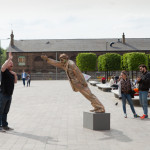 Samsh the State by Shaun Doyle and Mally Mallinson 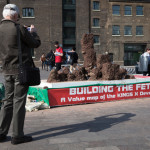 Building the Fetish by Dean Kenning 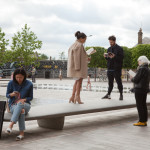 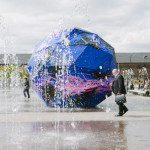 Sanctioned subversion
Some of the acts raised questions about recent developments to the King’s Cross area. Building the Fetish used dirt excavated from the nearby construction sites to create a map of value. The higher the mud tower, the higher the economic value.

With its similarity to the Saddam Hussein effigy torn down after the US invasion of Baghdad, Samsh the State highlighted how a statue’s significance can change with context. Student Rebecca Livesey-Wright reflected on the potency of a ‘subversive’ act that has been officially sanctioned, saying: “Ultimate power still rests with the authorities […] They decide which narratives will hold sway in public space, embodied in our public art.”