The Week That Was: 11 March

Metaphonica III arrived on The Street with “songs of protest and resistance”. Art, politics and live music collided resulting in this, this and perhaps most memorably this. We spoke Metaphonica’s curator Dan White before the event.

Fashion in Film festival began this weekend, with screenings and talks over the next two weeks.

Not one but two events for International Women’s Day. First up, Six Branch – a collaboration between BA Textile Design students and Palestinian embroidery collective Women in Hebron – launched. And then at Camden Council, ten local women presented films which they’d created in workshops with Esteban Gitton at Central Saint Martins.

“If something is outside ‘proper art’ that’s a good reason to run towards it,” Alex Schady, Programme Leader of Fine Art talks on the virtual reality sculptor.

The Big White Wall Project, a collaboration between BA Textile Design and MA Culture, Criticism and Curation, brought together Eduardo Paolozzi with discarded technology to create a large installation in the College, supported by Cass Art and Liquitex:

Talking about memorials – “how you make form to stop people forgetting” – architects Carmody Groarke discussed their collaborations with Phil Baines, Typography Subject Leader, BA Graphic Design. Baines worked on the letterforms for the architects on both the July 7 Memorial in Hyde Park and the Indian Ocean Tsunami Memorial at the Natural History Museum.

Now a prolific designer and artist, CSM alum Morag Myerscough spoke to Cath Caldwell, Senior Lecturer on the Graphic Communication Design Programme, about her work, the Design Museum, and her forthcoming book.

A round of applause for Nam Tran, graduate of BA Ceramic Design, for making it to (the very respectable) episode seven of the BBC’s The Great Pottery Throwdown. He spoke to the Crafts Council about his experience.

What does Brexit mean for the fashion industry? BBC World Service talked to MA Fashion students and Head of College Jeremy Till.

And finally, preparations begin for the Somehow You and I Collide, the MA Interim show of the postgraduate Fine Art course next week. See you there! 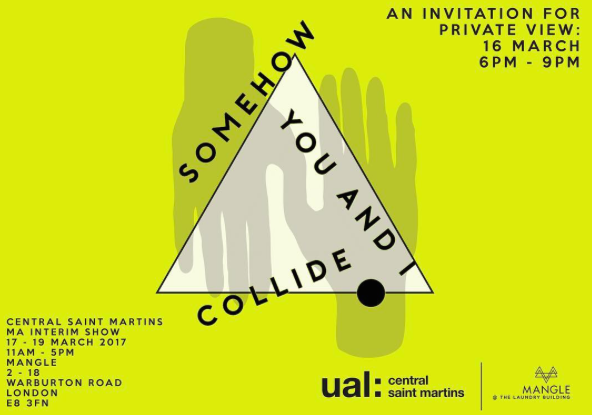