The Fix Is In

Angela Doane, Head of the College’s Museum and Study Collection, reveals the conservation process behind a wallpaper currently on show in Exposed

Before a piece from our Collection goes on public display there’s always work to be done behind the scenes. In the case of conservation, that work is often critical but invisible.

Our historic teaching collections tell us about past design and culture, but seeing and handling these objects inspires creativity today. In preparation for the current exhibition Exposed: Highlighting Historic Collections in the CSM Museum, conservator (and Camberwell College of Art alumna) Chloe Mills focused on three damaged wallpaper drops from the CSM Museum.

This wallpaper was designed by John Drummond, a 1949 graduate of the then Central School of Arts and Crafts, now Central Saint Martins. In the decades that followed Drummond established a studio workshop producing designs for among others Cole & Son, Sanderson, Hull Traders Ltd, David Whitehead and Philip Graf. His designs from this period play with myths and legends of the classical world brought to life in almost monumental scale on wallpaper.

The ‘Dionysus & Ariadne’ wallpaper drops were marred by tears, caused by years of rolling and unrolling the increasingly fragile paper. The tears breaking up the image details causing the viewer’s eye to be drawn to the actual tears rather than Drummond’s work. The larger tears also caused significant structural weakness risking further tearing when hung.

Often a conservator’s work can include undoing previous attempts to repair an object. With these wallpapers, various adhesive tapes had been used to patch up the tears, often aligned incorrectly. The tape itself had eventually torn and was detaching from the paper. This detaching removed layers of paper, called ‘skinning’. The adhesive residue had discoloured and stained the paper and the tape would continue to degrade if not removed.

The tape and its adhesive was lifted away mechanically using a micro spatula and hairdryer (conservators are nothing if not resourceful). A crepe rubber could then be used to remove the residue without abrading the paper surface. Tear edges were surface-cleaned with a soft brush and smoke sponge to prevent making a repair visually marred by obvious remaining dirt.

To repair the skinning of the paper caused by the detaching old tape on the tears, which increased its already fragile state, aged wheat starch paste was applied with a small brush on the underside of the skinned areas. The tears were then realigned into the correct position, smoothed over with a Teflon folder, weighted and allowed to dry.

Each repair was then reinforced on the verso with a very fine translucent Japanese tissue paper (Usimino 14gsm) using aged wheat starch paste. Tissue was applied following the tear line as well as perpendicular to it to provide more strength. Repairs were locally weighted using a very smooth polyester support material (Bondina), blotter and glass weights.

The result of this expert process, taking three full days, is that these beautiful wallpapers are now preserved for years to come. Come see them with their new lease of life in Exposed. 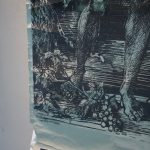 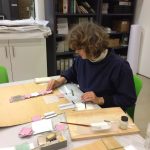 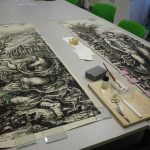 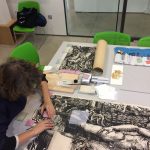 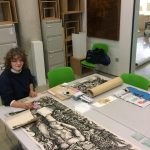 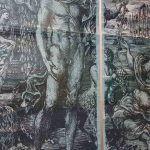