MA Industrial Design student Yuie Yu’s final project examines the perception of conflict in the post 9/11 era. The Terror Drill is a role-playing game workshop with three participants, a narrator and a suspect. It is designed to help people rebuild resilience through a series of emergency simulations. Bridging the gap between policymakers and the general public, Yu’s project encompasses a wide range of key players – from first responders to training teams. An open-ended workshop, The Terror Drill explores the ambiguity of fear and the shared common sense of terrorism. Here, she talks us through five instances of what she terms “the fearing public” which have shaped both our perceptions of terror and the formulation of her project. 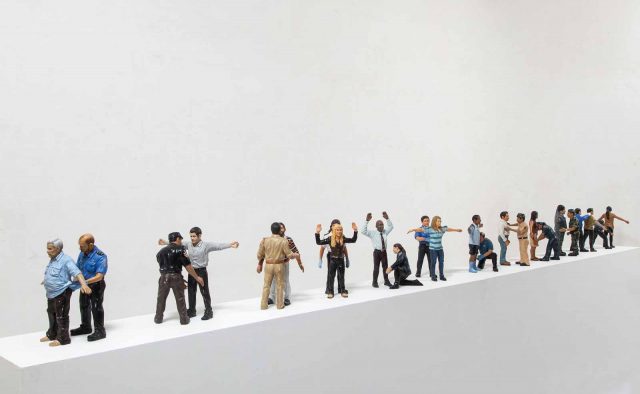 The image of the collapsing Twin Towers engulfed in flames is now an iconic image. It has played a large part in shaping the public’s perception of terrorism. This does not only stem from the catastrophe itself, but also how life has been directly affected since: the sorrow of losing the beloved, the shock of the aftermath, the fear of an uncertain future. Indian artist Jitish Kallat’s Circadian Rhyme 1 was on show in the recent group exhibition Age of Terror: Art since 9/11 at The Imperial War Museum. Kallat’s work depicts the postures that are now the language of airport security. This showcases how the control of security against risks or attacks has infiltrated daily life, affecting the scores of people at airports every day. The assassination of Kim Jong Nam could be said to resemble something from a TV melodrama. Kim Jong-Nam, the half-brother of the North Korean leader Kim Jong-Un, died after two women smeared his face with VX nerve agent at Kuala Lumpur airport. The investigation is still ongoing; however, it has been suggested that the assassination was carried out under the command of the North Korean government. The two female suspects have claimed that they were under the impression they were playing a TV prank with a hidden camera. However, I am not necessarily interested in focusing on conspiracy theories or political plots. The suspects in this disruptive case where two “ordinary” women, one of whom worked as a spa masseuse. So, they can be viewed as “untypical” terrorists, who have both pleaded innocent to the charges, despite the action taking place in an airport, which is a very public environment full of people.

This case has broken the “stereotypes” of terrorism. Looking at Đoàn Thị Hương’s Facebook profile, it would be difficult to have imagined her being linked to a potential terrorist attack. She was a young woman who dreamed of becoming a celebrity. The Kim Jong-Nam assassination case has revealed the potential malleability of crime motivations. It has planted a seed of fear among the general public, as it indicates the possibility of anyone becoming a terrorist – whether knowingly or not. The strategy here, if we follow the statements of the women involved, was to take advantage of the innocent, using the image of a young woman to disguise the reality of a deadly attack. Griffin, A. (2017) Oxford Circus incident – as it happened: Police say no evidence of gunshots or attack in central London. Available at: https://www.independent.co.uk/news/uk/home-news/oxford-circus-live-london-latest-updates-incident-news-police-central-today-reports-a8074581.html (Accessed: 21 June 2018)

On the afternoon of the incident, Oxford Circus was as crowded as always, shops were amassed with visitors. I was a few blocks away from the scene, picking up materials. As I was about to step out of the fabric shop, I witnessed passengers running in the street, some of them even came in and took shelter. No one knew exactly what was happening at that exact moment. Everyone followed the herd mentality of running away from something dangerous, which may have just been an illusion.

Some claimed they heard gunshots, others thought it was a terror attack in Selfridges. There were various versions on twitter but, the truth was not known. In reality, the incident involved two people fighting in Oxford Circus station. It was the rumours which created and magnified the anxiety, it was a prominent catalyst of fear which heightened the effect. However, this public disorder also indicates an infertility of resilience, representing a potential collective loss of faith in how authorities maintain social security, as well as the establishment system. In 2010, the Philadelphia-based architecture firm KieranTimberlake won the competition to design the US embassy in the UK, for their defensive strategy of hidden constructions in the landscape. Despite its impenetrable security standards, the design was associated with the keywords: transparency, openness, and equality. The new £750 million embassy fortress, completed in 2017, has six-inch-thick glass which is able to withstand the most fearsome bomb attack. This highlights a new horizon of the extension of fear into architecture and urbanism.

The building description elicits a feeling of conviction and confusion: is the construction a fortress built for security or out of fear? In my opinion, the defensive system represents a passive and unconfident status quo, indicating a self-deceiving psychological implication that problems will go away if ignored rather than confronted. While it is understandable to be cautious and remain vigilant against risks and potential threats, building a “fortress” also can convey a sense of isolated self-preservation ­– what about the infrastructure and citizens outside the building? Does the architecture of Noah’s Ark really exist?

“However, the architecture will serve as a stage of terror, a medium of its enactment-the basis of an unholy arrival of war in the place of Heimlich. There is nowhere to run. The stranger is already within the gates; the walls merely serve to hold us in.” (Comaroff, 2016) 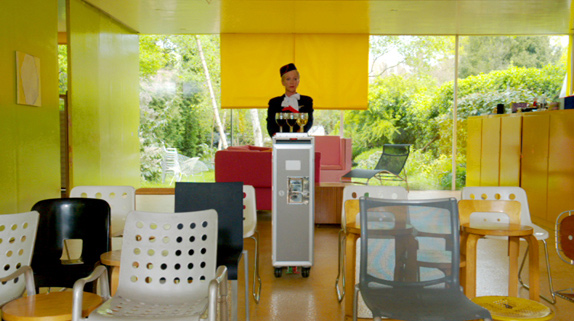 Noam Toran’s Desire Management is a film comprising five sequences in which objects are used as vehicles for dissident behaviour. In the film, the domestic space is defined as the last private frontier, a place where bespoke appliances provide unorthodox experiences for alienated people: An airline hostess with a unique relationship to turbulence, the owner of a mysterious box which men ritually visit to look inside, an elderly man who enjoys being vacuumed, a couple who engage in baseball driven fantasies, a man who is forced by his partner to cry into a strange device. The film is based on real testimonials and news reports, and the bespoke objects are an attempt to reveal our inherent need for expression and identity in the face of conformity.

In the turbulence simulation, a bespoke trolley is designed with intricate details: automatic motors with a “wobbling” effect and foot pads made especially for high heels.