With Show Two: Design now open, we talk to exhibiting design students about their work and the inspirations behind it.

For her final MA Narrative Environments project Sachiko Osawa presented Yami-ichi, an auction with a difference. Challenging the perception of art as a commodity, Yami-ichi saw artists exchange their work not for money but other people’s skills, services and objects. Here Sachiko recounts some of the most unusual and intriguing exchanges from the auctions in both Tokyo and London. 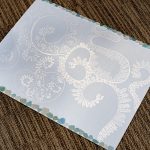 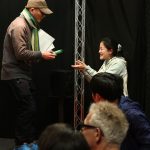 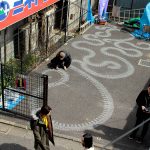 During the event in Tokyo, Atsuo Ogawa, one of the participating artists drew a beautiful and meticulous line with chalk across the pavement in the open air public space which used to be a part of Shimokitazawa market. This artwork proposed questions about the value of documentation over memory and the permanence of both. Atsuo auctioned a series of photographs showing the process of his drawing up until the point in which the artwork was erased and as part of the exchange he wanted the bidder to create a new artwork using the memories of his live drawing. Ayane Kato who won the bid, took inspiration from Atsuo’s meticulous work to create a “welcome board” for her wedding, which took place a month after the auction. The final piece was beautifully made and shared with Atsuo.

Ayane said “It was an amazing experience. I could enjoy Ogawa’s artwork, but also I could understand the philosophy behind his work by drawing by myself.” 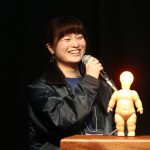 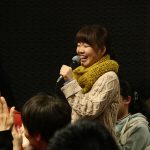 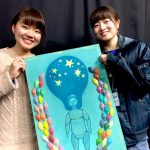 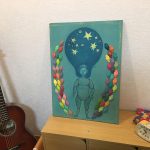 2) Singing coaching and an invitation to debut performance in Tokyo

As part of Mariko Kakinaga’s, another participating artist in YAMI-ICHI Tokyo, presentation she told the bidders that she wanted to learn to sing. In exchange for her artwork, Maya Makino, a young singer who had come along to the auction, offered free coaching for singing and an invitation to her debut performance in Tokyo. Mariko decided to take this offer in exchange of her work and in April she went along to Maya’s first performance in Tokyo.

Maya says “Before I went to the auction, I was not sure what it was like and I was going to just sit there and watch because I had never been to art auction before and my image of the auction was very prestigious and something far from me. But it was such a lively atmosphere, I felt at home. What fascinated me is that it was an encouraging and rewarding experience for me to think really hard about what I can offer to artists and realise what my strength or special skills are.” 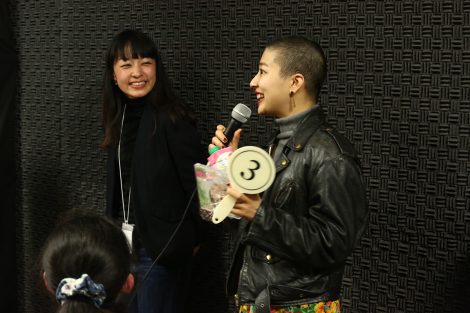 3) Support for setting up a debut exhibition in Berlin

Mariko also auctioned another piece of work at the auction for which she was offered support for setting up her debut exhibition in Berlin. In her presentation, Mariko talked about her future ambition to go to abroad (particularly to Berlin) and carry on her studies. Coincidentally there was Haruka, a girl who just moved to Berlin and trying to start her new career, in the audience. Haruka offered her support for setting up an exhibition in Berlin in exchange for Mariko’s work.

Mariko graduated from Tama Art University this year, and now she is travelling around Europe including Berlin, and preparing for her exciting future. 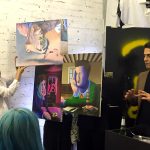 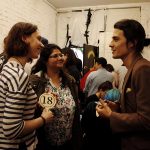 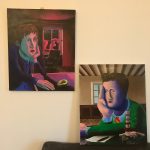 4) Accommodation in a Himalayan retreat

Nicola Bergamaschi presented a series of paintings which focus on fictional characters in interior spaces where time seems to stand still. Nicola’s proposed offers included “collaboration opportunities with anyone with skills at VR programmes”, “a holiday/residency in Jamaica”, “a nice place for my next exhibition” and more.

In a variety of the offers, such as “teaching my skills of Virtual Reality”, “a weekend in Berlin” and “collaboration with musicians”, his favourite offer was “free accommodation in a Himalayan retreat! Agnieszka, who bid this offer said “I loved Nicola’s artwork because of his unique way of using light, bright colours. The atmosphere of the painting were nostalgic and also evocative. The personal relation with artists and bidders was the most interesting aspect of Yami-ichi auction, it allowed people to focus on the background story and the artists themselves. “

Nicola’s paintings are now in Agnieszka’s flat and Nicola is excited about his trip to the Himalayas! 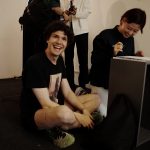 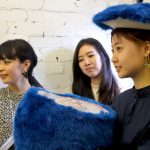 5) Free studio space for your next exhibition in London

Jing Tang, recent graduate from Royal College of London auctioned her sculpture in YAMI-ICHI London. Her works centres around absurdity and reality. At the auction, she was after “working opportunity with artists based in the UK”, “lessons in how to play the harp/make ceramics”, “a studio space for my project”. Among the variety of offers made, her favourite was a free studio space for her next exhibition in London, because it has been quite hard for her to find a perfect (and affordable) space for an exhibition.

Jing exchanged a contract sheet with a bidder Giacomo, who has a studio in London. We are looking forward to hearing about both Jing’s and Giacomo’s new experience in the space!