In 2011, a study by academics at the London School of Hygiene and Tropical Medicine examined Cycling and the City and why “In London…cycling is disproportionately an activity for affluent white men.” In response to the invisibility of women in cycling culture, BA Textile Design student Jessie McGuire has created a bold, “feminine” collection of versatile performance cycle-wear pieces. McGuire addresses the issue of female under-representation within the sport by targeting women of all ages, cultures and cycling abilities. For her collection, she used varying techniques including screen printing, digital printing and bonded different fabrics using vinyl. Here she talks us through five elements of her collection and how they target the wider political issue of female representation in a male-dominated sport. 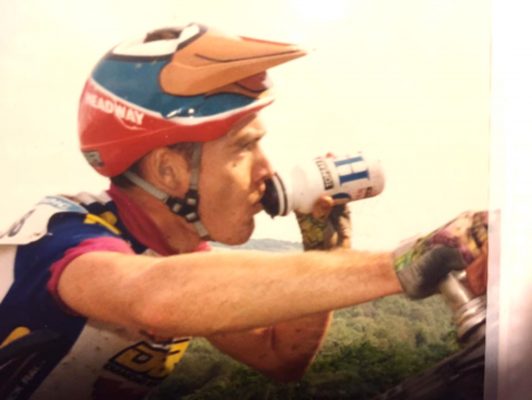 Coming from a family of competitive athletes, I have grown up around cyclists and runners. I have experienced first-hand the physical and mental health benefits that sport can facilitate. As a starting point for my research I was inspired by a collection of family photographs featuring my grandfather, uncle and cousins’ cycling careers – it is a sport that has been passed down through three generations of my family. In the development of my project, I investigated this idea of heritage through illustration and print. My family photographs, ranging from cycle trips and races from my grandad’s generation to present-day, heavily inspired the colour palette and humorous nature of my final collection. 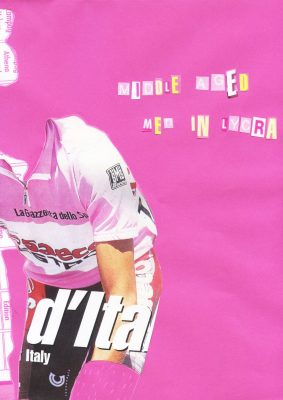 Some of my prints use text to explore the social issues surrounding cycling – often in a light-hearted and comedic way. I incorporate common phrases, such as “middle aged men in lyrca” to draw attention to and subvert the social issues within the cycling community. I was originally inspired by a collection of vintage weekly cycling magazines, adopting their graphic aesthetic. The quotes describing the relationship between the worlds of men’s and women’s cycling are taken from interviews with female cyclists that I conducted. “Shrink it and pink it” defines the ethos of women’s modern cycle-wear – how it is adapted from and made in relation to menswear, rather than in accordance to women’s needs. “Testosterone fuelled pack activity” is a reference to the racing world, indicating the view that it is non-inclusive. 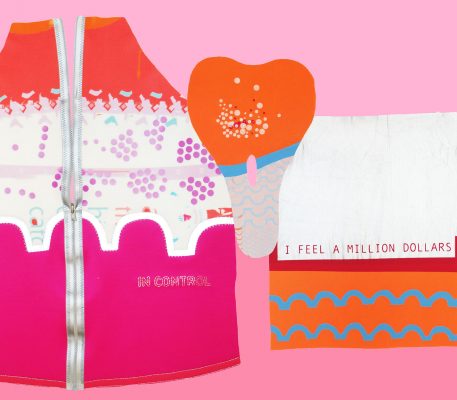 3. I Feel a Million Dollars

Cycling and other physical outdoor activities can foster huge benefits for our physical and mental health. Cycling also encourages a sense of adventure and exploration of space – it is a great tool for well-being. Lack of confidence and fear can hinder this. I asked female cyclists the question: “How does cycling make you feel?” The resulting answers included keywords such as: strong, liberated and in control. I included the phrase “I feel a million dollars” in this textile sample in order to remind women why they cycle and how it can make them feel, eradicating fear and feelings of intimidation. The incorporation of these quotes from female cyclists is an attempt to increase confidence and provide inspiration before a ride. 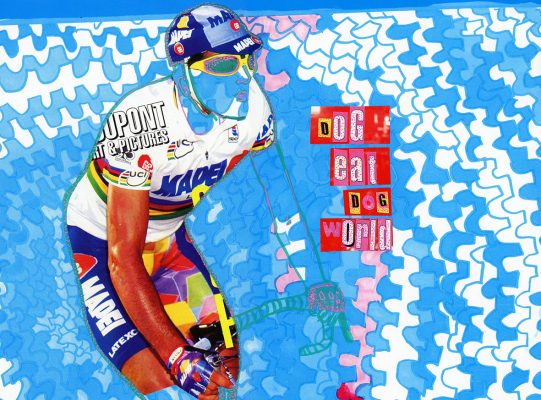 I interviewed Tim Buckle, a retired Team GB cyclist and junior coach who told me about the world of elite cycling and what inspired him to take up the sport. He described watching Stephen Roche in the 1987 Tour De France dramatic finish as he reached La Plagne: “I flicked channel 4 on and it happened to be this epic stage race, Stephen Roche flaked out and needed oxygen. The drama of it, how cool this guy looked, the colour, everything about it was fantastic. That’s what I wanted to do for a living.” The nostalgia and excitement of the competitive cycling world was another big inspiration to me as the project developed. I used graphic imagery and lettering to retain this sense of spectacle, adventure and excitement. For me, it was imperative to create functional products with a high level of performance alongside the design and concept. I drew upon my research into cycle wear brands, using stretch fabrics for ease of movement, reflective elements for safety on the road and mesh panelling for breathability. Paralleling textures, shape and patterns from initial drawings of bike parts and mechanics, I used techniques such as layering and bonding. I combined sport fabrics with reflective vinyl, printed scuba fabric and lycra. By exploring the use of zips and fastenings and joining fabrics with different properties, I could produce a seamless construction. These modern material choices are combined with an illustrative style of print, textures and details in order to produce a “feminine” aesthetic. I was also inspired by The Red Hook Criterium Series by Specialized – a custom-printed collection for an elite cycling team. The collective look includes a coordinated bike, helmet, skin suit and accessories. Intrigued by their bold colourful collection, I completed my final collection with a matching screen-printed leather bike set.