As our students prepare for the opening of Degree Show Two: Design on 20 June, we take a closer look at their final projects and the inspirations behind them.

BA Ceramic Design student Harriet Nourse’s project, Romance or Gamble, is a celebration of twentieth-century female ceramicists. Inspired by her great grandmother Constance, who Nourse only discovered was a potter after she applied to study Ceramics at Central Saint Martins, the project began as a way to slowly uncover more about her life. Through her research, she came across other female ceramicists who were practicing at the same time as her great grandmother – some of whom may be well known but are not necessarily acknowledged for their contribution to modern day ceramics. Using the practice which connects them all, Nourse has created a series of large ceramic vessels which act as portraits of the often overlooked female artists. Here, she talks us through the skills and careers of five of these women, and her interpretations of their work. 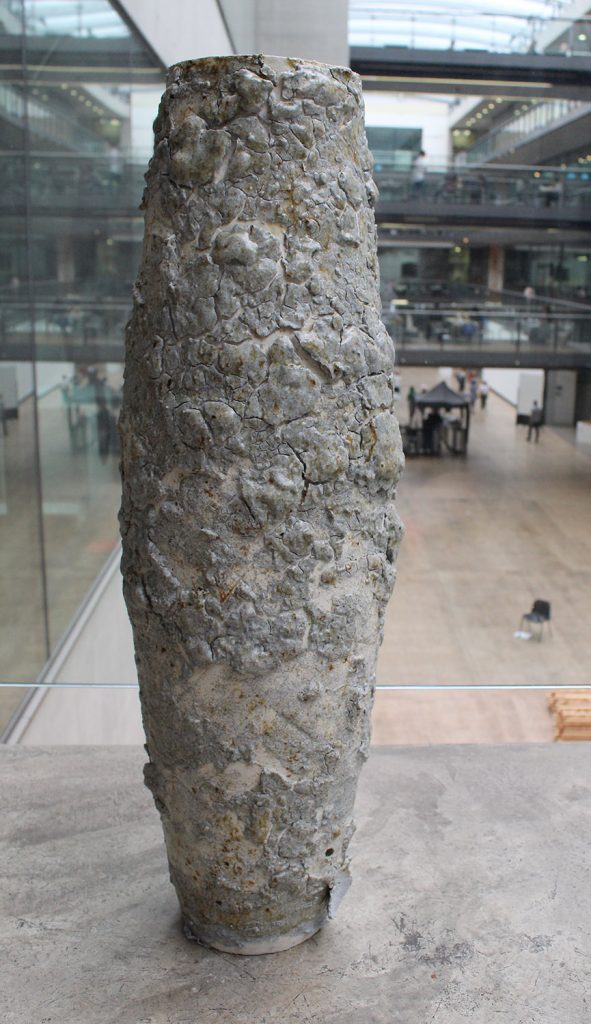 Denise Wren was a great personality who defied gender boundaries. She taught short courses and published books with her husband Henry Wren. Their publications, such as Pottery: Finger-built Methods and Handicraft Pottery, championed hand-building processes, as well as other traditional techniques. Whereas, Pottery Making: Making Pots and Building and Firing Small Kilns, taught potters how to work independently – something that had not been done before. Despite the fact she was an inﬂuential ﬁgure in the British Studio pottery movement, Wren is often written out of history. My cylindrical form is inspired by the simplicity of her work, while the surface mimics the earthy tones seen in her glazes. I felt Wren was a woman who needed to be remembered not only for her contributions to the ceramic world but as a person with a brilliant personality. 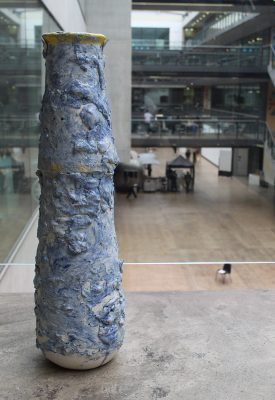 In the early 1900s, Dora Lunn was a much-needed breath of fresh air in the ceramic world. She founded and ran a successful studio in Hammersmith, both employing and teaching women. She continued to run the studio throughout the course of the First World War despite the economical struggles she faced. In response to teaching these women in her studio, she designed the Ravenscourt Potter’s Wheel, which was later patented and manufactured on a large scale for use in art schools and by independent potters. She was also the ﬁrst woman to exhibit at the British Industries Fair.

Sadly, despite all her achievements Lunn is almost exclusively referred to as the daughter of Richard Lunn who taught ceramics at Camberwell School of Art and the Royal College of Art. It was because of this I decided to celebrate what an incredible woman she was in my work. Her forms are full of character and were often brought to life through the use of brightly coloured glazes, which I have emulated here. As the most colourful and interesting shape in the collection, it’s hard to miss, highlighting what a truly unique character Lunn was. 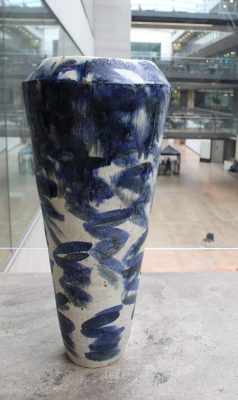 Despite her influence on ceramics over a period of fifty years, Dora Billington is best known as an educator and teacher. She was extremely knowledgeable in both studio pottery and mass-produced ceramics, which was uncommon at the time. Using the combination of her vast knowledge and openness for the modern, Billington created one of the most liberal and innovative ceramic courses in the country – at the Central School of Arts and Crafts, which in 1989 merged with Saint Martin’s School of Art to form Central Saint Martins. Alongside her teaching career, Billington also wrote and published two books. The Art of the Potter changed the course of writing on ceramics. A departure from the ‘how to’ manuals of previous publishers, it discussed the aesthetics of contemporary work and placed it in the wider context of historical ceramics. Although she produced ground-breaking work, Billington was quickly forgotten.

This pot stands boldly, highlighting a woman who was not to be deterred from her beliefs. The surface is different from the rest of the pots in the collection, in homage to her incorporation of majolica freestyle hand painting. Billington was a woman ahead of her time – she should be celebrated as an innovator who was willing to embrace a new world of ceramics. 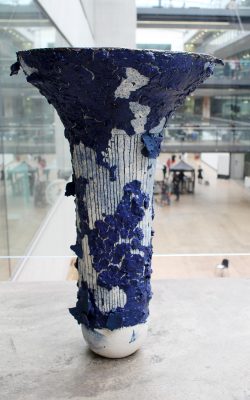 Lucie Rie is a well-known and celebrated individual within the world of ceramics. However, although she contributed greatly to technical advances in the ceramic world which we now take full advantage of, she is often only referred to in relation to her male contemporary Hans Coper. Rie was a woman of determination who stood her ground, often rejecting advice from leading, male ceramicists such as Bernard Leach and William Staite Murray. Having coined the term “Urban Potter”, in which home and studio were united, she introduced a new style of ceramics: thin walled vessels with minimal decoration. This was a far cry from the works of Leach and Staite Murray. Her unique surfaces not only paved the way for modern ceramics, Rie was also one of the ﬁrst female ceramicists to use kiln and wheel technology as a tool to achieve her end result.

Rie is often cited for her deliciously delicate bowls, including extravagant ﬂares on her bottlenecks. Inspired by Rie, this pot incorporates her characteristic design elements. The use of sgrafﬁto lines are also synonymous with Rie’s work and here can be seen on the surface under the peeling blue. As a woman who was never afraid to stand by what she believed in, Rie could be both an alarming and delightful presence. It’s time to truly appreciate the tenacity, gumption and determination of Lucie Rie. 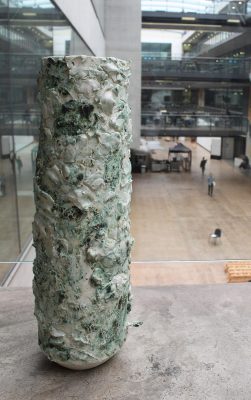 Constance Wade is the least well-known figure in this collection and yet is the woman who inspired it. Although her ceramic career was short, she proved herself to be just as capable as these other women. She was often praised for her pottery talent and cited as being in the same league as Leach and Staite Murray.  Working alongside her husband Dr Dunn, Constance managed to recover a Chinese glaze recipe that had been lost for over 5,000 years. Much like the other pots in this collection, both form and surface have been directly inspired by her work. The simplicity of form reﬂects Constance’s own shapes, while also accentuating the foot ring. The colour mimics the green she used on so many pots – a colour commonly used in ceramics due to the prevalence of ash glazes. As a woman who had such a promising career it’s tragic that she has now been mostly forgotten by ceramicists – although, like all these women, her work is in the V&A collection. Constance deserves to be remembered alongside the likes of Rie, Billington, Wren and Lunn. She was a woman who contributed to the studio pottery movement, and without whom this collection would never have taken place.