We spoke to Katrina Felice and Rosemary Millbank, two of the third year BA Performance Design and Practice students who saw their designs take to the stage last week as part of the English Pocket Opera Company’s production of Verdi’s Macbeth.

Continuing the ongoing collaboration between CSM and the English Pocket Opera Company, eight students designed the full set and costume used throughout the production.

Speaking to Katrina and Rosemary, we heard about the inspiration and ideas behind their costumes designs for King Duncan, his procession and the set itself.

What were your initial ideas about the set and costume designs for this opera performance of Macbeth?

Rosemary: We were encouraged not to research that much to respond organically. After listening to the music and some sketching I realised my designs had a Russian Orthodox flair.
Katrina: After listening to the opera for the first time, the image that came to my mind was the witches emerging from a giant acidic green pipeline wearing oversized magenta and orange 80’s party dresses!

What research did you do?

Rosemary: I watched a DVD of a Swiss production, more for the music than for design inspiration, in some ways I regret that as inevitably the designs from that production started seeping into mine.
Katrina: I researched processions from all over the world – from looking at the shape and colour of their clothing to the way in which they moved together.

Were there certain aspects of the story or characters that you focused on through your designs?

Rosemary: I wanted to draw on Macbeth’s motivations – without the witches’ encouragement, would he have still murdered his way to the throne? And what does it say about him and Lady Macbeth that they have no children, no one to continue their line after they work so hard to get it?
Katrina: I wanted King Duncan and his court to be characters of kindness and beauty – this kingdom was one of peace emphasising the selfishness of Macbeth’s intentions to kill Duncan and inflict war. Because King Duncan and the attendants are silent throughout the opera, I wanted to draw upon the notion of love for the royalty through the costumes.

Did you collaborate with each other for the designs?

Rosemary: Absolutely – you can’t not collaborate in a show of this scale.
Katrina: The stage design came after each designer presented their preliminary visuals, so I was very much influenced by the moods and atmospheres created within their designs and used this to fuel the design of the floor.

How do you think costume and set design impacts a performance?

Rosemary: It’s an opportunity to build a world beyond the text you’re using, or for the designer to offer an alternative reading of the subject matter. It’s integral.
Katina: I think costume and set design provide the context for performance. Together, set and costume create the world in which the performers inhabit.

Do you have any plans for future set and costume designs?

Katrina: At the moment I’m researching ideas for a set design somehow containing all the elements of a house – floor, ceiling, window, door and staircase as one.
Rosemary: I’ll be co-designing a section of a promenade piece inspired by Madame Butterfly at the Royal Albert Hall in March, and a collaboration with a DCL director in May. 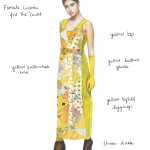 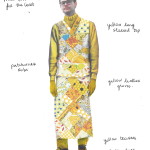 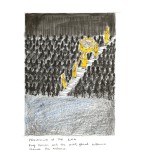 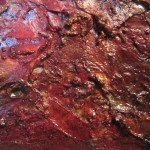 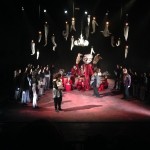 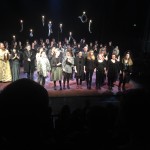 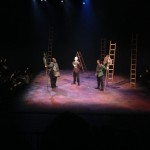 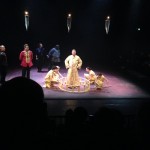 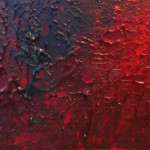