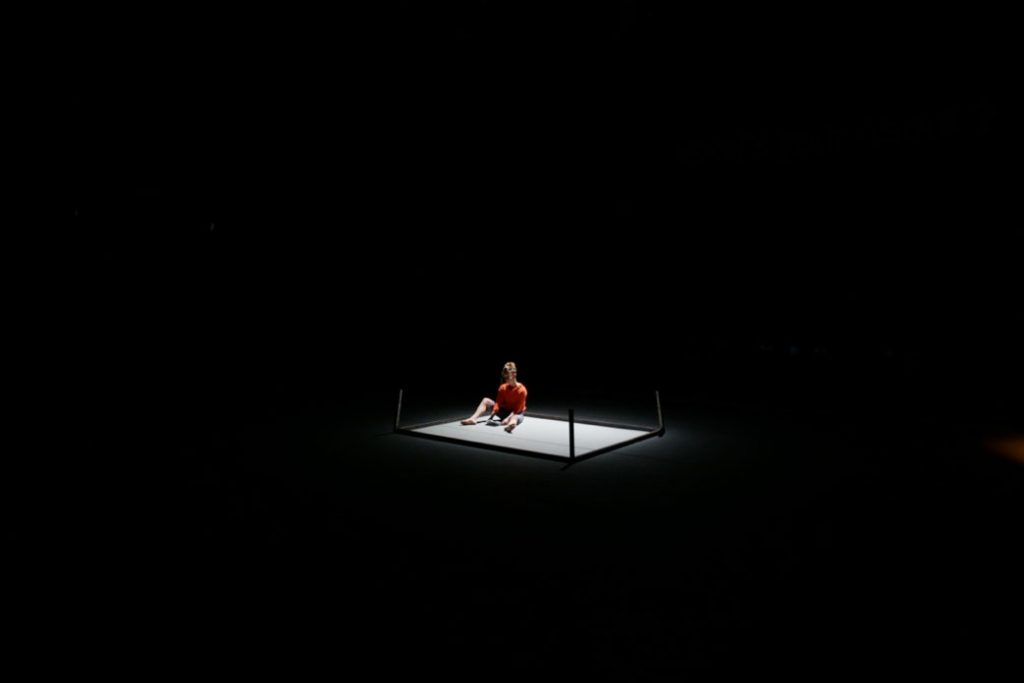 Each year our BA Performance: Design and Practice students produce a series of experimental performances in collaboration with BA Fine Art students as part of “Practice Exchange”. Over the course of three months the students collaborate, bringing their areas of expertise together to test new ideas and concepts before presenting the final pieces to a live audience in the Platform Theatre.

Last year Jotdown Productions, a collective formed of BA P:DP students Jordan Chandler, Dorothy Graham and BA Fine Art exchange student Miranda Dahl , presented Haidar as part of Practice Exchange’s performance series CSM aLive. Set in the context of a war-torn country, Haidar tells the respective coming-of-age stories of a young boy and young girl growing up in similar worlds. Structured around the on-stage creation and destruction of a large metal sculpture, the piece brought these stories alive through choreography and an original score. Now, six months on, the collective will be taking the performance to New York where they’ll be developing the piece and finally performing it at PRAT Institute in April.

Here Chandler tells us about CSM aLIVE and the story behind this ambitious piece.

Can you tell us how you became involved in the CSM aLIVE project?

Chandler: Practice Exchange is a loosely structured programme which allows students to explore, experiment and play around with the concept of performance. In the second term, a selection of BA Fine Art students are invited to share the performance space and collaborate with BA P:DP as an art form.

My role was to curate and manage the festival at the end of the project, which saw each collaboration share their work over the course of three nights. The work was divided into three categories: durational performance work, which was set up similar to that of gallery structure where audience members could walk freely around the space and come and go as they pleased;  The Variety Show, a 90 minute sit-down job, consisting of 10 minute pieces that transitioned together to create ‘One’; and, on the Festival’s final night, we had three larger scale pieces of work, 20-30 minutes long. This category featured our piece Haidar.

Tell us about Haidar.

Chandler: It’s a physical theatre/dance piece that explores innocence in a war-torn context.

Haidar was born from a project Dorothy and I started this time last year in Venice, Italy. We squatted in an abandoned hospital with a community of North Senegalese immigrants for 10 days, making art installations, sculptures music, food and lifelong friends. We built them a sculpture of a lion, which is an emblem of the North Seneglese ethnic group, it stands for strength and endurance.

After returning home to London, we knew we wanted to make a performance piece that dealt with themes connected to our experiences there. So, we built the five-metre tall structure and started researching themes around masculinity and immigration. We gave workshops in Bristol schools to 10 year olds around the theme of masculinity, and asked the children to make drawings and write letters in response to questions we gave them.

This is where we met Haidar, a 10 year old Syrian refugee, whose answers blew us away. His sensitivity and emotional intelligence was leagues above everyone else’s. As a collective, we took an interest in the simple explanations children often use to understand their surroundings. Influenced by the refugee crisis, Jotdown created a coming-of-age story that defines adult themes through a child’s eyes. After a mountain of research, we discovered coincidentally that the Arabic name ‘Haidar’ translates as ‘lion’, bringing us full circle to our initial sculpture we built back in Venice.

Our show is structured as a palindrome, a phrase or sequence of words that reads the same forwards or backwards. Never do we reference Syria directly; never do we reference the time in which the story is set. The palindromic structure illustrates an endless repetition of horrific events, happening all over the world across many generations. Time is not linear, but rather a pattern. History always repeats itself. How did your group begin working together?

How did working directly with Fine Art students affect your work/approach?

Chandler: When we were first introduced to the Fine Art students, it was in a presentation format. We met Miranda Dahl, an American exchange student who worked with printmaking and dance, we immediately asked if she wanted to help us develop the project. She joined our team and was a huge support. She choreographed all the dance sequences, she helped shape the work and the concept and gave Dorothy and I a new lease of life. If it wasn’t for her input, Haidar may not have made it to the final performance. 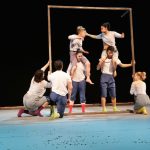 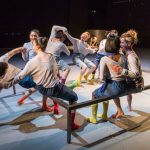 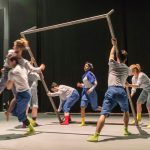 Do you normally work on such a large scale?

Chandler: It’s funny you should ask this, because someone once said to me, “if i were to define what you do in your work, it would be to play with scale”. I personally have always made large pieces of work, or worked with a large quantities of something. In a short film I made with Dorothy, there’s a scene where we cram 35 extras into a tiny shop window. Haidar for me was the climax, we made the sculpture and the overall scale of the show to fit the Platform Theatre, because we felt that now was a better time than any to make a large scale performance. We have time, space and the security to allow us to make something which at first feels totally out of our depth.

What were the challenges of designing and producing choreography for a piece of this size?

Chandler: The challenges were never creative. The real challenges were financial, practical and institutional. We struggled to convince people that what we were doing would work and be successful. We struggled to get a cast of 10 people all in the same room for a good amount of time (we had three days with our cast in total). The design and size of the sculpture, meant we had to have a large cast purely for the practicality of constructing it on stage – it was big and very heavy.

What are your plans for taking the show to New York? How will you work to develop the piece?

Chandler: Though we had a successful show in London within the university setting, we felt it was important to perfect the first half with fresh, new eyes and continue writing the second half of the narrative. In New York we’ve been working with a cast of individuals from all over the world from Armenia to Italy, Singapore and China. With such a broad spectrum of experiences to draw from the show has already progressed from its initial rendition in both storyline and choreography. With our upcoming New York tour, we have also reconsidered areas of our set to produce a more cohesive design. We are ultimately hoping to perform in Edinburgh Fringe next year and set-up a full-run in London.
Haidar will be performed at the Memorial Hall Auditorium in Brooklyn, New York from 6-7 April 2018, to find out more and book free tickets visit Eventbrite. You can stay up-to-date with Jotdown’s projects and performances by following them on Instagram, Facebook and Twitter.