Erika Tan, Pathway Lecturer in BA Fine Art 4D, speaks to us about Sonic Soundings, an interactive app she’s created as a sonic counterpart to the 57th Venice Biennale. Addressing ideas about echoes, redefining space, and transnational connections, the project is supported by Creative Unions and is a testament to the importance of borderless creativity.

Tell us a bit about what Sonic Soundings is.

The project is experienced on location through an app on your smartphone. It’s a free app, which tracks your location, and triggers specific sounds in specific places. The whole experience is under two hours, however, the works are mapped across Venice to capitalise on certain Biennale routes, between the Diaspora Pavilion, the Arsenale and the Giardini (the last two locations being the main Venice Biennale locations). Some of the works are singular audio pieces, to be listened to in one place. Others are sonic environments, which you walk and explore, and some works provide a sort of walking companion to Venice. All attempt to re-define their locations.

How did the idea for the app first come about?

I’m showing work in the Diaspora Pavilion in Venice this year and was interested in the various responses, reviews, and discussions around the Biennale in the context of current global border crisis. The Diaspora Pavilion, Venice 2017, was co-founded by David Bailey, Nicola Green, Peter Clayton and David Lammy, and curated by David Bailey and Jessica Taylor. In many ways it starts conversations, which reaches beyond the Biennale’s structural dependency on national pavilions, to see beyond the nation state or to provoke questions around the national. Sonic Soundings came out of these discussions with other artists and curators who felt these conversations needed to be explored further, and a closer connection to real lives and experiences be made.

The idea of working with an app was developed as a way to be in Venice, while remote. As a way of being in Venice, un-invited. As a way of being present. Of permeating this stronghold or pinnacle of art world platforms. Venice – the curated shows and national pavilion structures is for many artists something that is unattainable – not because their work wouldn’t find a place, but because they fall somehow outside of the structural concerns of Venice.

Sonic Soundings also ties in with the context of borders and migration. In January this year, a man drowned in the canals of Venice, while being watched and filmed. His name was Pateh Sabally, and it is understood that he was a refugee from Gambia. This tragedy is both particular and general, reflecting a personal crisis and an international one. The current migrant and refugee situation is part of a long history of movement in populations, for various reasons. Some which have over time been accepted and normalised, and others not so. Current diasporas are a present reminder of past sojourning. My own presence in the UK is based on several generations of global manoeuvring. Sonic Soundings started as a project in which these kinds of concerns were shared with others, the project developed as a form of response from artists and curators to these concerns – an echo as such. An echo that helps define or redefine a focus in Venice and in particular in an edition of the Venice Biennale which seems to have turned its back on the contingency of cultural practice to the political and social context in which it occurs. 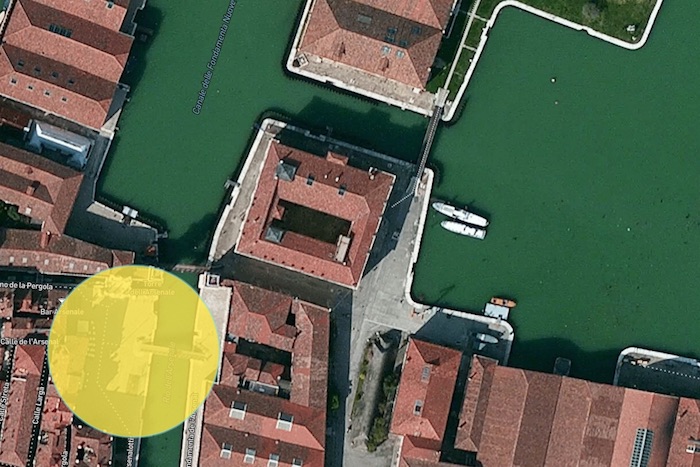 How can sound dismantle the idea of borders?

I’m interested in the capacity of sound to produce meaning through redefining space, or retelling narratives. The intrusiveness or un-invitedness of a virtual sound in space is particularly interesting for this project, where the ideas of borders, or national boundaries can be experienced by some as impermeable barriers, but to others fluid entry points. Sound travels fastest through water. The concept of an echo in terms of a reverberation of a political or cultural ideology comes to the fore in the curatorial intervention I have also made in the work consisting of a hidden sound work located virtually as a barrier of sound around Venice. It’s experienced only on the entry and exit points in Venice and consists of sounds of global protests – in particular protests with a pro movement, open border agenda, these sounds of protest whether in Germany, Tibet, Philippines, America take on a collect rhythm – gathering momentum sonically, feeding back into each other and making a sonic wall of sound. Is this containing, or protecting, agitating, or on the march?

Can you tell us a bit about some of the artists your working with? What thread runs between their works?

A sound released, an echo returns.
The depth of impact-making waves across a changing landscape.
Sound travels.

This initial ‘signal’ was sent out by me to various artists and curators – to see what kind of a response, or echo would return. I was reading Édouard Glissant at the time and interested in the notion of ‘archipelagic islands’ where connections are emphasised above the water that divides them. The sea bed is seen as a continuum. The responses or echoes, take shape as personal narratives and archives, critical responses to the Biennale, sonic insertions into space, works which are abstract in form, but through their location create new definitions of physical experiences of space.

Three works are dedicated in some form to the artist Khadija Saye, whose work is also part of the Diaspora Pavilion, and who died in the Grenfell Tower fire. These works, both memorialise her, as well as remind us not only of the tragedy of Grenfell, but importantly also of the harsh realities of the way in which borders (sociopolitical, cultural, race, class) maintain inequalities. Barby Asante’s work, for example, very poignantly, but pointedly connects institutional and state violence to the black female body.

Another contributor is Chi Bagtas, a final year BA Fine Art student spent last year working in the art world – doing internships etc. She ended up coming to assist me in the installation of my work in Venice and the work she created takes from her experiences and observations during this time – the form of the work is a letter to her grandmother back in the Philippines. Grandmothers and collections of experiences and sounds are also the focus of Lizza May Davis’ work, whose grandmother in the Philippines is also a focus part of the work. A song her grandmother sings in an archival sound file, is placed on the water around Venice pointing to an elsewhere.

What about the geography of Venice worked for this project?

In particular the routes between the major Biennale locations have been used, so that visitors to the Venice Biennale would be able to experience the work on the route between these spaces. Additionally, the Diaspora Pavilion has several works around it, as a way to connect to certain works and ideas as expressed here. Several of the artists in Sonic Soundings have also got work in the Diaspora Pavilion (Barby Asante, Susan Pui San Lok, Kimathi Donkor, Larry Achiampong, Abbas Zahedi, Libita Clayton), and one of the artists is representing a national pavilion (Tintin Wulia)

This project is supported by Creative Unions. What does borderless creativity mean to you? How has it played a part in this project in particular?

The project is international in scope.  The artists and curators, and designers have all experienced or continue to live with transnational connections as part of their daily lives. References to this occur in the works. Some of the artists have never been to Venice – and yet, this project format, has enabled this to occur.