With such tumultuous, and sometimes bizarre, political developments happening in the UK, and abroad, there are plenty of projects in Show Two that reframe and respond with a dose of humour.

Emma King, MA Communication Design, presents 1984 by @realdonaldtrump, a rewriting of George Orwell’s dystopian novel using tweets by President Donald Trump. It’s her first politically-oriented project and its origins lie in her interest in the relationship between published texts and the internet.

It was a struggle to narrow down all my thoughts into a project. But then Trump began giving out ‘alternate facts’ and Orwell’s 1984 rose up the book charts. So, could I fit these two texts together in a way that would unite meaning but offer a design authorship?”

The result is a scroll of tweets with one word of each highlighted in red, allowing the first chapter of 1984 to be read vertically. It’s a clash in one object, between the permanence of traditional publishing and the transience of digital communications, and, in an extension of that, the disparity between an enduring truth and a malleable one. Set exquisitely in Sabon typeface, the project not only cements Trump’s tweets, but also highlights the triviality and hypocrisy of his statements. “He’s tweeted all of these words, but I’m simply taking them out of context, which is exactly what he does. I’m using his own words to hang him with,” says King. The mix of humour and politics are in no short supply in MA Communication Design this year. Take for example Kathryn Basterfield’s Foreign Affairs, a satirical dating agency that pairs up UK residents with EU nationals as a work-around to retain some version of the free movement of people post-Brexit. Yasmina Aoun’s final project may have begun in a similar satiric vein, but transformed into something entirely heartfelt. As a Lebanese student in MA Communication Design, Aoun wanted to focus on her home country and soon was questioning her own feelings of numbness towards the region’s politics.

Our politicians extend their mandates illegally, we don’t have any power as people so we just keep our minds off it. The night life in Beirut has thrived so much – that’s crazy when you think about it. Lebanon is one of the world’s party spots. I love that escape when I go back. That was my starting point, to come to terms with what’s happening, to open up a conversation.” 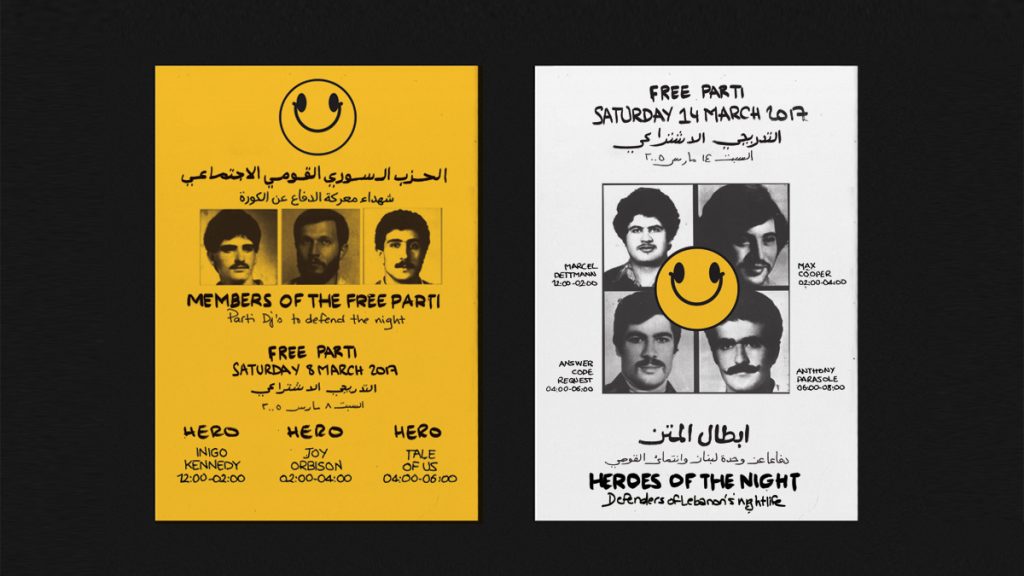 The result is her Free Parti movement, a magazine, record and poster series that places the nightlife culture in direct contrast with the ongoing instability and violence. A techno track is formed from the abstracted sounds of bomb blasts, a poster type more usually showing “martyred heroes” which in Aoun’s hands presents DJs as the “Heroes of the Night”. The enforced collision of the reality and the fiction comes into most sharp focus in the magazine. 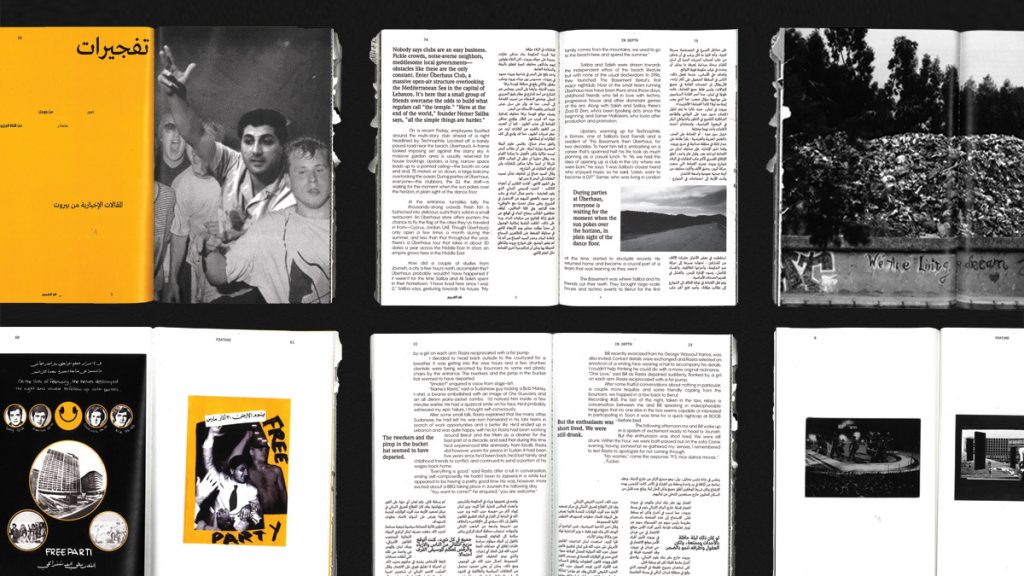 Presented in a bilingual format, an English article about a particularly excellent night out is partnered with what appears to English-speakers to be its Arabic translation, when in fact it is a news report about bombings or political corruption. Some pages are folded requiring the reader to tear the open, revealing photography of the scars of violence on the city, making the act of revelation both physical as well as metaphorical. Aoun’s work is part illusion, communicating its message directly to its intended audience while the rest read only its façade of Beirut’s partygoers.

Another graduating student has found inspiration in the same place. Sheryn Akiki, BA Fashion, created her final collection in response to reflections on her home country of Lebanon. Confronting similar questions about the willful blindness of the younger generation to wide political corruption and instability, Akiki created Blue Index 1.1, named after the act of marking voters’ index fingers with blue ink to prevent voting fraud.

They say history repeats itself in Lebanon because nobody changes anything. We keep voting for the same people. It’s the highest form of marketing.” 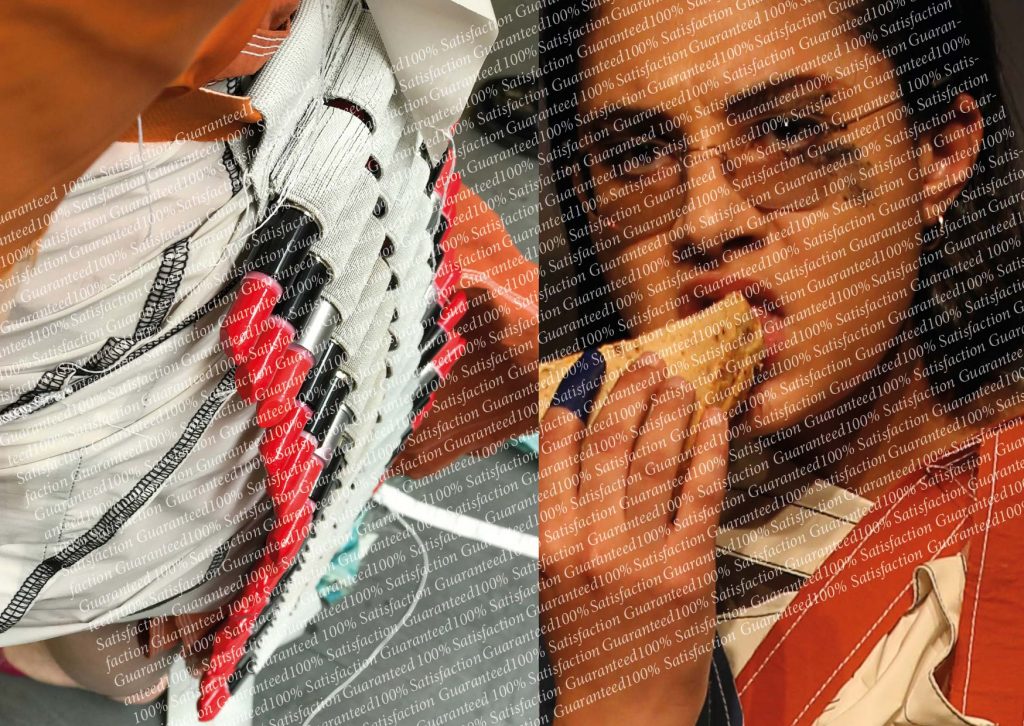 Interested in military clothing and propaganda, Akiki collected and dissected garments. Not looking at particular tropes, the designer was instead drawn to the psychology, how these clothes give the wearer power, as well as communicating a sense of purpose and conformity.

I use military techniques, but they don’t look like it, the fabrics are different, the silhouettes are feminine. I wanted to create the opposite to military wear, my collection is for women, they’re invisibly ready but look like a mess.”

Echoing Aoun’s Free Parti, Akiki’s collection presents a façade that intentionally obscures its true meaning. Her models look rushed, almost frenzied, clothed in garments that read as ad hoc, yet in truth they are prepared for anything. 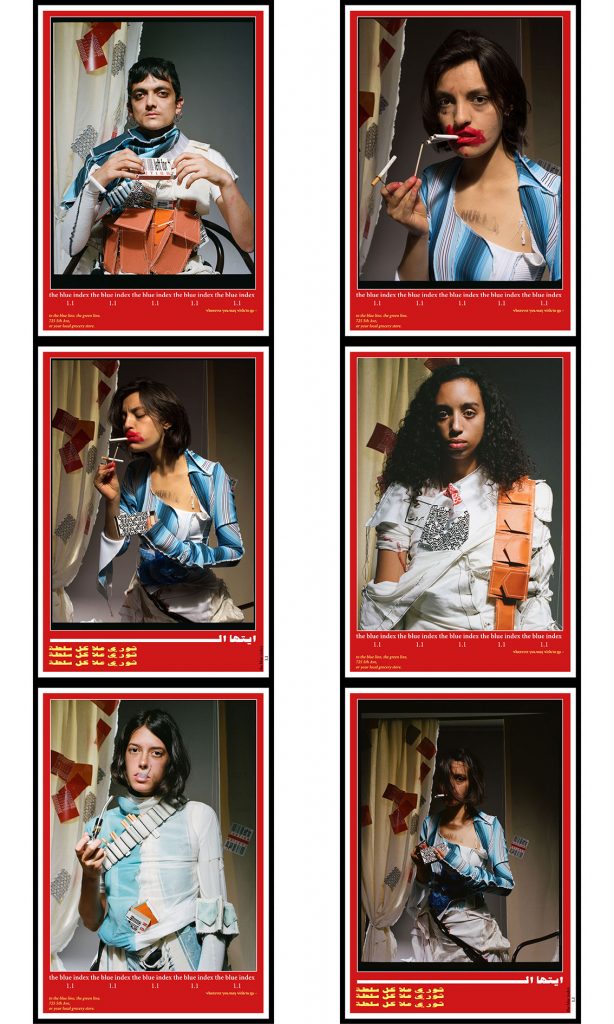 Akiki’s underground movement doesn’t stop at garments, there are badges, stamps, posters, matchboxes, a website and more. She has created her own propaganda machine inspired both by her thoughts on life in Lebanon but also by the fashion system. Slogans include “no to perception management” and “no to the oversimplified jpeg”. Recruits may start with a poster but end up fully-kitted out in Blue Index 1.1 where the military and mundane combine to create an invisible army without nationality.

Politics isn’t the only subject to inspire a creative yet caustic treatment by this year’s graduating students. Disciplines themselves are ripe for the picking. Alexandria Bailey, BA Fashion Communication: Fashion Journalism, launches the first issue of Yanker, a graphic novel that takes aim at the fashion world. At a metre tall, the publication not only satirises the absurdity of its subject but is entirely absurd itself. It tells the story of Diana Cholmondley, a fashion editor composite made with a large dose of Diana Vreeland and a little of Bailey herself.

“It began with my experience of being a total misfit, both in fashion and in London… The idea of being a tastemaker is an obsession in fashion and there’s a distinct lack of representation so Yanker is about that whiteness, that sterility and conformity. I want it to be overwhelming and a punch in the face.” 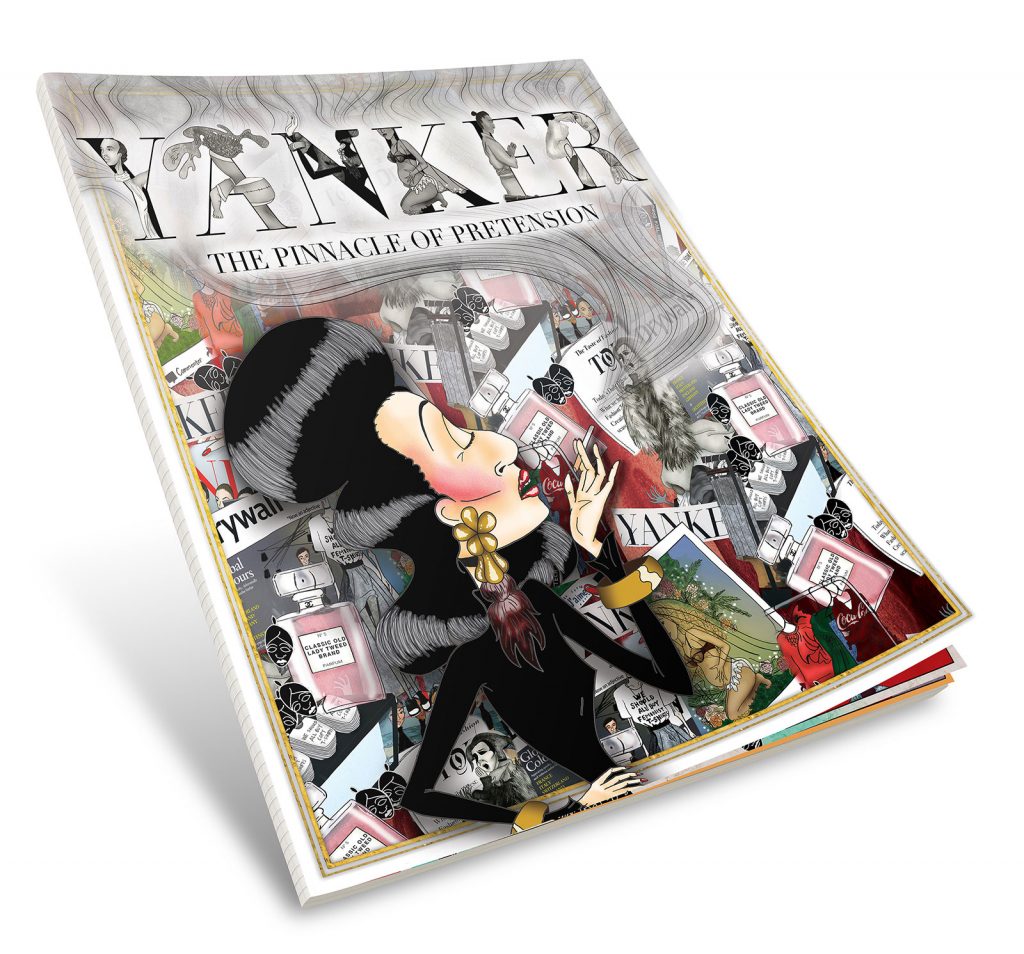 Each gigantic page brings both humour and offence, from the spearing of fashion’s ruling elite (enter photographer “Annie Liebotitz” and “editor of Bland Alexandra Sandman”) to editorial shoots of bone-crushing cultural insensitivity, including “Migrant Chic” in the Calais camps, and Cholmondley’s accidental killing of the last living female white beluga whale. While Yanker may offer the “punch in the face”, it’s dense with reference to fashion’s biggest moments and characters, making it not only a puncturing, but also a celebration, of its subject.

Show Two: Design is open to the public 21-25 June at Central Saint Martins. Emma King is nominated for the MullenLowe NOVA Award.