In this series we connect the dots on work in Degree Show Two. Here, we look at projects with a little material magic…

When looking at material innovation in Show Two, it makes sense to begin with MA Material Futures, after all it’s in the title.

Working in the intersection between technology and craft, many of the Material Futures projects offer us a glimpse of the future of stuff and Pure Human, by Tina Gorjanc is perhaps one of the most unnerving projects on show. 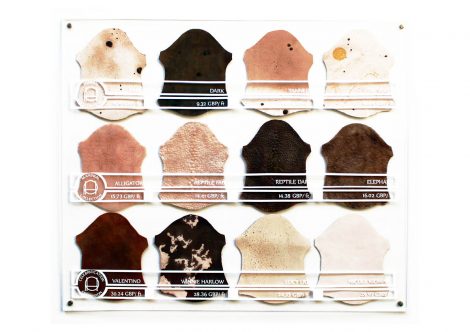 Looking at the advances and applications of biotechnology, Gorjanc presents a series of objects and documents to critique and provoke around advances in tissue engineering technology. 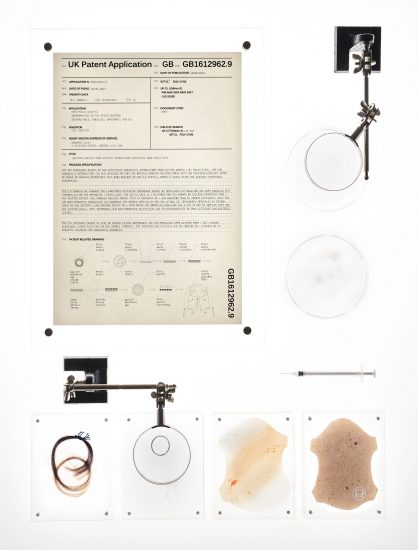 With the aid of a QC, the material explorer set about investigating the current legal (and moral) structures around biological information. Her aim is to highlight the legal gaps around the use of human material within research, an area currently attracting the attention of the luxury industry. Gorjanc’s project includes a collection of speculative leather goods – as if to confront us with the reductio absurdum (bags made from cultivated human skin) of the path which we are, unknowingly, already walking down. 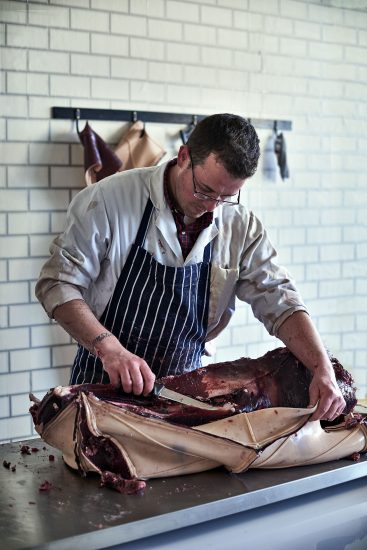 Also from MA Material Futures, Hanan Alkouh’s project look at first glance like a butcher’s shop, but in fact her table is laid with joints made from Sea-Meat Seaweed, a material made with dulce seaweed. The project, focused on a seaweed known to taste like bacon when fried, deals with sustainability asking,  as meat product becomes more unsustainable, can we retain the culture around meat eating while engaging with a replacement.

Alkouh’s main challenge was to transform the texture from plant-like to something more meat-like. With each experiment she got closer to a satisfactory replacement and soon realised that alongside the ecological sustainability of meat production sits a social sustainability: “Religion and ritual often revolve around meat; these celebrations and sacrifice are our natural behaviours as human beings. There’s a strong language and aesthetic around meat and that’s fabricated from our culture. We’ve build a dialogue around it and that’s what I want to celebrate.” This cultural connection led Alkouh to create her first “pig’s carcass” made from dulce, inviting a butcher to joint it, with the fruits of their labour on show in her ersatz butcher’s shop. 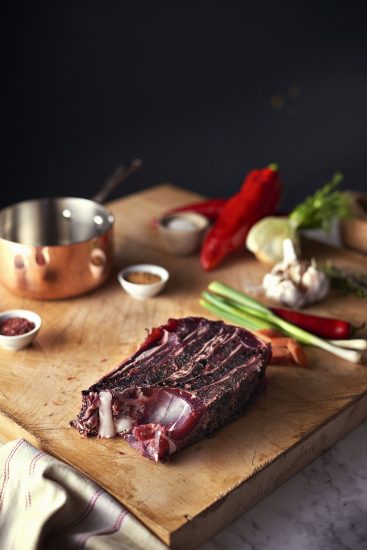 But material exploration isn’t confined to MA Material Futures. Giada Giachino, MA Design: Ceramics, Furniture & Jewellery, has been innovating in the traditional realm of the cameo. Looking at the Italian-based industry, Giachina was struck not only by the lack of cotemporary cameo design but also by the endangered skills of the cameo engraver and the unsustainable use of precious shells. Making connections with the shefffish waste in the food industry as well as discovering that a third of the shell is wasted through the traditional cameo process, Giachino began experimenting with a way to utilise this material waste. 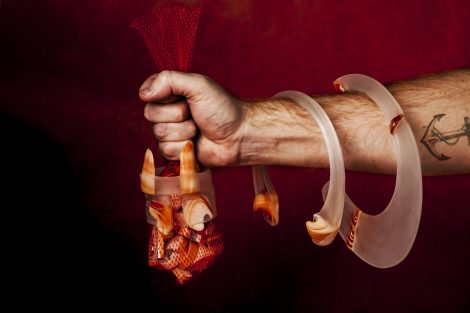 Her breakthrough came when she created a process that colours ground shell, which she could then suspend in resin resulting in a beautiful, and flexible final material.

Giachino has created a series of jewellery using lobster offcuts and resin to give people a glimpse into the possibilities: “There is a big conversation about the ethicality and sustainability of jewellery at this moment. Sometimes I think recycled silver or ethical diamonds is not enough. There’s a provocation in this collection because its saying that you can wear mussels – but the value is in the process. That’s the provocation. Cameo is a technique; the shell itself is worth almost nothing and yet the final outcome is valuable so there’s something in the middle, the process. Like diamonds, they are amazing stones but when you cut them you make them something else and you have the value.” Undoubtedly, Giachino is at the start of a long material journey, the next step being her summer residency at the University of Maine. Staying with an aquatic theme, but turning to a material with an almost-lost tradition, Joe Boon (BA Fashion) created a collection including garments made from fish skin. “Material creation has always been really important for me” says the designer who’s previously made giant sequins out of gelatin and dresses out of a moped.

In a reference to his relationship with his father, Boon was inspired by fly-fishing and set about learning the craft of this now-unconventional material. “Fish skin has been used for thousands of years, it’s died out because people have a preconception that it’s not a good material but salmon skin is ten times stronger than sheepskin,’ Boon explains. 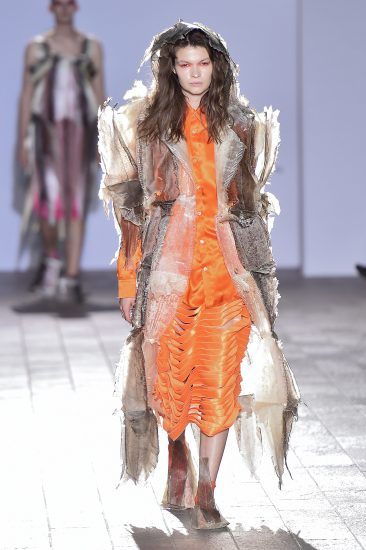 Spending his time in Billingsgate Fish Market, the designer collected the waste skins of salmon and Dover sole. At home he set up a production line of cleaning, de-scaling, curing in a solution of olive oil and egg yolk, then drying and cleaning again before being left with beautiful, translucent skins. With some garments needing as many as 38 skins, the collection was a labour of love. “I find repetitive processes really meditative,” says Boon, “I just lose myself in them. People were so interested that I had 10 or 15 people coming to help me. It’s such an ancient craft, so people wanted to learn about it and get it into their repertoire.”

Understanding a material – let alone inventing a new one – is a long process. While all these material explorers have projects to celebrate in Show Two, many are at the beginning, rather than the end, of learning what their materials can do. So watch this space.