With Degree Show season behind us, we reflect on our graduating student’s final projects and the inspirations behind them.

“Some know me as Ingūna Ziemele, many as Inga. I am originally from Riga, Latvia, however nowadays based in London but…you know…the Internet makes us all neighbours.”

At Degree Show Two: Design, BA Graphic Communication Design student Ingūna Ziemele installed a physical iteration of her fictional habitat Inga-Land. Presented as a room-like environment, Inga-Land is a place where Ziemele’s drawn characters are born and reside, where her imagination thrives, where dreams come true but doom is inevitable. Offering a tiny glimpse into Inga-Land, Ziemele’s installation showcased a collection of her illustrations and animations. Inspired by everyday human behaviour, they reveal the dark, inner workings of our cravings, secret desires and bad habits. 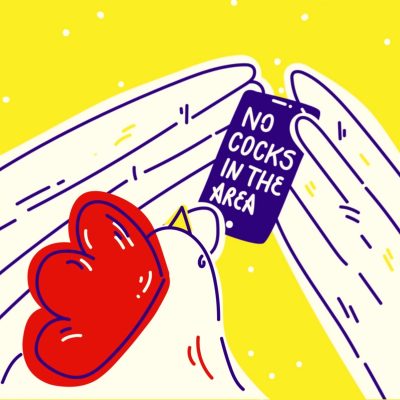 Chicks & Cocks is a series of comedy animations about modern-day dating habits. The short stories Ziemele has created are based around a single chick, caught in an endless loop of longing, in search of her perfect cock. Across the three episodes presented in Inga-Land, the chick turns to online dating, discovers her nearest match is thousands of miles away, enacts a satanic black magic ritual in her struggles to play “the dating game”, ultimately secures a date, but pushes her body to extreme beauty standards for her chosen cock. As an ongoing project which will evolve over time, Chicks & Cocks is a joyous but satirical look at the way online dating and dating apps have impacted our relationships and self-image. 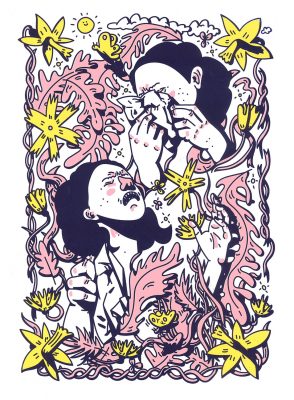 Ingūna Ziemele, A3 3-color screen print on the theme of Spring. 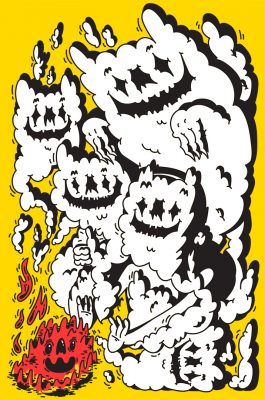 Although Ziemele is interested in the strange patterns of our actions, she is not concerned with designing for a greater good. This is explicity referenced in her publication of drawings I Will Not Save The World. Quietly rallying against a constrictive, socio-political cause, the main goal of her work is to facilitate a series of positive experiences, “to entertain and bring joy.” With a vibrant aesthetic and forms which are both economic in form and reminiscent of demonic, bulbous clouds, she has formulated a unique visual character. “You know that moment when you’re walking down the street and you are listening to some music and suddenly, what you think is the best tune ever comes up and you do a little dance move in the hope that nobody saw it – that is what I aim for my work to be like. If I would describe this feeling in a visual way, I would draw bubbles. They are probably the most exciting and unexpected physical shape there is. That’s why, to some degree my work aesthetically looks puffy.” 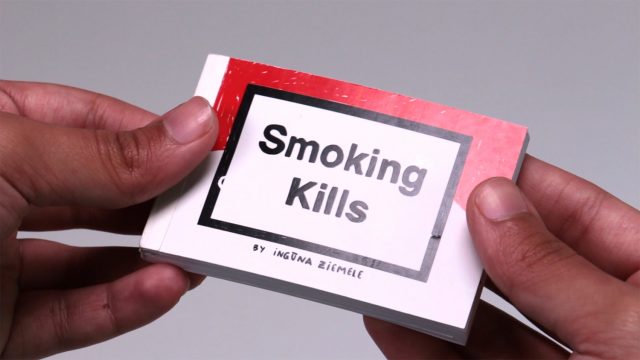 While Ziemele’s visual creations capitalise on our contemporary anxieties, the work itself remains devoid of neurosis. “Disturbing but in a friendly way,” her animations and illustrations reveal the familiar, absurd and paradoxical in our own actions: the obsessive nature of social media, the distanced network of online dating, beauty tricks which end in disaster. Smoking Kills, on view in Inga-Land, is a short flipbook animation about smoking: a young man lights a cigarette which spawns a smoke cloud, which then mutates into a large, “puffy” being, swallowing the man whole and disappearing into itself. Not necessarily critical in nature, Smoking Kills re-presents a well-known narrative, re-framing the threat that “smoking kills” in a direct, immediate way. In Ziemele’s 17-second film, smoking kills as well as simply existing as a killer.

Ziemele considers herself a visual storyteller – her practice is not defined by medium or format. The common thread in her work is its irreverent humour, designed to make us see the comedy in our own behaviour, as we repeat the dating games, the failed beauty tricks and damaging actions over and over again. Inga-Land at Show Two was just a glimpse into an endless realm of the joy and absurdity of daily human life.