Show One Theme: The Rest is History

With Show One: Art open, we connect the dots on some of the students’ work as they share it with the public for the first time

It’s easy to characterise a graduating art show as a moment for the new; a place for creative innovation, iconoclasm even. But in reality, the art practices of tomorrow are forged in relationship to those of the past.

Sometimes these connections are buried deep, other times they lie on the surface. One artist making the connection explicit is Aaron Ford, BA Fine Art, who’s created a series of figurative paintings, each one taking motifs and poses from famous works but finishing every figure with his own face. Having never done a self-portrait before, Ford outdoes himself with a total of fifteen. 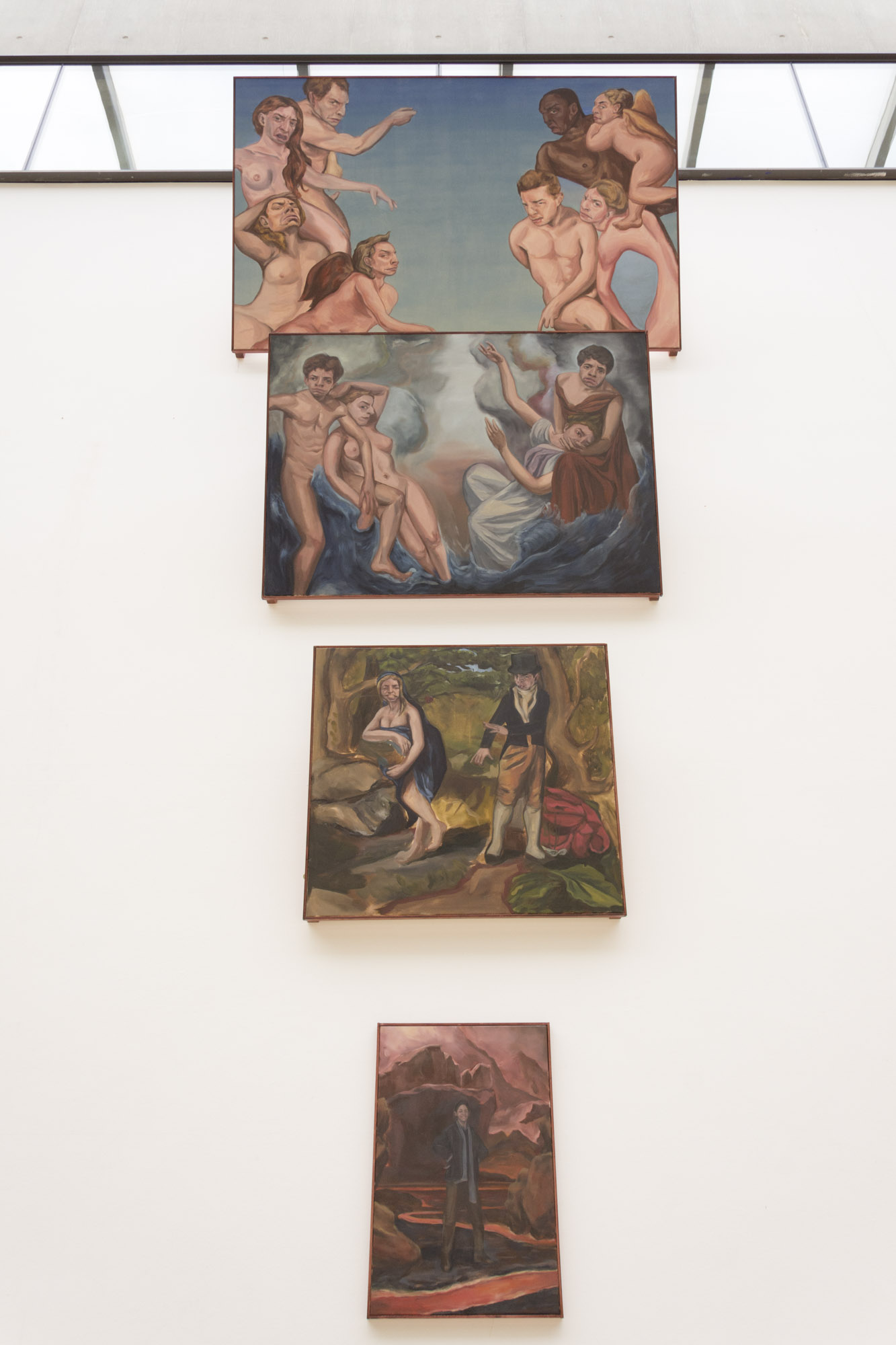 “It’s a snake eating its tail. I’m making work about my relationship to making my work. There are three players: myself, the work and the viewers. Those three things are always chasing each other and there’s a joke in there somewhere.”

Each composition is essentially a collage of figures and details from other paintings, from Boucher and Tiepolo to John Martin. His interest in historic work came to the fore during a year at the Warburg Institute embedded in art history research. Asking Ford what he gained during that time among the archives, he replies, “a general acceptance that I can dive deep into this area. You can become your own Warburgian German art historian.” Returning to his practice, he embraced not only an historically analytical approach but also the most canonical of disciplines: painting.

And so, through this almost-altarpiece of art history, is he reverential or mocking? “It can only be both,” he explains, “I could defer myself to history, put in the hours of research, but then not want to touch it because it’s its own sacred thing. You are burdened. Or you can go the other way which is to be ironic about everything. Everything is tongue-in-cheek. I think it’s important to straddle that line.”

Another BA Fine Art student remaking the history of painting is Hayley Jane Chapman. Combining painting with performance, Chapman takes motifs from the work of famous male artists and turns them inside out to present a feminist vision in front of which she performs humorous, barbed spoken word work as her alter ego Frogwoman. 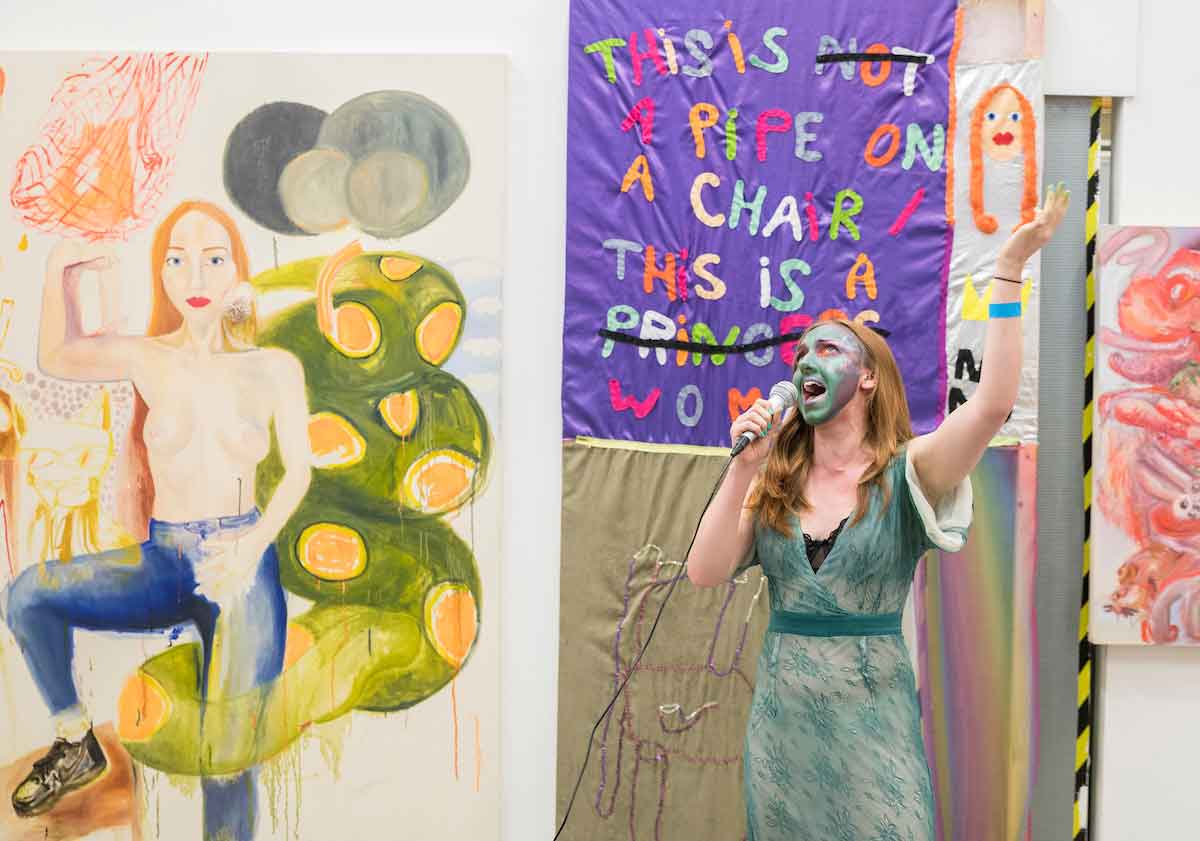 Though working resolutely from a feminist perspective, Chapman takes her aesthetic inspiration from artists who were all men. Her research uncovered the inherent tension in this stance: “It was such a strange struggle, going through the process of seeing behind the paintings, some of them are coming from sexist, misogynistic points of view. There was a very strong change; I can still appreciate the works for their context, but, from a modern day female position, art has moved on.” Chapman’s works undoubtedly make political statements but, at the same time, they are laced with humour. In one painting, appropriating a pose from John Currin, she stands topless and defiant, tensing her bicep with a gigantic serpent from the Garden of Eden. In another, she introduces the language of domestic craft, embroidering Van Gogh’s chair in sequins and Magritte’s Ceci N’est Pas Une Pipe with the phrase “This Is Not A Pipe This Is A Princess Woman”.

The past influences the present in quieter ways too. In MA Fine Art, James Tailor’s installation combines found objects, clothes, furniture, domestic items with paint like you’ve never seen before. He frees paint from its usual canvas turning it into material stretched and folded.

Having left paint in a Tupperware tub, he returned to find it had dried into a skin. “It was so interesting… Paint has always been in my work in some way. It’s always been the foundation.” 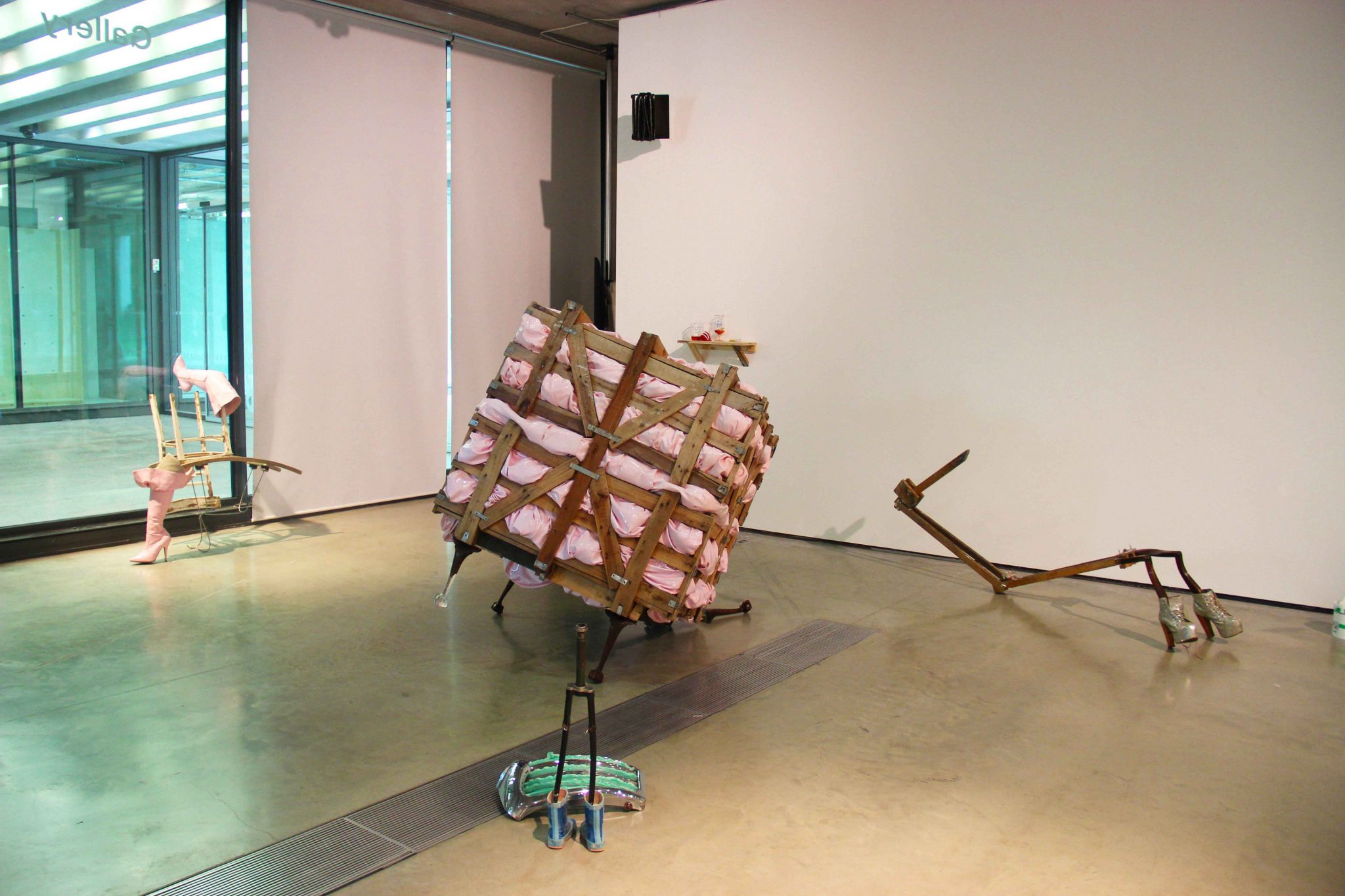 His work is a response to the death of his father. Though the relationship had been strained, in the final hours of his father’s life, the two had their first honest and open conversation. “Death can be grief and sorrow but for me it wasn’t like that,” he says, “it was the first time I got to connect with my dad. To hold his hand. It was the first time he held my hand. I never felt that was possible before.”

Though in 3-dimensions, Tailor’s work speaks heavily to the materials of paintings, namely wood and paint. He still thinks of his work as painting, composed in space rather than on canvas. And for this installation, Held My Hand, he references death scenes in classical works by the likes of Velazquez and eagle-eyed viewers may spot a black square mounted up high in the gallery’s corner as a nod to Malevich’s Black Square of 1915.

But Tailor wears his art historical references lightly, eager to create work that is accessible. In this vein, the viewer finds anthropomorphism here, an arrangement of legs and arms with emotion rooted in a tilt or a flick.

The meaning of material looms large in the work of Matteo Valerio, MA Fine Art. Spanning wooden frames with textile, Valerio works with the language of painting. Combining alpaca and cottons from his residency at Fondazione Zegna, Valerio used natural hand-dyeing methods as well as building the frames from wood scavenged from the London council estate in which he lives. 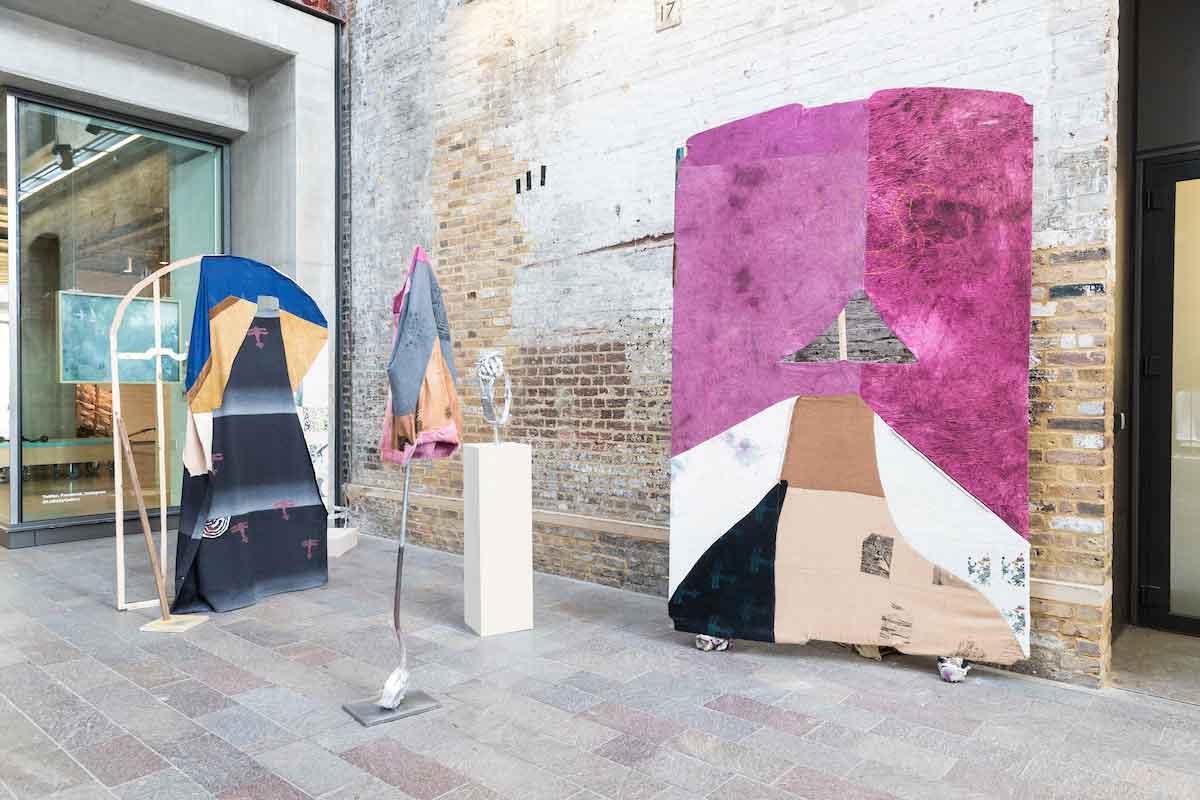 Whether personal or political, the work in Show One: Art offers not only a glimpse at the future, but also a nod to the past. Though the history of art may seem weighty, cumbersome even, the work on show only proves how contemporary artists meet it on their own terms.

James Tailor and Matteo Valerio are nominated for the 2017 NOVA Award. James Tailor is the recipient of this year’s Helen Scott Lidgett Studio Award.