Show One Theme: the Delights and Dangers of Digital 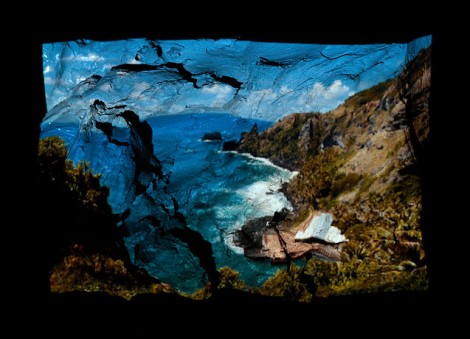 In this series we connect the dots on work in Degree Show One. Here, we look at artists exploring the impact of digital technology…

A machine that offers you a sweet while stealing your image, a study of the bacteria found in Ovid’s Metamorphoses and the story of one of the world’s most isolated islands might seem like they have little in common. Apart from all being works in Degree Show One, they share something deeper, each one exploring the possibilities and implications of digital technology.

Emanuel Tomozei’s Technoclampsia (BA Fine Art) combines virtual reality technology with performance art, inviting viewers to enter a world the artist has created. “I was doing performances and trying out film but I wasn’t happy with them. I didn’t enjoy using my body as the medium,” he explains, “then I found VR and I thought ‘this is the perfect thing’. This year I really wanted to apply it to a performance and see how it would work… I think there’s huge potential for this technology in the live arts.” 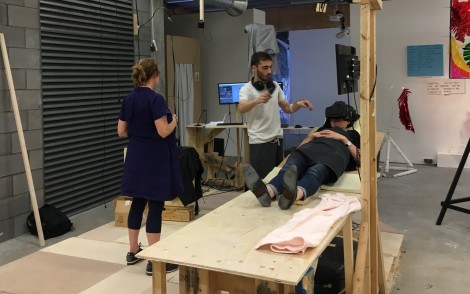 Technoclampsia brings together two participants, beginning in a 3D scan of the exhibition space it transitions into a virtual location in which users take on roles within a narrative. Though the work is inspired by Kafka’s On a Penal Colony, viewers aren’t simply enacting the artist’s directions; they have agency to explore the world themselves. Part of the challenge for Tomozei has been, he explains, “figuring how you can tell a story when people can do whatever they want”.

The idea of agency within the digital world is something Neale Willis (MA Photography) also explores. His interactive piece invites visitors to play a game to win a sweet. Throughout the duration of the game, enough data is gathered for facial recognition, with the subject effectively surrendering their personal information. “I’m asking questions about what is considered private, hidden or erased,” says Willis, “Personal data is the new battleground.” 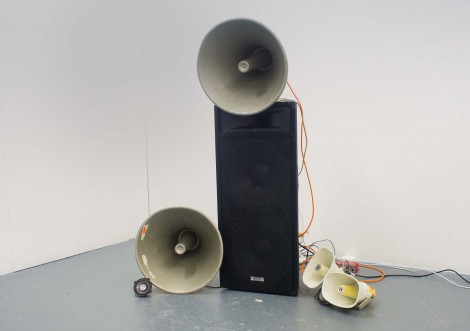 Willis brings the dark arts of data collection to the fore with both of his installations. The other being a soundscape from the 16-digit codes left behind when a tweet is deleted, music made from digital debris. “Digital stuff doesn’t have to be what it is,” says Willis, “When you take a photograph with a digital camera it isn’t capturing light, it’s just ones and zeros. And those could be anything. It’s only an image because we tell it to be an image.”

The connection between the physical and the digital has been explored by several of this year’s graduating artists, from Jean-Baptiste Lagadec’s painting tools inspired by Photoshop to Jessica Young’s hanging sculptures (both BA Fine Art). For Naomi Ellis (BA Fine Art) the connection between the digital and physical is a question of geopolitics and social inequality. Ellis was intrigued to discover Tristan de Cunha, the world’s most remote island that has no airstrip but is connected to the world via the Internet. The island enjoys an unreliable Internet connection now, but previously each inhabitant had an allowance of 100 words a month to send, in Morse Code, to the world. “People assume everyone is connected but that’s not the case, there’s a politics to the system” says Ellis.

The artist set about befriending inhabitants – as well as introducing another isolated island, Pitcairn, to her story – inviting them to share their stories and images. The resulting work includes film, text and sculpture, all exploring a sense of place, overlaying something digital onto something physical. So, a photograph of Pitcairn island is projected onto clay and plaster which the artist moves with her hands, distorting it. Elsewhere images of coral reefs have been transferred onto vacuum-formed plastic forms reminiscent of miniature landscapes.

While Ellis plays with macro and micro scales, Sarah Craske (MA Art and Science) focuses solely on the micro, detailing the bacteria found in an 18th century copy of Ovid’s Metamorphoses. With libraries digitising their manuscripts and books enabling global audience to access them, Craske wondered what would the impact be on the physical artefact. As objects, do they have other systems of knowledge to offer rather than just the text on the pages?

Surprisingly, she found a 1735 publication of Ovid’s Metamorphoses for sale in a junk shop for £2. Collaborating with microbiologist Dr Simon Park, Craske began mapping the bacterial landscape of the pages. “We could start to see how people were using with the text,” she says, “that people engaged with the Latin more than the English language section because the specific bacteria for touching is on the Latin part.” Her final work includes the cultures of the bacteria as well as magnified ‘maps’ detailing the arrangement of bacteria across the pages of the book (the images are constructed digitally, offering a satisfying circularity to the project). 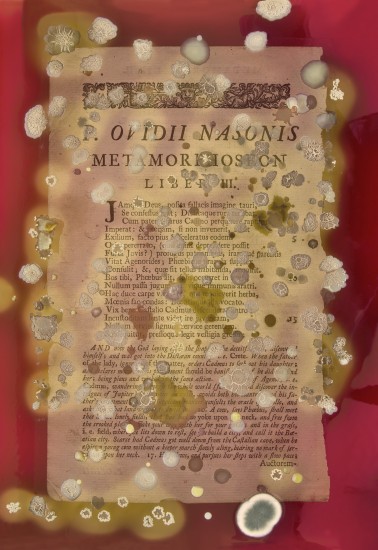 From the world’s most isolated island to a virtual reality world, all this work – though differing wildly in both content and form – engages with the impact and opportunity of digital technology. In some we see future possibility and ambition while others offer caution and a moment’s pause, but each is a view on the relationship between man and machine.