Show One Theme: Ready to Assemble

With Show One: Art just finished, we connect the dots on a few students who presented their work to the public for the first time.

Each year, Show One: Art fills the building with the graduating artists’ ideas made manifest. Whether in dance or digital code, performance or paint, the world that had previously been imagined is brought into being. This year, several students have created rooms, platforms and structures, from the slightest demarcations of gallery space to the tallest of towers.

One of the largest structures, Towards Fragments, built by BA Fine Art’s Bence Magyarlaki and Divine Southgate Smith, is in fact an instrument. Working in collaboration since the start of their final year, the duo wanted to create work that offers a different kind of experience, not of passive spectatorship but real engagement. Beginning with film, they removed the image and frame to destroy the sense of a particular viewpoint and were left with sound. 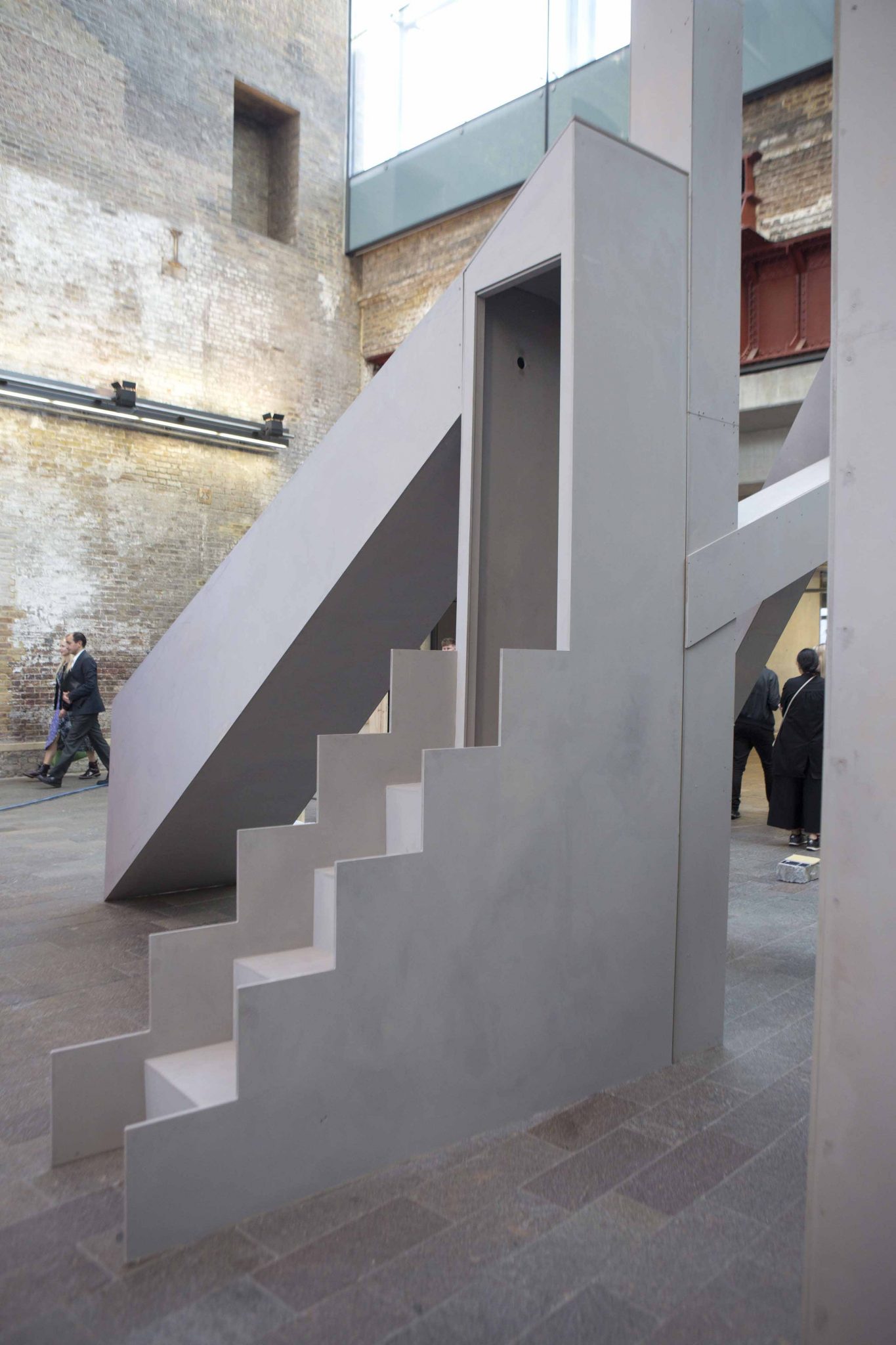 The voice is their subject, and yet somehow through harnessing this intangible thing the two have created one of the largest structures in Show One. Built in wood and painted grey, the seven-metre structure looks, at a blink, rather Brutalist but look again and its legs and arms are elegantly tapered reminiscent of the trumpet of a gramophone. “The structure is empty and non-functional unless you step inside,” says Magyarlaki, “It calls to some kind of interaction. We tried to make the shapes as suggestive of the act of speech as possible. They’re actually quite loud and brutal but what happens inside is subtle, whispered and deconstructed.”

Magyarlaki acts as mediator, drawing the visitor in and through the structure to hear and speak. Monumental yet intimate, Towards Fragments is only activated through the visitor’s engagement. It is this bundle of contradictions that Magyarlaki and Southgate Smith both enjoy: “It’s not theatre, it’s not performance, it’s not sound installation and it’s not architecture, but it’s somewhere in between these.” Interested in the grey areas between practices, the two are part of collective ()Parentheses which includes other graduating students from the college. 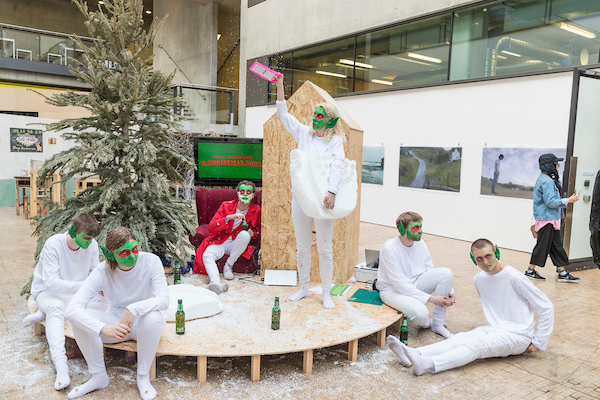 Other structures in Show One are more familiar, acting as a stage for the artist. A circular platform made from OSB holds a dead Christmas tree, a sunken upholstered chair and a shed. Here BA Fine Art’s Aidan Strudwick performs, as AIDAN STRUDWICK, in a musical version of A Christmas Carol. In maybe the most unglamorous of Christmas sets, Strudwick’s vision is complete with deadpan elves who grate polystyrene into makeshift snow. At its root, their practice is about showmanship: “I work with failure quite a lot. My persona is a bad clown really. It’s someone craving attention but having no skills at all. It’s about not having good work, but shouting so you’ll be heard. Perhaps, sometimes, that’s enough?” Strudwick’s performance is humorous and pathetic (echoed in his stage fit-out) but it’s also confrontational. Their work relies on a dialogue between the themselves and the audience. When not performing their version of A Christmas Carol, Strudwick’s stage becomes Santa Grotto engaging visitors in conversation, and subjecting them to both a sit-down on Santa’s knee and a never-ending supply of grated polystyrene.

BA Fine Art duo Eleanor Strong and Lucie McLaughlin have also created a space for performance, albeit of a very different type. The two started making music in their spare time, but soon realised that this collaboration could, and should, be brought into their artistic practice. Along with Strong’s sculptures and McLaughlin’s books, the two brought chairs, a keyboard and microphones to the gallery from the bedroom-studio in which they’ve been working. Within the gallery, a room is created, demarcated by rugs and sheer curtains (that open and close throughout the day), with McLaughlin and Strong in situ for their band performances but also informal creative collaboration throughout Show One. Interestingly, this is less about a performance, and more about sharing something that previously happened behind closed doors: “We are in the open. We’re showing people what our collaborative space looks like. We’re bringing our private space into a public gallery,” says McLaughlin. Where Strudwick relies on the raised stage to demarcate his work as a theatrical performance, an artifice, McLaughlin and Strong keep their space intentionally permeable enforcing engagement. 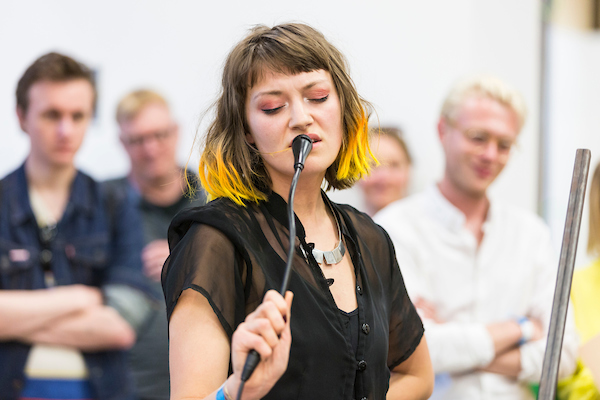 McLaughlin aren’t the only students creating living/working space within Show One. Sam Shaw, BA Fine Art, has built one of the largest structures incorporating a sitting room and crowned by a tent at its heights. This is the most elaborate in a series of works by Shaw which asked viewers to enter into a philosophical dialogue with him.

With blue tarpaulin creating the walls, Shaw’s structure has a distinct ad hoc nature which offers a metaphor. “It’s about expanding and contracting, and being ok with that,” he says, “everything changes, so you need to let it go”. As a work-in-progress, the structure stands for Shaw’s philosophical proposal celebrating our individual potential, our duty to improve ourselves.

Across all these habitats and platforms, what is crucial is that they are frames for the work itself. The construction defines and facilitates, letting the visitor know they’re stepping into a new space. But whether performance or conversation or simply soundscape, meaning is found in the intangible and fleeting moment rather than the structure that holds it.

Degree Show One: Art showed to the public at Central Saint Martins from 24-28 May, catch up here. Degree Show Two: Design will take place from 20-24 June.