With Degree Show season well under way, we take a closer look at our students’ final projects and the inspirations behind them. Two years after receiving a sealed, unaddressed envelope entitled ‘A Brief History of Ted Green’, BA Fine Art student Matthew Wang presents a living archive, documenting his own journey to discover the semi-real, semi-fictitious character of Ted Green. Wang’s evolving installation has been shortlisted for the MullenLowe NOVA Awards 2018.

For the two years Wang has possessed this envelope, it has remained sealed, its contents unknown to him. The elusive Ted Green was a 2016 Central Saint Martins student and the eponymous artefact supposedly contains his graduation show work – an unverifiable fact concealed in a brown manila envelope. In 2016, Wang tasked a friend to purchase the cheapest, most portable work in the Degree Show. The selected work was delivered to the College, protected by the boundaries of an envelope. It has not been opened since it was first sealed; Wang remains unaware of the results of his own purchase. 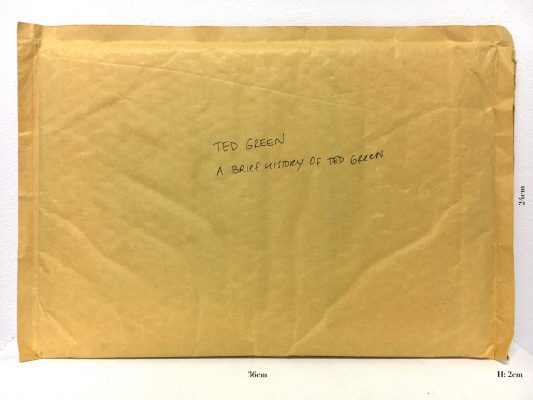 In place of the simple act of opening the envelope, Wang has accumulated a living archive – a series of documents and materials detailing the possibility of Ted Green’s character and location and the multiplicity of these variables across all Ted Greens, across the globe. Wang’s project is both a mythical, fragmented reconstruction of a living person and a documentation of his own journey to find something: “it is not truth, not complete and not static.” While Ted Green is a living person – one from a recent past who feasibly could be easily located – finding or representing him was just one strand among many in Wang’s project. In his own absence, Ted Green became symbolic of the unattainable: “One might say that Ted Green could be all objects, all ideas, all desires.”

Wang’s installation is comprised of a circular table arrangement with videos, photographs, documents, objects and a host of sealed envelopes which the viewer is invited to take away. Over the course of the project, he has contacted nearly 200 Ted Greens across the world. Although an ostensible attempt to represent a singular person, Wang’s self-directed journey instead creates a network of possibilities. It demonstrates the generative potential of objects, as conversations, experiences and confrontations are borne out of a simple envelope. On the iterations Wang has created for his audience to take away, the words ‘Becoming Ted Green’ are written in biro across the front. Fully sealed, it is up to the archive visitor whether they want to open it, or parallel Wang’s unseen, fictional relationship with an unknown character. Alongside his installation Wang presented a series of performances, in which he read aloud fragments from his journal. Certain objects and documents acted as triggers, allowing Wang to detail his own experiences during his search for Ted Green: “The journal entries reveal much of my thought process at each milestone and also raised some of the nuanced and idiosyncratic moments of the work – for instance, meeting my biological father for the first time on my way to Ted Green road.” While the objects Wang has bought together are connected through their place in his constructed archive, the performances also afford them an additional connection, as he details his own personal encounters:

I try to find places in London that would force me to run the parcel through an X-Ray. Maybe I will be able to get a preview of what is inside the envelope.

I go to city hall — at the entrance, two security guards check the bags of all who enter. I can see before reaching the scan that the results of each screening are visible on a monitor. Perfect.

I run my bag through the machine, I can see vague rectangles on the monitor. I cannot see anything in detail at all. It looks purple, blue, yellow. Mistake — I politely asked the guards to allow me to take a quick photograph of the monitor. The guards refuse immediately, they say it is against policy. No means No.

I try to wait for the guards to swap duties so that I may attempt again, this takes too long, and I have to return to other Ted Greens.

I immediately try to search for X-Ray services in London. I call them about my requests. I am repeatedly told I must get a doctor’s referral, or at least pen my intentions in writing, as the radiologists do not usually scan ‘objects’ but bodies. They seem open to the idea of scanning something unusual. 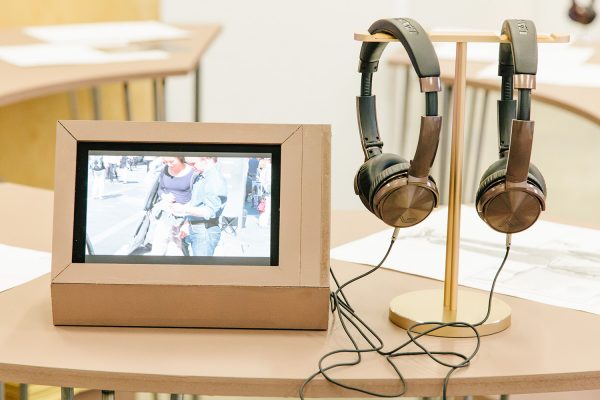 Wang defines his practice as a platform for exchange. Not medium-specific, the common thread in his projects resides in facilitating affective relationships – bringing people, objects or ideas together. He is particularly drawn to deconstructing power relationships, countering factors that might hinder or prevent exchange from taking place, such as borders, mediums of communication or regimes of knowledge. His previous projects include creating an outside, large-scale mural with a group of seniors from the AgeUK centre in Islington and working with children between the ages of 6–13 to produce two outdoor playground paintings, through chance and throwing games. Working with such a breadth of collaborators, Wang is very aware of the significance of his own role and is intent on fostering personal agency: “What is important in my work now is an underlying desire for empathy and coexistence.”