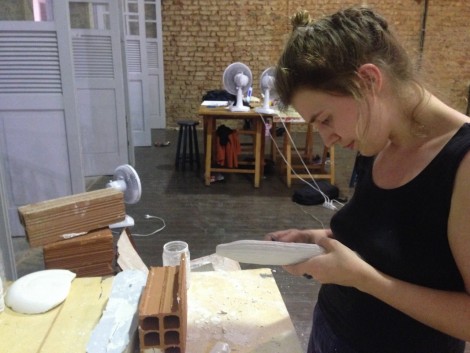 Following their recent trip to Rio de Janeiro in Brazil as part of the Despina residency programme at Largo das Artes, we spoke to CSM graduates Beatrice Vermeir, Sarah Crew, Helena de Pulford, and Carlotta Novella about their residency and the work they’ve been doing there.

In the final part of this series, we speak to Helena de Pulford, a visual artist, sculptor and writer who graduated in BA Fine Art. During the Despina residency, she investigated domestic rituals, gendered political activity and emerging feminist art practices in Brazil.

Please tell us a little bit about where you’ve been staying and working in Rio.

We’ve been staying in an area called Cosme Velho in Rio. It’s an area full of families so it is very safe and has a nice vibe to it. The accommodation was pretty idyllic-small chalet surrounded by trees and monkeys. The residency was hosted by a galley called Largo das Artes in the centre of Rio and was part of the Despina programme.

Can you tell us a little bit about what you’ve learned about emerging feminist art practices in Brazil during the residency?

My proposal for the residency shifted somewhat after we had arrived in Rio. Brazil is in a time of political and economic crises and at such moment, you really have to respond to what is going on rather than a preconceived idea you wanted to explore.

As a group we decided to focus on the residency as a chance to explore built strategies for collaboration and incorporating our experience of Brazil as it unfolded. For this built strategy we constructed a central tower that expanded during the residency according to the needs of our making and living habits. Once the built strategy started to develop, we were able to process some of what was going on around us regarding the crises through using the built structure as a kind of engine for thought and discussion.

During the residency we some amazing artists, curators and thinkers visiting us in the space that facilitated the development of our collaborative thinking and at this point, I was able to explore aspects of my original proposal to discuss emerging feminisms.

I had prolonged discussions with two artists – Caroline Valansi and Annita – who were able to give an idea of how emerging artists were thinking about feminism. They were amazing and the conversations were very inspiring. Many of the themes that young artists are exploring in Rio are quite similar to London; issues around self-representation and the use of social media for example. Although in Rio, the way the themes are articulated and the supporting theories are very different. Many of the practices have more explicit political content for example. 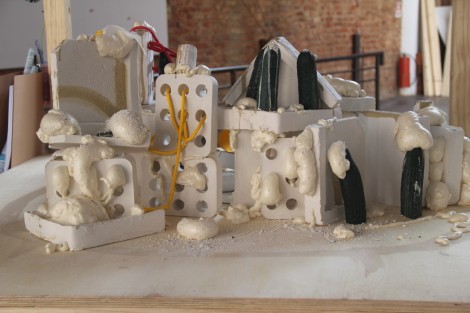 You held a performance workshop at Largo das Artes titled HOST, and a series of research seminars with students from Parque Lage on Emerging Feminisms. How did these play out? What did you learn from them?

I’m often too much of a wimp to do any performances or workshops at home, so the residency was a great opportunity to come out of myself. The performative workshop (‘HOST’) I ran at Largo das Artes went really well as a trial to see what could be done using performance as another platform to explore ideas.

The residency has moved me to some of the areas that are far less defined in my practice, especially with regards to context and collaboration. I think it’s going to take a while to process and put into effect in my work.

Carlotta and I had some intense moments of working together that opened out some areas of our work that were quite difficult to define in terms of discipline. At times, what we were doing didn’t really look or sound like art or architecture. The great thing about Rio is that there was far less of an emphasis on justifying your work in relation to a discipline – which seemed to allow far more movement in terms of collaboration. That being said, those who were working across discipline were far from lax when it came to the theoretical underpinning of their practice. We would meet chefs, for example, who were just as adept and well read in art theory as any other practitioners we know.