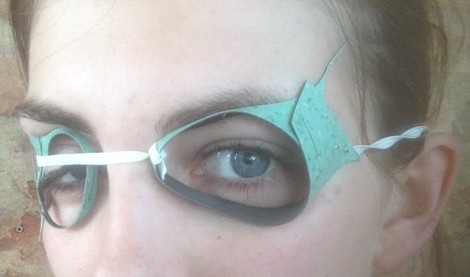 Following their recent trip to Rio de Janeiro in Brazil as part of the Despina residency programme at Largo das Artes, we spoke to CSM graduates Beatrice Vermeir, Sarah Crew, Helena De Pulford, and Carlotta Novella about their residency and the work they’ve been doing there.

First up in this four part series is Beatrice, who graduated in BA Fine Art. Her work is predominantly performative, and re-imagines alternative modes of social organisation, work and education.

Your research in Rio has involved performances, and creating a mobile and adaptive vehicle. Can you tell us a bit more about how these ideas have developed?

Prior to moving my practice to Rio, I undertook a research project on the work of Helio Oiticica and his Parangole series; capes made in collaboration with residents of Mangueira favela and used in collective dance experiences at a time, during the military Junta, when even gathering in public spaces would put you in danger of arrest. This research extended to include other deconstructed performative movements active in Rio in the 60s and 70s, such as the Living Theatre and the Theatre of the Opressed. These were platforms for the dynamisation of social oppressions and proposals of change. My interest was to mobilise this archive in the form of an adaptive vehicle that could easily be moved, on wheels and also be opening it out to wider engagement.

Upon arriving in Rio, this research began to realise itself in different ways in reaction to the collaborative inhabitation of the space of the residency studio; transforming into canopies that hung from the large collectively developed structure, being laminated and tailored into waterproofs for the extreme rains that soak the city during March (Aquas de Marco). The bodies of text I had collected became assimilated onto real bodies in the form of a “Gambiarra”-style clothes making atelier; their content embodied in this form of wearability, usability and adaptivity.

“Gambiarra” is a term that occupies a similar territory to Levi-Strauss’ ‘Bricolage’ or Jane Bennet’s ‘Thing Power’ which was a dominant thread in my research. It is a Brazilian slang term that denotes improvised solutions to problems using any available material. This philosophy and making strategy is one that was both in the realisation of the Atelier, and its output of costumes and clothes but also in the making of a collaborative studio environment which included mobile tables, terraces and a kitchen unit. 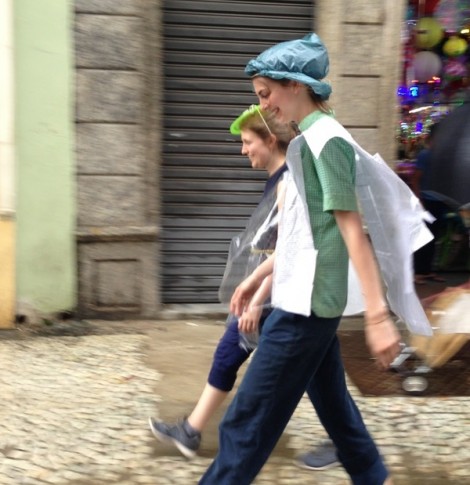 You’ve been looking into the socio-political context of Rio in the 70s. What can you tell us about that? How has Rio changed over the last 40 years?

The context of crisis; social, political and economic instability that led to the dictatorship in the 1960s in Brazil also bred a very strong counter-cultural movement amongst which themes such as collective body experiences, alternative ways of living together, sensory awakenings and much more were proposed by groups such as Neo-Concrete. In some ways, it could be said that history is repeating itself, with the socio-political situation now in Brazil tangibly on the edge of collapse. Activism and art remain firmly connected with most artworks being produced in this moment being highly political. Entering this space as an outsider was difficult, especially not wanting to overtly comment or patronise a situation we were unfamiliar with. The intention that we sought to embed in the construction of this micro-creative-economy of our studio was the proposal of an alternative live/work space in an unobtrusive way.

How has this residency benefitted your practice?

This residency in particular was a fantastic opportunity for us to interrogate the term ‘residence’ itself, at a critical time and in a place where notions of habitation are rapidly shifting and where self-organised living is prevalent in the context of the favelas. To pose ourself the questions: ‘What does it mean to inhabit a space? To reside there, to occupy it, to allow it to change and grow and, more often than not in these times, to share it?’. We began with what we thought we knew; distilling and presenting the needs of each individuals’ practice and constructed a central space to accommodate these as well as materials we had brought with us; books, texts, plaster, tools. However, as our practices cross-contaminated and absorbed a lot of theoretical and material influence from the streets below, it became more important to make a space in which unexpected things were possible: improvised performances; open workshops; hosted meals and conversations brimming with ideas followed through. Effectively it was a space constructed in order to allow for the possibility of it constructing us and our inhabitation of it. How have you found working in a cross-disciplinary way?

Even before we came to Rio, we identified a dynamic dialogue between our practices; common threads of mobile structures, inhabitation, femininity and much more, which facilitated and even catalysed the occupation of the space and material engagement at Largo das Artes. I really enjoyed seeing my practice contaminated by both material elements, such as Helena’s expanding foam, leftovers of which I used to make ‘pearl’ necklaces, or scraps of Carlotta’s chopping boards which were transformed into rings and bracelets, as well as the intense theoretical exchanges between our existing practices and those we were coming across together in this unfamiliar place such as Anthropofagia (cultural cannibalism).

What surprised you most about Rio?

What I continue to find surprising in Rio is the lack of cynicism of people in the face of a growing cultural crisis. There is a huge amount of time and energy devoted to discussion and protest as well as an openness, perhaps founded in such traditions of the Theatre of the Opressed, for cultural or ‘art’ spaces to be valid arenas for the discussion of alternatives. This is embedded in the project I am currently involved in; a theatrical workshop which works together the experiences of young residents of the Maré (a large favela on the fringes of Rio’s international airport) with Thomas Moore’s text Utopia.

Stay tuned to the CSM blog for our upcoming interviews with the other graduates. Tomorrow we talk to Sarah Crew.