Real Dirty Blue: A Century of Textile Design at CSM The Lethaby Gallery’s current exhibition, Real Dirty Blue, tells the story of a century of textile design at Central Saint Martins. Featuring the work of 26 designers who either studied or taught at the College, the exhibition showcases the processes behind the final pieces through sketchbooks, prototypes and samples. 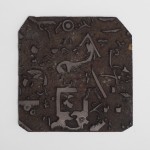 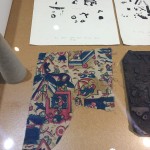 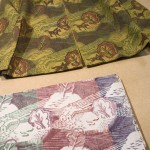 Joyce Clissold was a student at the Central School between 1924 and 1927 and went on to teach at the school from 1936 to 1940. Initially she began studying printmaking on paper but she quickly realised that what she was really interested in was using print techniques on fabric. Whilst still a student, Clissold worked at Footprints, a workshop founded at Durham Wharf, Hammersmith in 1925 by Elspeth Little (also a Central student), Gwen Pike and Celandine Kennington, which she later took over in 1929.

After the war smaller workshops like Footprints were quick on their feet to produce new designs. Using printing blocks made primarily from wood and lino, Clissold was able to swiftly test out new designs and experimented with more playful patterns and motifs, designs which Judy Willcocks suggests are mirrored in the bold textile design of the 1950s. Showcasing Clissold’s trial and error approach, Real Dirty Blue features splattered dye books and samples of her handcrafted textiles alongside design notes and printing blocks. The title of the exhibition was taken from the title of one of Clissold’s dye recipes, expressing this very real, hands on approach to textile design which is seen throughout the work in the show. 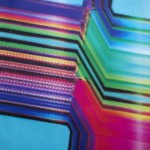 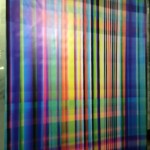 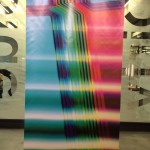 Malcolm Cocks was an early ambassador of digital technology, responsible for bringing the first Apple Mac computer to the College and establishing the first computer studio in the School of Fashion and Textile Design at CSM. His innovative work concentrated on the idea that designers should approach digital technology in a new way, rather than using it to complement traditional techniques. The unmissable swathes of material printed in his bold, Photoshop produced patterns hung from the ceiling in the exhibition celebrate Cocks’ dedication to technology and digital experimentation. 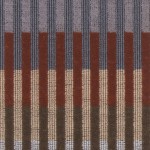 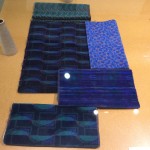 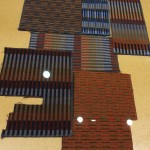 Eileen Ellis specialised in weaving whilst at the Central School and later went on to teach at the college. Her extensive and distinguished career began at Zika Asher’s design studio (1957 – 59) where she worked on printed and woven textiles. It was there that she began to develop woven designs for interiors and in 1973 Ellis went on to open Weaveplan. Weaveplan developed the seating fabrics and textile colour strategy for BAA’s UK airports, all the textile elements for British Airways and fabrics for many other well known and international transport companies. Exhibiting samples of Ellis’ instantly recognisable designs, the display also looks back through her weave notes and an insightful selection of her designs done on graph paper. 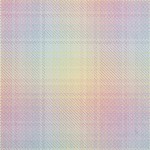 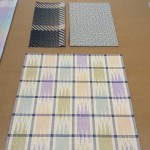 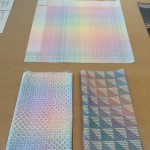 Having studied Textile Design at the Central School of Art and Design, Howard Asher began his career in fashion and went on to forge a career in the home furnishing industry. His hypnotic geometric designs are a fairly new addition to the Museum and Study Collection, but are a constant source of inspiration with students making new works based on his designs. Working primarily by hand directly onto millimeter square graph paper, Asher’s work demonstrates the absolute dedication and meticulous precision that went into every piece he created. If there was a single mistake, Asher would cut out tiny replacement patches to cover up where he had gone wrong – a technique that is rare to find in his work. In fact, it was Asher’s obsessive and intriguing design methods that inspired the curators to develop the process-led layout of the exhibition.

Real Dirty Blue is open in the Lethaby Gallery for all to explore until 23 March 2016.