Staff member Jo Wheeler recognised a rare 16th century map in our collection. He helped bring it to the attention of international experts, who hadn’t known it existed.

When Jo Wheeler, our Director of International Development, visited the Museum collection in his lunch hour last term, one object in particular caught his eye. It was a portolan chart – a type of navigation map – created by the Cretan map maker Giorgio Sideri, also known as Callapoda.

Despite being almost 450 years old, the map was in remarkably good condition. Records show it was bought for the College by its first Principal, William Richard Lethaby, from the renowned private collector Henry Yates Thompson. Although the map had been exhibited and was listed in the Museum’s online catalogue, Jo’s hunch was that the international community of map experts didn’t know it existed.

With Jo’s help the Museum started a conversation with curators and academics across the globe. It turned out he was right – nobody else knew about our map and there was great excitement at its ‘discovery’. Dated 1570, the map was made five years later than the last known work by Sideri, so close study could yield interesting information about his final years in chart making. 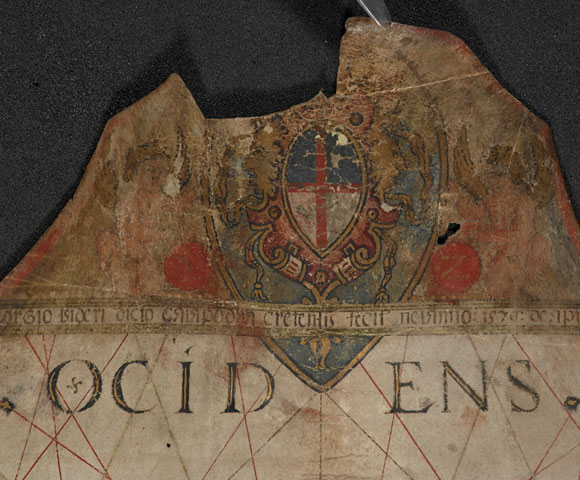 Close-up of the chart

We’re very lucky to have the British Library just around the corner and Peter Barber, their Head of Map Collections, was quick to offer his help. On a wet and windy day the map was wrapped up and taken over to the library to be captured by a state-of-the-art camera.

The resulting images are so detailed that the viewer can read each of the thousands of place names lining the chart’s coastlines. These high resolution photos have been shared with map experts in Edinburgh, Athens, London and Genoa, and will be added to a census of portolan charts.

The Museum and Study collection at Central Saint Martins is a treasure trove of objects collected over more than a hundred years. A combination of Jo’s expert eye, the generosity of the British Library, and developments in digital technology has enabled one of these wonderful pieces to re-enter the international arena.