What can you say in print over, under and between the official lines?

From April–September 2018, Central Saint Martins MA Fine Art students took part in OVERPR!NT, AG!TATE, ACT!VATE at Centre de la Gravure. An exhibition in three parts, OVERPR!NT stemmed from years of collaboration between European art schools which are all part of the Printmaking Union. Throughout history, the very materiality of print has played a central role in proclaiming and protesting, agitating and activating. Framing print as a vehicle for rebellion and resistance, OVERPR!NT examined editions as seditions and prints as means of counter-information – from pamphlets to samizdats and posters to clandestine press.

As part of the programme, students and alumni of the Printmaking Union conceived artworks, publications and performances that directly addressed the public and surrounding city of La Louvière. In September 2018 Emma Starkey and Robin Woodward took performances Hail Thy Chicken and Repentance to the streets of La Louvière. Through a performed ceremony and series of public gestures, the artists aimed to challenge monotheism and perceived religious constructs. Here Emma and Robin discuss their collaboration and OVERPR!NT performances.

Can you tell us about your performances during Overprint?

Emma Starkey: Robin Woodward and I performed a series of interventions around the city as characters we devised called Judith Porter and George Phillips – who are both members of a church. We handed out bananas to passers-by, which had custom-made stickers on them, detailing the location and date for our “church service” titled Repentance. While we gave these out, we also read out interpreted sections of the bible and squeezed a rubber chicken. These actions varied according to our collaborators: the public.

Robin Woodward: Judith and George performed three, interactive sermons. We consider members of the public as responsive artists and so collaborated with our audience throughout the piece. I really wanted to focus on the aspect of ‘agitate’  in the title of OVERPR!NT, AG!TATE, ACT!VATE. Through agitating the public we were able to activate the environment – to and gain real responses that weren’t premeditated within our performative actions. 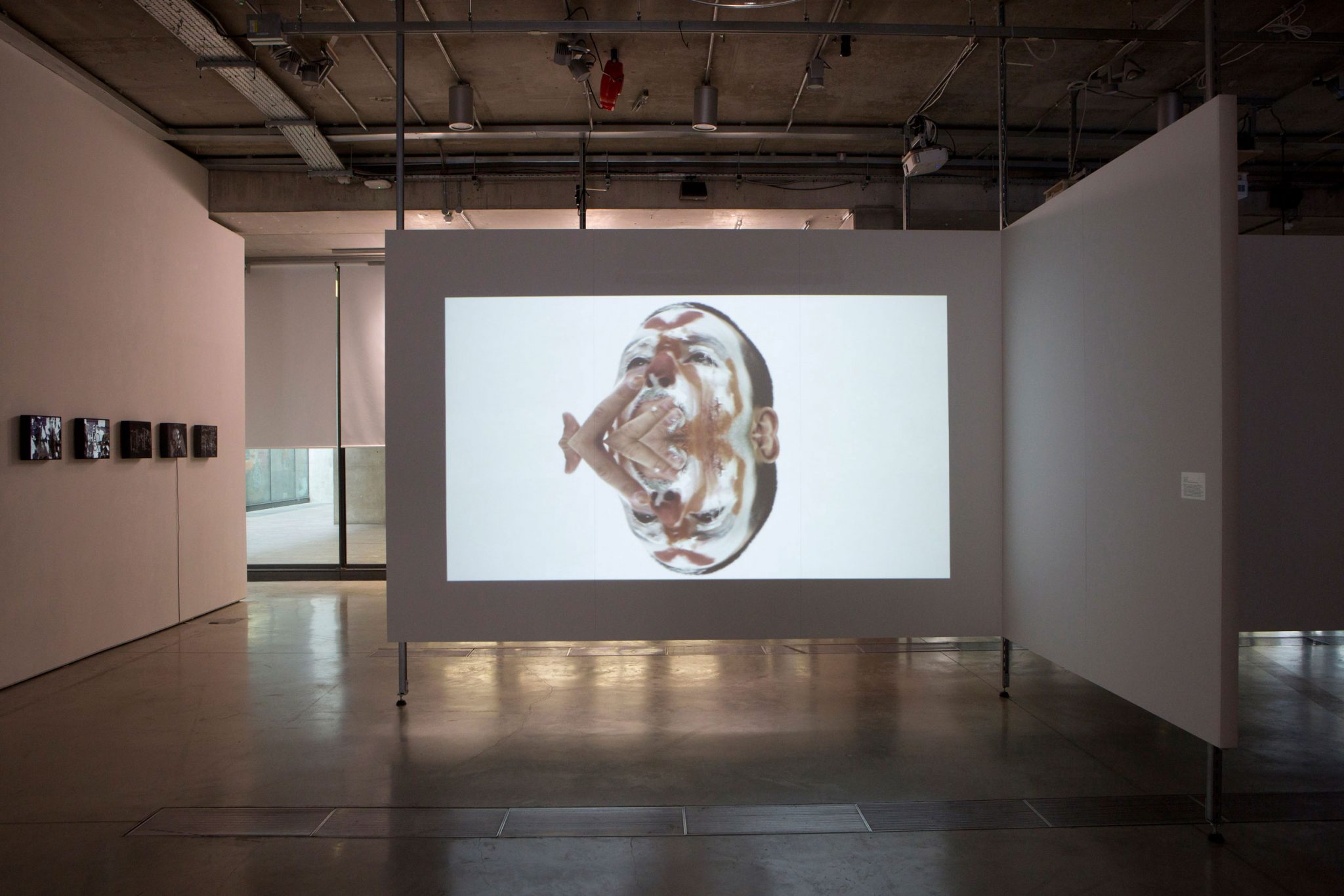 After Contempt by Emma Starkey

Can you tell us about your collaboration? How did you decide to work together?

ES: Robin and I have similar ideas when it comes to performance art. We don’t rehearse as we believe the work becomes too contrived. Instead, we allow the work to evolve. This is also exciting for the viewers as we are experiencing the unfamiliar and unknown at the same time; we are in the same position. Robin and I both use live art as a form of art-making. Both of us look at performance art as doing and living rather than acting.

RW: When I was asked by Emma to take part in OVERPR!NT I was very excited, she has great energy and passion which is always uplifting. We had worked together before on Emma’s Degree Show piece and the video works After Contempt and Where the Image Slips, so we had already formulated a narrative which runs through both our individual and collaborative work.

Can you tell us why you use performance as your medium?

RW: All art is performative, some action has taken place, even with readymade work. As a male artist my main focus is to unravel hegemonic masculinity. The body is vulnerable and so through performative, bodily actions, the image of the white male as strong and dominant fails.  My work attempts to undermine the cultural construction of masculinity and whiteness by revealing its unattainability.

ES: Performance art has immediacy and urgency – just like printmaking. As an artist I use my position as a female to undermine and challenge gendered conventions as well as monotheist religion. I often challenge Christianity, especially the story of Eve as she is deemed to be the embodiment of sin. In the OVERPR!NT performance, Judith is a priest who wears red lipstick, her curly hair is worn down and she argues that there is no need to pray to Him. Instead, she views the sun as God. Christianity, and many male artists, have personified God as male – “Son”, “Him”. I chose to use performance art and the pre-existing world as a canvas; there’s enough fiction already at play. 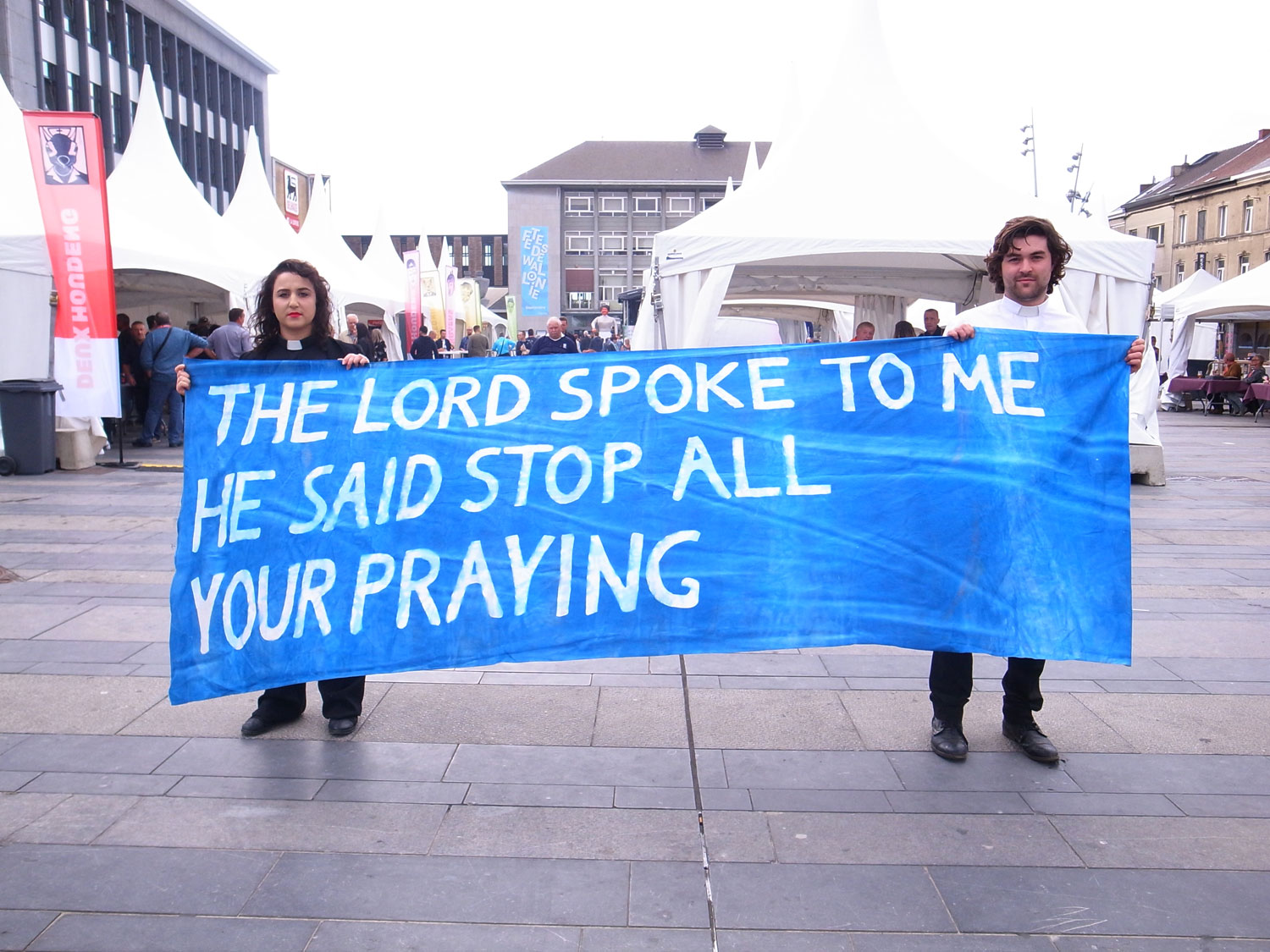 How do you explore the notion of printmaking through your performances?

ES and RW: We collaborated with James Sirrell, an artist who makes cyanotype prints – a mark-making process which relies on sunlight or UV light. In our work, the sun was the light source that fixed the words. This was important to us, as a way of challenging a gendered God.

We carried a banner during our Hail Thy Chicken interventions, which also played the role of backdrop in our performance sermons Repentance. It read “The Lord Spoke To Me He Said Stop All Your Praying” The message can be interpreted in various ways – on one hand that it is futile to pray to a God that has surrendered his own higher position, and on the other that if we recognise this then it could destroy the notion of hierarchy, or a gendered God. We would recognise ourselves as god. (All human beings as god) and therefore equal.

We were influenced by the political stance of the 1970s collective and punk rock band CRASS. Their poster ‘There is no authority but yourself’, challenges the very foundations in which we live. Their messages are direct but anti-propaganda, offering an alternative mode of thinking and challenging pre-existing thought.

There’s a spirit and ethos in printmaking that we believe has enriched our practice. The world’s obsessed with meaning, so it is liberating to make quick and unapologetic work. This process offers complexities that over-worked and exhausted ideas can’t. It’s a great way of developing ideas organically.

What were the key themes? How did you express these?
RW and ES: We expressed themes through squeezing a chicken that released its own noise, it was a main attribute in our work as a vessel that expressed our religious views.

What did you take away from this experience?

ES and RW: We were aware that La Louvière is a Catholic town and we were concerned that we’d offend people, although it wasn’t our intention. We quickly learned that this was our own preconception. When our banner was read out loud, people laughed and saw the humour within the work. We took pictures together and people were happy about free bananas and puzzled by the absurdity of squeezing a weird looking anthropomorphic dog toy.

The banana giving was a peaceful act. We offered bananas to everyone. A police man moved through the market in his car and pulled up to see what we we’re doing; we offered him a banana and it brought a smile to his face. We’ve learned that we project onto other people too much and that certain ideas are produced solely through fear. 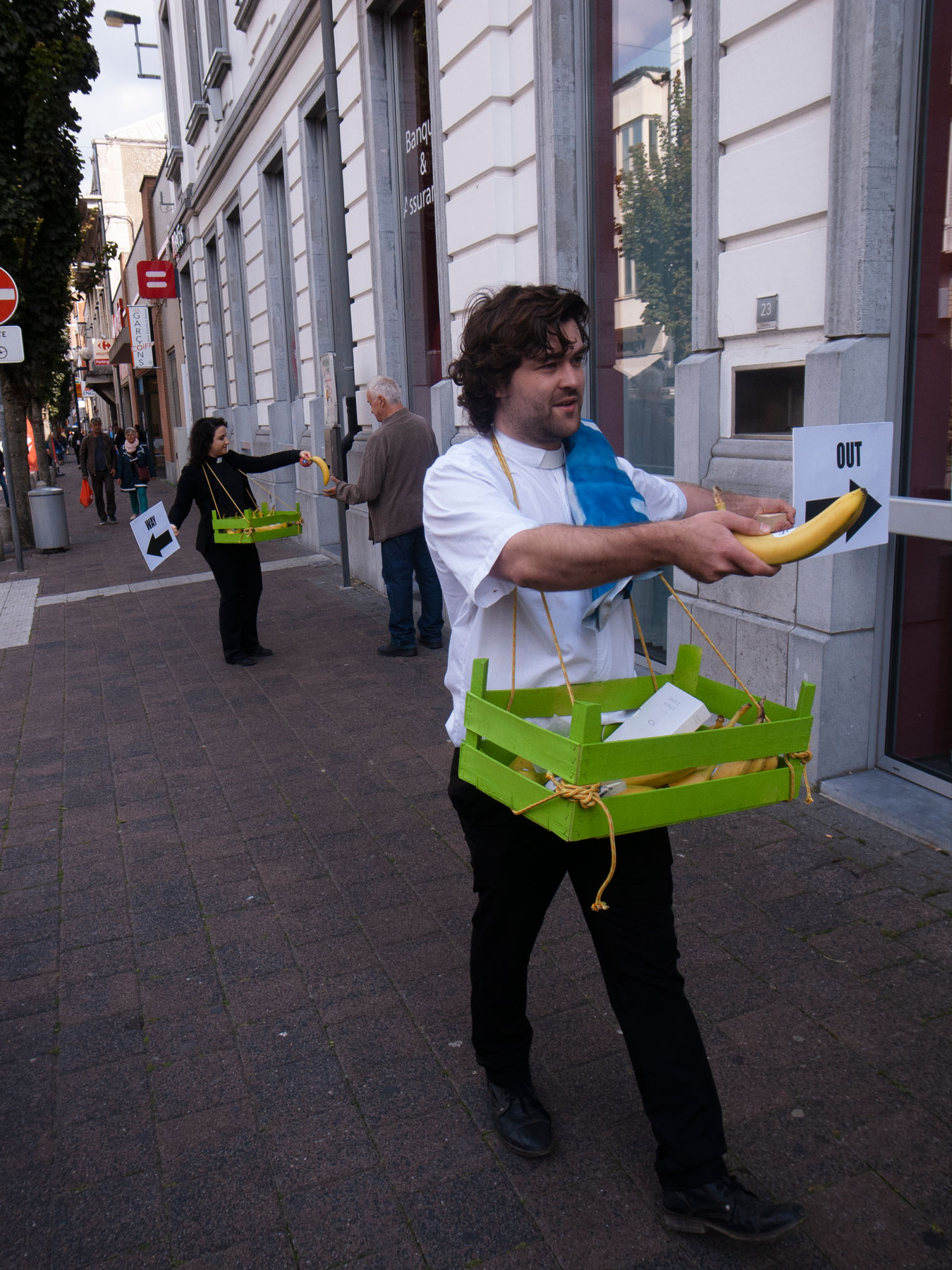 What was the reaction to performance?

ES and RW: We had a mixture of responses, some people saw the acts as absurd and were puzzled. Judith Porter and George Phillips responded with random passages of the bible and claimed the banana was the fruit of Repentance while squeezing a chicken dog toy and the sound of the chicken would create laughter. There were moments where a young child would cry during the sermons, we would offer them the chicken. The police would check us out so we offered a banana. Some languages are universal and humour is definitely one of them. We were also surprised by our own actions, in one instance Judith held the banana and carried it in front of her as it contained holy energy which people were drawn to.

ES: After four days Judith and George were known as ‘the banane people.’ I liked that as it removed the pretence created by wearing a clergy shirt. During the sermon Repentance, Judith started singing ‘One More Chance’ by Bloc Party very loudly through the gallery. The viewers said this was exciting, unexpected and created a sense of belonging.

RW: We see agitation as valid as happiness or any other emotion.  We gave a few posters to shops, galleries and bars, a bartender laughed when he read “Salue Ton Poulet.” We caused the odd agitation, but generally we had a very positive experience with the public. There was also a parade on the same weekend we were there so there was great energy. We had to fill our banana baskets often; people love bananas. 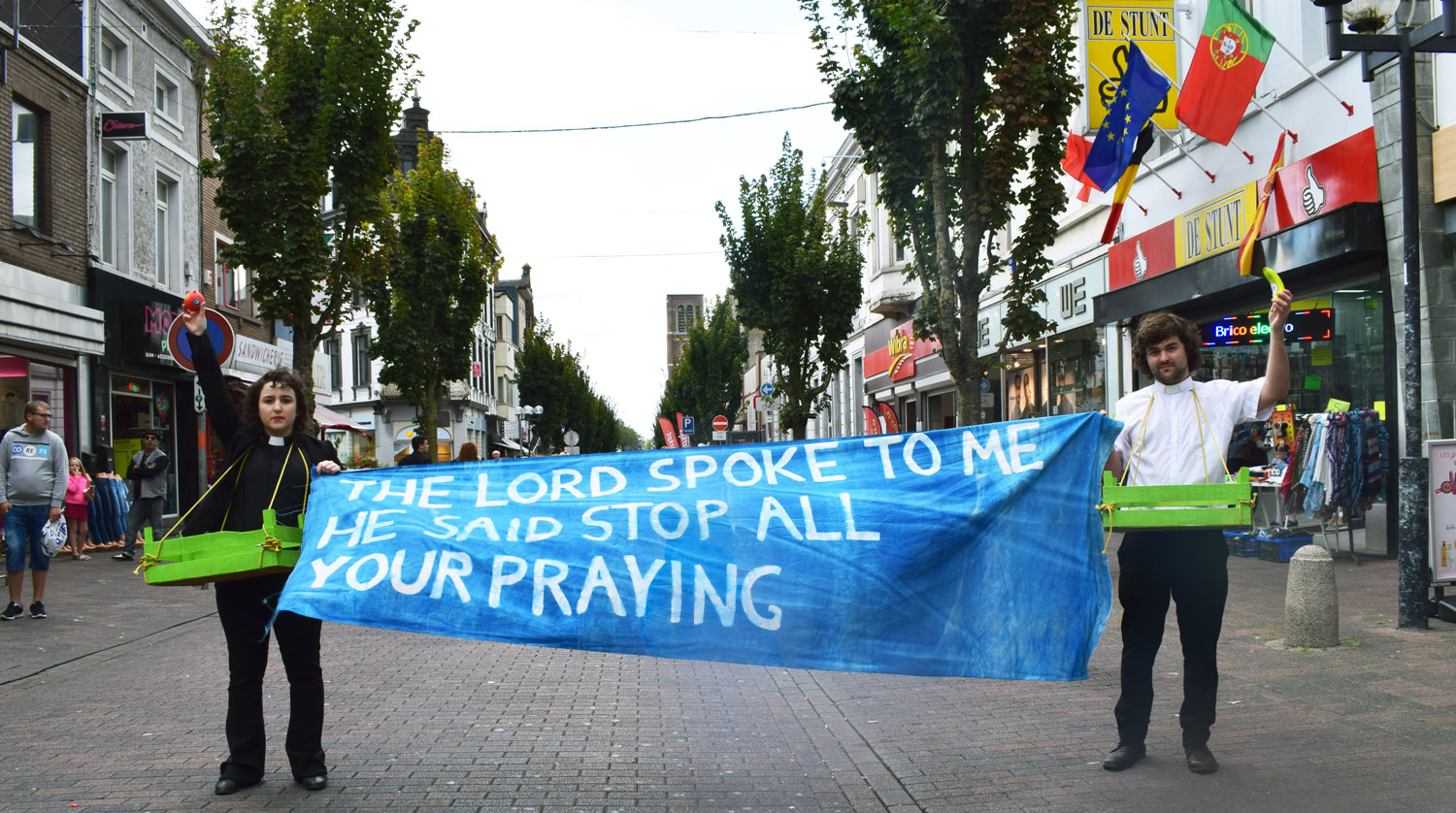 What are you working on next?

ES: Robin and I are currently in the process of collaborating with Peter Doolan, an Irish punk musician. We have spoken about plans for a music video which incorporates the egg and chicken scenario: which came first? Peter Doolan has applied this to arbitrary ideas around immigration. Everyone is born the same: the egg becomes fertilised, we are born, so why is it that some people are born into restrictions and others aren’t?

RW: I am also currently planning and searching for inspiration to start a new video or performance work, and I’m applying for residencies and opportunities.