Objects That Talk gathers together the stories of 65 things

Each object has been donated by a member of staff or alumni from the Product, Ceramic and Industrial Design programme. Ranging from the timeless notebook to the less timeless Teasmade, the selection offers a glimpse into the personal histories and preoccupations of the contributors, but above all demonstrates our connection to the things with which we live our lives.

In 1958, the artist Christo started making elaborately tied packages as artworks that he sent to various recipients, who when opening the package became complicit in the destruction of the artwork. This culminated in a package made in 1962 and sent to his friend the artist Ray Johnson. The package was photographed, carefully untied and the photograph inserted back into the package and sent off with a note to inform Johnson that the photograph was a record of the artwork he had just destroyed. My selection echoes this theme, an object whose functionality will lead to their destruction.
Bought at an airport on impulse, attracted to the exquisite detail of the retro packaging that locates the camera lens in the hubcap of the roadster. The thing about disposable cameras is that you don’t get the camera back after processing. So although I have taken about three shots I don’t know if I will ever process the film in my lifetime and it is so long since I took the shots that I cannot remember what I took. The exception being the photograph I just took of a vase of tulips on my mantelpiece. The camera normally sits in my cabinet of curiosities at home – a crypto palimpsest. 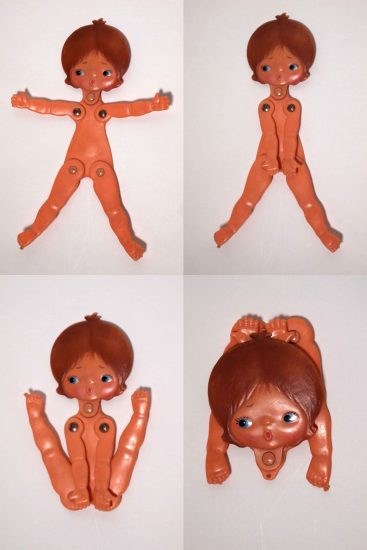 A pocket doll, literally. It is flat – almost bidimensional – and it could be nimbly folded. Head, arms and legs can be turned at 360° so it could easily fit into the back pocket of my jeans. It was called Metti because its slogan was: “Metti La Tua Bambola In Tasca” (literary “Put The Doll In Your Pocket”). There was a clear element of liberation and tomboyishness involved: I could take my doll with me when I was playing out with the boys, climbing and running and hiding and making general mischief. My first exposure to gender blurring. It has never left my side (if not my pocket) for over four decades. 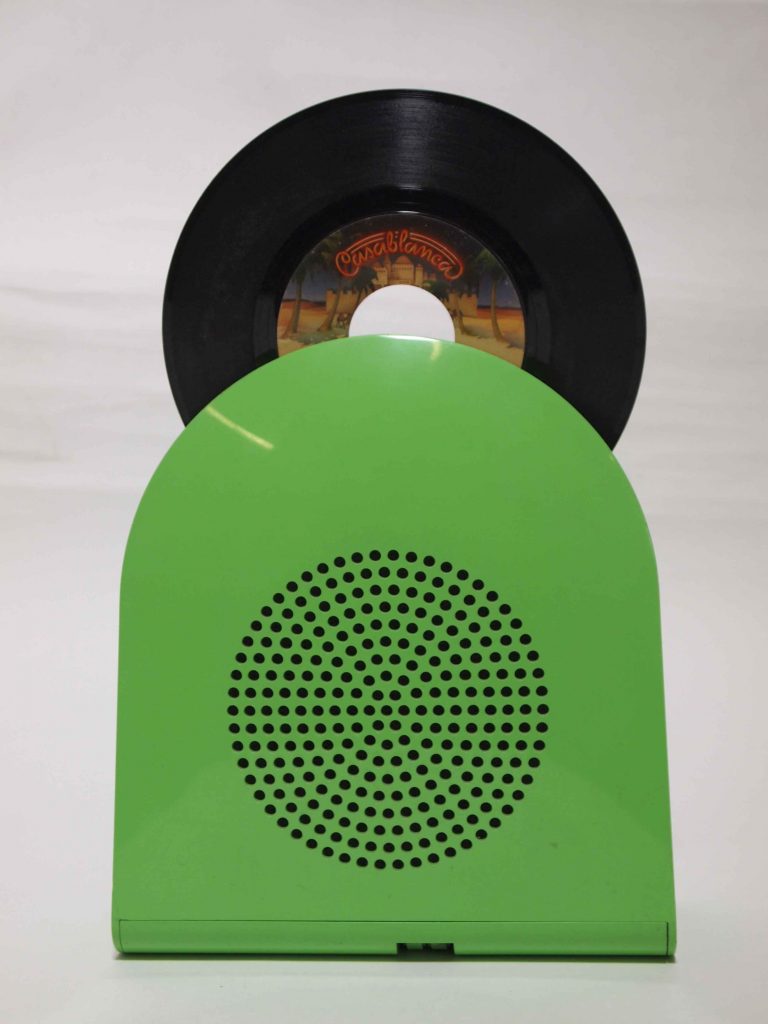 I bought this in a Milanese second-hand shop in 1992. It’s a period piece – you can only play 45 records on it. The design by Mario Bellini presents the playful side of Italian modernism with its handbag language emphasizing its place as a youth-oriented consumer product. It was originally released in patriotic green and red – the colours of the Italian flag. It really says: what’s wrong with fun? 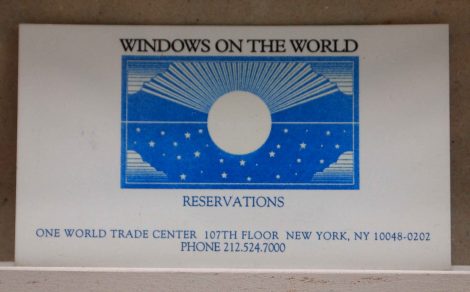 This simple, easily discarded object, is one of those mementos from a visit made at a time of great change in my life in June 2001. I remember the chance of taking the one single elevator straight to the top of the building, not to the viewing platform on the other building, but to this bar and restaurant, thinking that I might come here often if the interview at the Design Agency in New York went well. Three months later the world changed.
I found the card and framed it. I still feel the emotion in my skin when I look at it, for all that it reminds me of personally and obviously for what happened on that terrible morning

In China, it is said that if you visit the Great Wall you are a hero! I was lucky enough to visit the Great Wall in late 2016. I hiked approximately 3km in 3 hours, well, hiked is something of a euphemism for mountain climbing. The wall is a spectacular feat of human engineering, over 500 years old, as most of it originates from the Ming Dynasty (1368–1644). The wall is a testament to simplicity and appropriateness of materials. If you want to build a huge wall to span thousands of kilometres, then wood, stone and clay are perfect.
This is an original roof tile from one of the watch towers on the wall, circa 1500. I was given this as a reward from the person who took me on the wall. I like to think this was a heroic reward given to someone who understands the significance of the object. For this is no ordinary, ordinary object. This is a ceramic roof tile, that has been manufactured using the same method from the day it was placed on the wall c.1500 to the present day. This simple method of taking clay and pressing it into a wooden mould then firing to 1100˚C has been the definitive method for making roof tiles in China for hundreds of years. It is an example of a continuous definitive production process. It hasn’t changed because it can’t be bettered.