Paintings in Hospitals is an organisation that aims to improve the clinical environments of healthcare contexts by filling them with art. Earlier this year, as part of the organisation’s Art in Large Doses project, students from BA Culture, Criticism and Curation were asked to propose an exhibition for the waiting room at King’s College London NHS Health Centre, drawing from the Paintings in Hospitals collection. The resulting Nature Calls, curated by Sumin Cho, Markas Klisius, Yuxiao Luo, Yeline Mehaji and Joel Thompson, is on show until May 2018. We spoke to two of the curators about the curatorial process.

Tell us your ideas for the exhibition.

Joel Thompson: For me Nature Calls was all about not taking the brief too seriously and injecting a little bit of fun into the space. The first thing that strikes you as you walk into any NHS waiting room is how stark and bland they are, so for the project I wanted to juxtapose that with something a little more natural and wholesome that would hopefully bring a smile to people’s faces.

Markas Klisius: It was meant to be a space that detaches you from London and brings you to a place you associate with peace and warmness. We as a group made sure that everything was extremely straight-forward, and although the final product is not necessarily what I originally imagined it to be, it is still a space for people to forget about all the stress that comes from living in London.

What drew you to the artworks you selected?

JT: The artworks we chose all had subject matter that focused on nature and utilised greens and blues. It was important for us that the works weren’t seen as disparate pieces scattered around the space, so in order to create a cohesive environment we chose these pieces specifically as they all seemed to build into a calming , soothing narrative.

How does curating works for a hospital differ from curating for a gallery?

JT: It differs hugely in that so many others factors come into play. Firstly there’s the fact that another institution (the NHS) comes into the mix and wants to have its say on everything, so that slowed the process down a little when communicating. Then there was also the fact that we had to be especially careful about health and safety and sticking to legal guidelines. Most prominently for me though was how our usual concept of audience changed, this isn’t an exhibition for people specifically going to see art, it’s for a whole variety of students who are vulnerable and going to the health centre, so that really changed the tone of the project and how we approached it.

MK: The vision is definitely different for both. Not in terms of space because both are more or less conventional and can be manoeuvred around. To me it’s more about the aspiration and who this space belongs to. Nature Calls is made for staff and people waiting at the reception. It’s not really there to educate, but rather to accommodate. 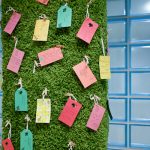 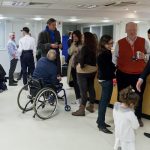 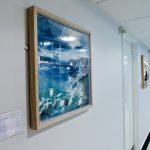 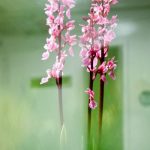 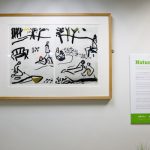 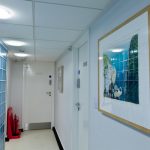 What do you hope people will take away from the exhibition?

JT: The NHS waiting room we worked with is one of thousands of, quite frankly, pretty drab, awful spaces around the country. I hope that the interactive nature of the exhibition cheers people up a bit and spreads the idea that the ability to change these spaces lies with us. There’s no real need for these spaces to be so grey and boring, all you need is a quirky idea and a bit of elbow grease.

MK: I just hope that the space will become less stagnant and clinical and allow people to breathe a bit easier. The works are there to compliment the space, not to take over. At the end of the day, it is still a Health Centre, not an art gallery.

What do you see is the main role of art in healthcare today?

JT: I think healthcare on the whole and the way in which we as society approach it has come full circle. People are much more aware today that health isn’t a strictly clinical concept, it’s about being wholesome in all areas of life and looking after yourself emotionally, not just physically. That, for me, is where art comes in; people have always used art as an outlet for their emotions, and as objects to use as a springboard for ideas about how to work around your own life.

MK: I don’t have a clear answer to that but people should continue experimenting within these spaces and bring these two worlds together. Art in many cases explores in depth one’s inner state, and it should also help one to find peace within oneself, providing an escape from harsh realities. When detached from the industry, art can be a safe space but with government cuts to art education in schools, Brexit and the tensions within our communities, it is important for our generation to emphasise the importance of self-expression and for future generations to speak out on these issues through art.