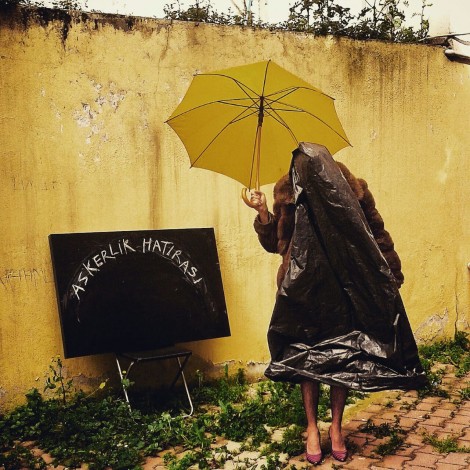 Mustafa Boga is a MA Fine Art student who specialises in filmmaking. He has recently been selected to perform during the Ai Weiwei Performative Acts series as part of the artist’s current exhibition at the Royal Academy. Mustafa spoke to us about the importance of art within social activism, the inspiration behind his work and studying at CSM.

Tell us about the piece you will be exhibiting as part of the RA’s Ai Weiwei Performative Acts series.

My performance piece explores the idea that it is okay to be a character of indeterminate gender, sexuality, religion and political belief in the confides of an art gallery in London, but that in many places of the world it is still dangerous, and often illegal, to express any ‘deviance’ from imposed behavioural norms. I play a nameless veiled character who staggers around trying to make sense of the world and represents people who feel lost, displaced or vulnerable.

What do you hope people will take away from your piece?

I’m trying to create a dialogue between feelings of compassion and threat. Some people might initially feel a bit unsettled by the strange character because they cannot pigeonhole its characteristics, but it has no voice and means no harm. Some people might laugh and others might feel uncomfortable about the laughter.

The performance asks viewers to question their feelings towards both the character and the reactions of other people in the gallery. Our perception of those in society who appear threatening, vulnerable, sad or comic is largely dependent on our own life experiences. I hope the performance encourages people to think about these relationships, which I believe, are especially important at this time.

Do you think that art is an important vehicle in promoting human rights issues and political activism?

I strongly believe that art has a very big impact in promoting human rights issues. In a world where liberal and accepting viewpoints can be drowned out by extremism, art is able to reconnect people with their humanity.

Tell us about your practice in general and what inspires you.

I’m fascinated to see that everybody has their own thoughts, beliefs and ways of living, even though we have set rules in life. Individuals who adapt to new conditions, by circumstance or choice (and find a way to cope) inspire me. However, there are times when people become dislocated from society, stuck between memory and imagination, truth and lies, fantasy and reality. News events are often my inspiration.

My work examines the fine lines that separate art from documentary, journalism from fiction and drama from scripted reality and examines how this has led to the trivialisation of issues such as discrimination and prejudice. I’m also interested in how contemporary multi-media manipulates our understanding of current affairs.

You’re currently studying MA Fine Art at CSM, how has this course influenced your work?

Before this course, I was unaware of my abilities and wider interests. I had ideas about creating work but didn’t know where they were leading me. During the course I have searched and experimented a lot. When an idea comes I usually question it a lot because I studied journalism, but through my film making course I have started to interpret everything as a moving image.

Now, I believe I can create work by exploring my identity and thoughts without self-censure. I have been trying to explore my ideas in other media than filmmaking, and I have tried 3D printing, watercolour and collage paintings, photography, screen-printing and now performance. Now I am thinking about my creative process differently the outcomes are more varied.

What about upcoming projects?

Some of them are related to my own experiences and some of them will be human-interest documentaries. Answering the question ‘who are we?’ as a way of creating a portrait, and my aim is to look at people with a journalistic perspective.

What I have realised is that, though we are generally aware of our identity, we are often less conscious of how social pressures affect us. At the moment, I am exploring issues relating to why gay men are not considered appropriate for military service in Turkey. Are they simply seen as lacking in either emotional or physical strength? Is it a trust issue relating to a life of secrecy? Which stereotypes are drawn upon?