After archival research and an immersive workshop with members of the local community, the project culminated in a performative intervention, staged in the Palace’s Palm Court, which heralded the Palace’s lesser-known history. Here, Fiona Costelloe talks us through the project’s aims, influences and why reviving the history of events such as Rock Against Racism is so important today.

Tell us about The People’s Carnival.

The People’s Carnival was an archival and community driven project to research and critically address submerged histories of local and minority communities in relation to Alexandra Palace. The main aim was to develop innovative outreach and curatorial strategies to engage local communities and concert goers with those histories.

The project was initially created as a response to the material found inside Alexandra Palace’s archive; we were struck by how little there was of BAME (Black, Asian, and Minority Ethnic) representation in performances and the Palace’s surrounding communities. The issue of representation and agency within Ally Pally – known as ‘The People’s Palace’ – was evident. We curated a day-long workshop of discussion, costume, music and performance which culminated in an intervention staged in Alexandra Palace’s Palm Court to an audience of Royal Blood concert goers and the general public.

What influenced your carnival-inspired approach?

The idea of a carnival stemmed from ephemera of former cultural events we encountered in the archive which included the All Night Carnival of Jazz, Cultural Festival of India, Capital Radio Jazz festival and Afro punk. We branched out to other archives and institutions to uncover more about Haringey and the Palace’s diverse performance history, these included Autograph, Black Cultural Archives and the Stuart Hall Library.

We discovered that Alexandra Palace had hosted the Rock Against Racism Militant Entertainment Tour Finale on 14 April 1979. Formed of carnivals, gigs, marches and DIY ephemera, the Rock Against Racism movement used music to combat racism and fascism. By bringing punk and reggae bands together on the same stage different audiences were encouraged to break down existing social barriers and racist attitudes. As curators, thinking about the context of Ally Pally and its outreach programme, Rock Against Racism struck a chord with us all – its ethos encompassed the project’s aims and our aspirations for The People’s Carnival. 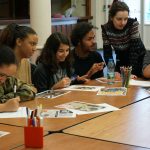 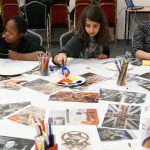 Why did you feel it was important to revisit these particular events?

In an age of fear mongering, terror, hate crimes, cultural divides and Brexit conversations, platforms of creative self-expression are integral to resisting prejudice and confronting such issues. Seeing the success of recent events such as One Love Manchester, Notting Hill Carnival and Music for Grenfell we were drawn to using the Palace’s connection to Rock Against Racism to explore similar issues, alongside reviving a pivotal aspect of Alexandra Palace’s diverse performance history.

How did you work to engage the local community in the project?

We chose to work with Haringey Shed, the Tottenham-based all-inclusive theatre and performing arts company for children and young people, because of their previous relationship with Alexandra Palace and their ethos towards participation. We hoped to strengthen their existing relationship with Alexandra Palace, provide a space for their young members to discuss their own experiences in relation to Rock Against Racism materials and access a different learning experience.

Can you tell us a little more about the workshop?

Seeing how a DIY ethic had empowered the punk movement and heavily influenced Rock Against Racism and even seeing it today through YouTube and Soundcloud, it felt like the most appropriate way to work with participants.

Following a quick warm-up game we introduced the participants to the project and Rock Against Racism movement. With printed materials, video footage and a space for thought and response, the session was a platform for everyone to have their say. We found that the Rock Against Racism subject matter really resonated. There was also a music session led by Rennell Shaw, which saw participants develop their responses into rebellion songs, and a costume session devised in collaboration with Florence Scott. The costume session was very successful, re-engaging the attention of less able participants and providing a platform for visual exploration of responses. Inspired by Rock Against Racism’s DIY Punk Culture costumes took the form of customised T-shirts. We set up the table with RAR images, protest slogans, paints, pencils, pens, sponges, rollers and brushes and encouraged participants to draw and paint ideas and designs for their T-shirts directly on to sheets laid out on the table. 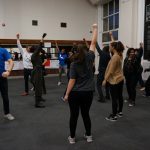 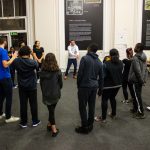 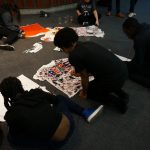 How did these workshops help shape the final outcomes?

During the workshop the participants devised a flash-mob to perform in the Palm Court. Led by Haringey Shed’s Artistic Director Eddie Latter, this intervention consisted of choreography based on 70s dance moves, punk and reggae movement mixed with protest style performance and strong slogans, which had been developed during the day.

The People’s Carnival took place before a gig at the Palace. How did people respond to the Carnival?

The performance consisted of three Flash Mob style interventions staged throughout the evening. Reactions spanned amusement, annoyance, awkwardness and curiosity but overall enjoyment! The performance achieved the intentions of catching people off guard, making them question what was happening while also setting the ethos of the Rock Against Racism movement within today’s context, re-enacting an integral part of Alexandra Palace’s diverse and less known performance history.

After we’d shared the project on social media both Alexandra Palace and Haringey Shed were contacted by people who attended the Rock Against Racism gigs or were involved in the movement and wanted to find out more, suggesting that a wider demographic of people are now aware of this integral element of Alexandra Palace’s history. 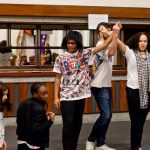 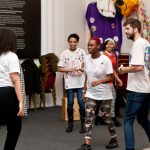 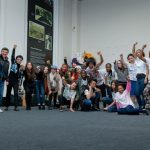 How can the curation of events like these work to unite people?

An event like this has the potential to break down existing social barriers today. Bringing different communities together was central to our aspirations behind the project and will have enriched Alexandra Palace’s diversity profile in the local community. Alexandra Palace is planning to focus on its affiliation with Rock Against Racism while Haringey Shed is keen to build its relationship with both the Palace and Central Saint Martins. We also hope the concert goers are more aware of the Palace’s heritage and connected to its local community.

The People’s Carnival took place in November 2017, you can also read more about the project over on Alexandra Palace’s blog.