A new website, London is Changing, asks people moving to or from the capital to give their views on recent developments. This week, some of these quotes can be seen on large billboards in the city centre.

London is Changing is the brainchild of Rebecca Ross, Course Leader for MA Communication Design. We spoke to her about the project:

What was your inspiration for London is Changing?

Rebecca: A lot of the ways the city is changing are brought on by policy and by economic development, but it’s a difficult topic to discuss in a way that’s productive and does the emotions associated with it justice.

It’s really hard for a lot of people who are experiencing trouble getting by in London to understand exactly why that’s the case. That it’s something systemic and not just their own personal failures.

I want to facilitate a city-wide discussion that features the voices of average people, and not just the voices of organisations and corporations that can afford big expensive media.

How did you choose the name?

Rebecca: The project is called ‘London is changing’, not ‘London is getting worse’. That’s because there are many positives that continue to bring people to London.

It’s not just about London becoming untenable for middle class people, who can’t afford their perfect flat in their zone one or two neighbourhood. It’s also about people coming to London because there is a lot to be gained here – and valuing that.

People used to put up A4 pages when they were renting their flat or looking for a drummer for their band. Those kinds of person-to-person communications are done on the internet now. What’s left in the built environment is much more institutionalised.

This is a chance to take some of the things people discuss on the internet and actually put it on the street. 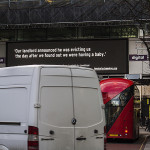 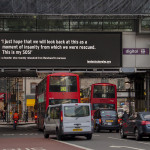 Rebecca: A former BA Graphic Design student, Duarte Carrilho da Graça, worked on it with me. We designed the tables to prioritise personal narratives, but so they have some additional data associated.

This way the narratives could be cross-referenced with some of the aggregate quantitative work done by the Mayor’s Office and the Office of National Statistics, for example.

The idea is to create links between personal stories and some of the data that doesn’t often get into human specifics. Numbers are summaries of our experiences, but I don’t think people feel a sense of how they themselves fit into the summaries.

Your other projects often look at cities from aerial perspectives. How does London compare?

Rebecca: One of the things about London that’s really striking – relative to American cities and other cities in Europe – is that there’s so many boroughs and each borough has its own government. Because of this, city-wide change can happen in a way that’s really complicated and hard for people to engage with.

The other piece of research I’m doing right now is about the history of postcodes in London. Going right back to the 19th century, it was really hard to get the different local area vestries to cooperate with each other.

The post office was unable to push through changes to street names and numbering systems sufficiently to be able to deliver the mail. People would move house, bring the number with them and just stick it on their new door. The postcode emerged out of the difficulty. 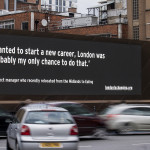 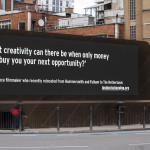 What do you think about Central Saint Martins’ role in the King’s Cross area?

Rebecca: Spatial Practices held a series of debates about that last year, as part of Restless Futures. We did a live edit of the Wikipedia page for Kings Cross Central, which is the name that the developer has given to the area.

Obviously Central Saint Martins is part of the engine generating ‘cultural capital’ in this area, which then allows them to generate real capital. The luxury flats next to us are called ‘Art House’.

What’s the one thing you want students to take from your teaching?

Rebecca: Students who sign up for the MA in Communication Design already want to make stuff. We want our students to maintain that energy and drive, and develop those skills in depth, but to go beyond making for its own sake.