Having only just been introduced to the concept of virtual reality, MA Fashion Communication and Promotion student Kuohao Chung shot a VR art-fashion experience in the College’s Platform Theatre last month.

Kuohao told us more about his experience and inspiration in conversation with Ged Matthews, Creative Producer for the Platform Theatre and organiser of the College’s VR meet-up group,

Kuohao: This project is basically talking about melancholia, fashion and disease. It’s about homosexuality, how gay people live in a closet, they are a bit afraid to come out to their family and people they know.

I wanted to build a large circle with videos projected around it and two dancers in the centre. One of the dancers performs as a mental health patient and the other dancer is their ‘shadow’, representing their dark side. One of the videos shows how an environment influences the patient, and another video demonstrates how the same patient influences their environment. The ‘shadow’ wants to ensnare him into darkness.

Ged: What initially inspired the piece?

Kuohao: I am inspired by my personal experience but I also did a lot of research about people with mental health issues who work in art and fashion. I discovered that often they share similar characteristics, for example, some feel an extremely close bond to their mothers, sometimes they fall into alcohol abuse and drug addiction. Designers don’t like to share these types of personal experiences so I had to read a lot of books and interviews, and I did my own surveys. 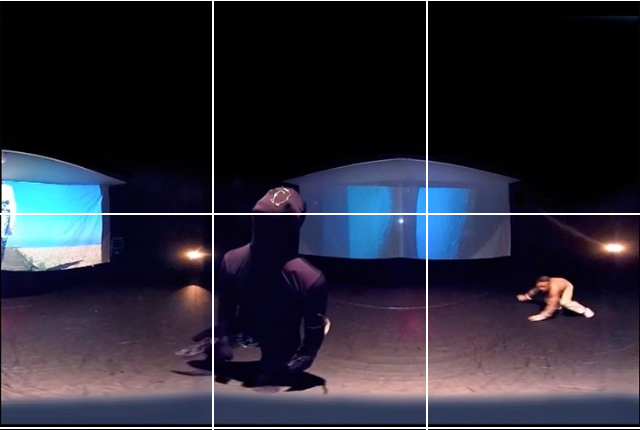 Ged: Had you initially considered using virtual reality to create this piece?

Kuohao: No, originally it was going to be a video exhibition in the Window Gallery. I had heard of virtual reality, but I didn’t understand it. Before I started work on the project you asked me if I considered working with VR, after that I did some research and went to the Bjork VR exhibition at Somerset House. I liked it a lot and thought about the mood I wanted to achieve. Bjork did a lot of animation and was more technically advanced, but I wanted to be more experimental with blurred images.

Ged: You shot the project yourself, how did you find it?

Kuohao: Yes, I shot it in my studio, as well as some in a national park in Kent, and built six different sets for it. I want to create moody atmospheres, slightly blurred.

Working with a 360° camera is a tricky skill as the technology is not really mature yet. You can’t really see the footage when you record it and you have to have everything set up. It’s more like a performance, you cannot stop, stop, stop.

Ged: Your film explore its main themes through dance…

Kuohao: I’d never worked with dancers before. I asked my friend who is a dancer for help. The other dancer I spoke to a lot about the project before it began, I showed him lots of video so he could better understand what I was trying to achieve. Dancers are creative people – they use their body to express what they think. It’s very different to fashion.

Ged: When can we see the final piece?

Kuohao: Nude Kid Kills Parents, will be streamed in 360 video from 26 November at nudekidkillsparents.co.uk/ across London and Taiwan. There will also be a launch party on 11 December at VFD in Dalston, with four VR headsets and an installation to view the work.