Jin Yu is a director and designer of animated films, and is currently the Visiting Animation Artist-in-Residence at CSM following a previous residency at the Columbus College of Art and Design.

We spoke to Jin Yu about her work, the differences in styles between Chinese and English animation, and what she’s been working on here at the College in the last three months.

Can you give us some background about your work as an animator?

I studied animation at the Beijing Film Academy in 2000, where I created my first short film: Web In, in 2002. I joined China Academy of Art as an Associate Professor in 2004, and have been teaching animation there for 14 years. I have directed several short films including: Love is a dream 2006, Flying Kites (which was the Opening Animation for the fifth China International Cartoon Animation Festival, 2009), Nostalgia 2011, The Plum Blossom 2013, and A Women’s Life 2014. My work has been shown at international festivals, and some of my films have won awards.

What first drew you to animation?

When I was younger I had a strong interest in comics and painting. I studied graphic design at Zhejiang Sci-Tech University, and when I was in my second year, a teacher visited from Beijing Film Academy to show us a short animation film, I have forgotten the name of the film, but its special art style is still deeply rooted in my mind. The film was quite simple, but the metaphorical meaning was impressive. I thought it was a really interesting animation, and a good way to use animation to express an idea. Then my college decided to select two students to send to learn animation at BFA, and I was lucky enough to be selected. The BFA was the best institution for teaching traditional animation in China at that time.

Why did you apply for this residency?

The project has been made possible by the British Council and CICAF (China International Cartoon Animation Festival), and I am the second Chinese Visiting Researcher and Animation Artist-in-Residence here. Central Saint Martins is very famous in China, especially in terms of animation, illustration, and fashion design. I think this is a great opportunity to share different ideas, different culture, and different animations with each other.

My main motivation to come over here was because of the diversity of animation in the UK. I can see different creative work here, and the students from all over the world here have incredible ideas. I also wanted the opportunity to do some research into animation, because there was more in-depth and systematic theory of animation in Britain.

How are you enjoying London and being at Central Saint Martins in particular?

The atmosphere here is quite relaxed. CSM is a very vibrant community which is an ideal platform for creative students and tutors to research and practice animation. I feel a sense of creativity in the building every day. I love coming to the College and seeing the Degree Shows and students who are busy installing them. I really enjoy working with students, especially in the workshops. 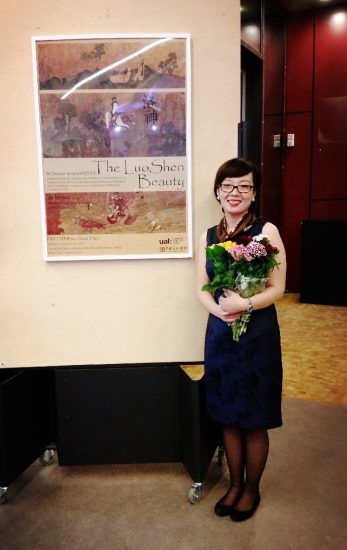 You’ve been leading seminars with CSM students about Chinese animation, and also workshops in watercolour and ink techniques. What sort of things have been covered in these?

The Chinese animation screenings mainly shared some excellent animation works from CAA, and I gave an introduction to my personal animation work and experience. In the second film screening, I introduced some Chinese contemporary film, and some independent animation short film to the students.

The watercolour workshop is a practical session in watercolour and ink painting and mixing for artists and designers. I introduced the students to skills of the traditional Chinese ink painting and watercolor first, and then showed some famous 1960 ink animation films from China. Then I shared some new exploration work about ink painting in recent years, and explained the process to my students and my new work which practice in ink painting animation.

What are the main differences in style would you say there are between Chinese and English animation?

Chinese animation in earlier years was often poetic and lyrical; focusing on beautiful images and visual effects. In recent years, Chinese animation has had more of an emphasis on a complete story, a profound meaning, or emotional expression. Most of the academic animation works are narrative in the traditional style, with a few using conceptual and experimental styles. British animation is very interesting, and also very funny.

Have you made headway with any of the work that you’re going to be exhibiting at the end of your residency here yet? Can you tell us a bit about it, or what you might have planned?

There will be five of my animated films in the exhibition. These are finished works, and I will also have another film on display which is not finished yet, which is an adaptation of a traditional story about a famous Chinese classical poem and painting about a love story. This is a complete narrative story in the original already; it is a rich source of inspiration for plot lines. But the original version also lacks emotional expression. I want to use animation to explore my ideas and emotions, and to make this animated film using ink painting and watercolor. Although it is a Chinese story, it also could be understood by audiences from all over the world.

How will this residency benefit your own practice? What do you hope to learn from the residency?

I have gained a lot of fresh ideas by working with a variety of students in different workshops. While I’m here, I hope to visit as many places as possible, to see as many exhibitions and films as I can, and to also participate in the Rough Cut Crit course.

The challenge for animators right now is that there is an influx of ways of experimental working. An animation director needs to know about the huge amount of skills and time to slip side between the different forms of art works. I think animation needs to not only take one form; we must try to work differently, implement bold innovation, be open to everything, use animation to realise our ideas.

I really appreciate Steve Roberts, thanks for his help and friendship, and thanks to everyone I’ve met here.