In 2015, Sarah Christie was awarded one of three £2,500 Mead Scholarships and Fellowships designed to help students develop their creative practice.

In the last year she has used the scholarship to create a body of work that will support observational learning in medical education at Imperial College.

As she currently prepares for the Degree Shows, we spoke to Sarah about her continued work with medical students at Imperial, her final project inspired by the Ancient Greek voting methods, and what she has planned after graduating.

Tell us a bit about the project you’ve been working on as part of  your Mead Scholarship project.

I did the project over the summer last year, partly because I wanted to be able to use the work that I made in the workshops I was doing at Imperial College, and so I aimed to have them ready for that academic year. What I didn’t realise at the time was that the Imperial College academic year actually starts in July. So I actually introduced the work gradually a little later on. I wanted to trial it in the academic year that’s about to come to an end. One of the things I wanted to do when I applied for the scholarship was experiment with working more independently so actually I did it separate to here. Unfortunately, I couldn’t fire anything here at the College so I had to find somewhere else to work. So it was quite independent in a way.

Can you tell us a bit more about what you were doing for the project?

I made what is essentially a handling collection of objects for a workshop I run at Imperial College with fifth year medical students. The workshop is about observation and it’s done through touch. It’s part of their dermatology teaching and the reason it fits with that is because most skin conditions are completely on the surface and diagnosis of skin conditions is often done visually. The idea is to encourage students to use touch more in their examinations. It makes patients feel more cared for, perhaps even more important is that it provides doctors with a lot more information about what they’re looking at.

The objects I’ve made are in bags, and students have to put their hands in the bag. What I asked them to do was explore that object through touch without looking at the objects, and then write a description of it. So in a way it boils down to communication skills, we’re asking them to communicate what they have through descriptive language. Almost all the objects I use are unidentifiable, and the reason for that is so they don’t rush to identify something. We’re trying to give them a bit of space to not stop at the first thing they discover. With that in mind the objects I created are designed so that there’s several of a particular feature, or there’s something hidden, or there’s a distraction.

How easy is it to make something that doesn’t allow people to jump to conclusions?

It’s quite difficult actually. Normally ceramics students are making objects to be looked at – possibly to be touched, and possibly to be engaged with as well – but you begin by looking at them. This is a set of pieces that aren’t to be looked at. They are eventually seen, but their first engagement with it is blind essentially. So that’s a weird thing, because all of us are trained to see whether something looks right, and this was almost turning it inside out. I made a lot of those pieces while paying minimal visual attention to them.

Can you tell us a bit about your creative process in making the objects?

Medical students have a rich medical language that they can use to name things, they have a name for everything under the sun. Some of their words are reminiscent of visual features in the landscape, they talk about fissures, they talk about excoriation, and there are also words like nodule and papule and reticular. I made a list of as many of these words I could find and tried to think about how the pieces would recall that language. That was how I started. Then I went through all my photos and found images that helped me create build-ups and surface textures. I didn’t make literal ceramic versions of diseases, because they’re used to that: they have model arms and model lesions to work with the rest of the time. This work needed to do something different.

How has your Mead Scholarship benefitted your practice?

It was amazing; it was so helpful. First of all it allowed me to do the project in the first place. When I applied I didn’t expect to get it, so I sort of did it as much for the experience of the application as expecting to get it. When I was awarded, it was slightly nerve-wracking because you pitch a project and then you get and then you realise, ‘I actually have to do it now, how am I going to do it?’

It enabled me to overcome a sort of sense of trepidation about how to work outside of CSM. We’re really supported here and you get used to that and you sort of rely on it. But this was an opportunity to work completely independently. It allowed me to explore a lot and reinforce the work I was already doing at Imperial College. I started volunteering there the previous year, and then when I won the scholarship, they offered me a job to start teaching there. Which came out of being able to offer them a bit more.

What are you working on now for the Degree Shows?

Quite a few subtle things have developed with this project from the Mead project. My background before I came here was in books, so I’ve always been really interested in words and language, and actually it’s often been a starting point for me. I’ve also always been interested in what happens when you bring difference disciplines together. This next project is also about language. I’m taking that emphasis on description, language and words forward and into a slightly more interdisciplinary way of working. I’ve been adopting techniques from typography and letterpress printing onto clay to create my show.

It’s also going to involve participation, which I think has also come out of working on the Mead project. I’ve made a large number of pottery sherds, cast from bowls and then broken. In the show I’m going to invite people to write on these, in the tradition of Ancient Greece. These were used for voting in Ancient Greece – it was called an ostracon, which means “pot sherd” in Ancient Greek, and they used them to vote, and it’s were we get the word ostracise from. They would write the name of somebody they wished to cast out of Athens and if they got more than 6000 with that name on it then that person would be sent away for ten years. Their things would be kept with the view that they would come back again, but they would first go away and sort themselves out. So I’m going to introduce that into the show, I’m still working on the exact structure though. It’s going to invite people to act through it or with it, and that’s where it will gather it’s meaning.

What will you be working on next?

Right now I’m trying not to think about it too much so I can get my final project done. I’m going to be working with the artist Clare Twomey over the summer on her project ‘Time Present and Time Past’ at the William Morris Gallery up in Walthamstow. Then I’m going to go back to the studio I had last summer and I’m going to make some more work for Imperial College, and then after that I don’t know! I’m going to see where it goes. I’d love to do an MA at some point but probably not right now. I’m going to have at least a year to figure out what’s what. 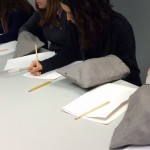 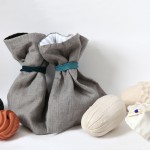 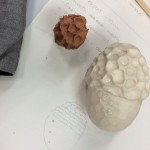