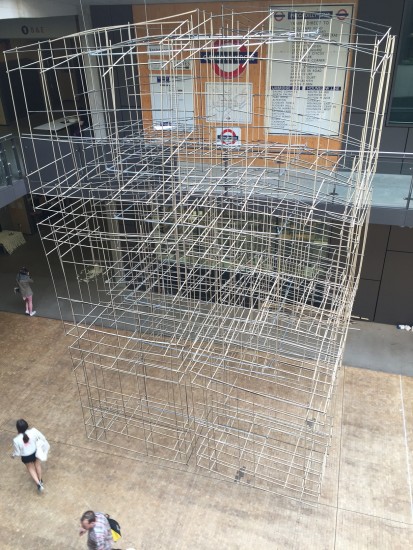 In a series of interviews, we talk to our graduating artists about their practice and process…

For Degree Show One, Sergei Zinchuk (BA Fine Art) has created the ghost of a house from the unassuming combination of plywood and cable ties. Suspended from the ceiling, the gridded form hovers in the atrium space at the College.

The piece began life in an impromptu exhibition of work at Zinchuk’s own house. This year, the BA Fine Art students have collaborated in the curation of the degree show, the process started with them self-selecting into groups. One of the themes connecting Zinchuk’s group together was an interest in place so one evening he brought them to his rented Victorian terrace house (no.17) and suggested each person make work for a particular space, in 17 minutes.

Through this fast process, Zinchuk made a 3-dimensional grid within one of the rooms. This exercise in space sparked something within the Ukrainian artist and he sketched up the idea for a larger, storeyed structure:

It started off as a map of this London house to which I’m an insider because I live there but I will also always been an outsider because I grew up in completely different linear, socialist housing. There’s something kind of desperate about that kind of London house… I like the way my final piece clings on to the modern building around it.

Questioning how the organisation of space influences us, Zinchuk’s installation invites the viewer to walk through its form, experiencing it from the inside.

Wanting to get the physical object as close to a 3-dimensional drawing line as possible, the construction and installation has been quite a feat. Experimenting with material, he tried welding, thinking that he’d like the rigidity of metal: “I hated it. Perhaps it’s my personal fear of commitment or I just don’t like working with materials like that.”

He settled on plywood strips and cable ties, enjoying their quiet anonymity – “as close to a non-material as possible,” he says. The installation took Zinchuk and a friend four days, building a floor at a time, raising the piece up and building the next floor. What had been drawn up with straight lines and angles soon became gently bending and leaning as it took physical shape:

I strangely like that. I was open minded. When I’m in the process, I’m just in it and whatever happens happens.