Thomas Moore spent his summer in McDonalds sketching. “I wanted to do a personal project,” the third year BA Graphic Design student explains, “I was looking at fast food and society, our negative relationship with food. I was going there every day to draw people as they ate. I exaggerated everything so it looked grotesque.”

At the same time, he happened across a call out for a commission from the Royal Society for Public Health. To mark its 160th anniversary, the RSPH was looking for someone to reimagine William Hogarth’s famous Gin Lane cartoon. Seeing the commission from the middle of his McDonalds project  “it was a perfect fit,” he recalls. The RSPH selected Moore and he set out dissecting the 1751 Gin Lane, analysing its composition and planning how to update it for a contemporary audience incorporating today’s public health issues. Where Hogarth had focused on gin consumption and malnutrition, Moore looked to fast food, obesity and mental health. 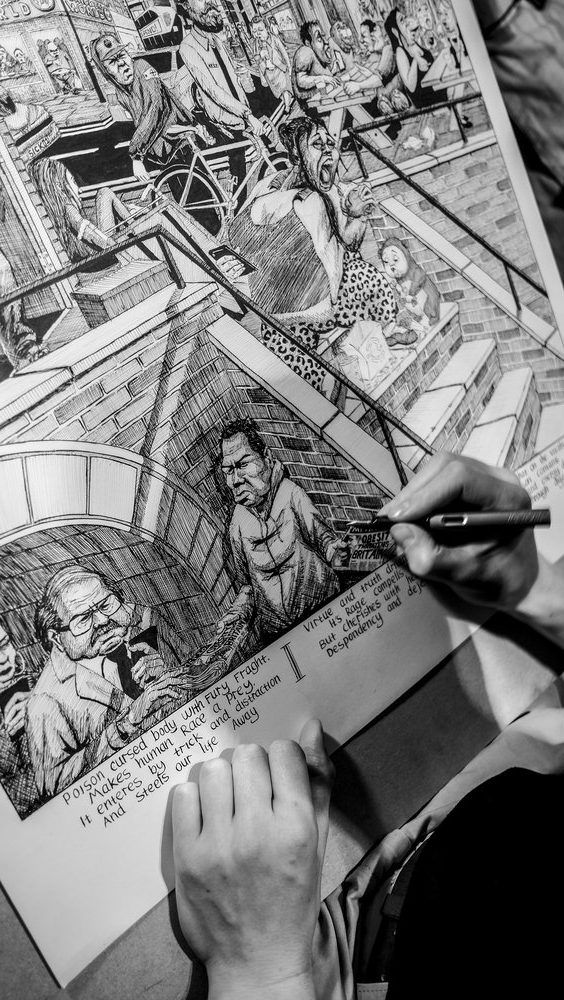 Hogarth’s original was darkly comic, something the young designer is inspired by. “Hogarth was the grandfather of satiric cartoons and his work can be so dark,” Moore explains, “in his Gin Lane there’s a guy walking down the street with a baby impaled on a stick.” While not so graphic in its portrayal, the contemporary reinterpretation retains this bleak sense. For Moore, it is important that his target isn’t the people depicted:

It is an attack on the fast food corporations and payday lenders. Like Hogarth’s original, it’s not a criticism of those characters in the image but society at large, and the inhuman structures that essentially prey on those people.”

Once the components were set, Moore began drawing out the final piece (the original was an engraving, this contemporary version is pen and ink). Following the unveiling of Gin Lane 2016 at the RSPH’s offices in London, the media attention saw Moore being interview by John Humphrys on Radio 4’s Today Programme. There are galleries interested in showing Gin Lane as well as talks about creating prints and perhaps more Hogarth-inspired commissions, Beer Street could be next.

It’s been really surreal, I threw everything at this commission. It was one of those beautiful moments when you work hard and it pays off.”