Following 24 years teaching at the College and 18 years as director of the Fashion Programme, we talk to the wonderful Willie Walters about her career, her students, and the prospect of a future without fashion.

Congratulations on your retirement!

Thank you. I’ve decided to stop when things are good. I’ve taken on what I always considered to be the most exciting course in Britain and it’s been my duty to keep the vision and standard high. I feel humbled and honoured to have been here, made a mark and worked with these extraordinary people.

If we can begin at the beginning, did you always want to work in fashion?

I’d made my own clothes and that was my private passion. But I was the sort of girl who was good at drawing, so I wanted to do something related to art but wasn’t sure what. I came to London from Scotland and studied painting at the Byam Shaw School of Art and realised within a few months that it wasn’t the right place for me.

Back in those days, most fashion schools were pedestrian and I wasn’t interested in designing the A-line skirt or flattering the female figure. If I was going to do something it was going to be an experience and an expression – no holds barred! I discovered Saint Martin’s School of Art and was so impressed. I put together a portfolio, applied and got accepted.

You were self-taught so did you enjoy the change to formal fashion education?

It was quite a struggle when I got to Saint Martin’s and had to do things in the traditional manner. The design wasn’t conventional but the construction was. It was so mathematical, I much prefer to drape on the stand – now we give students the choice. 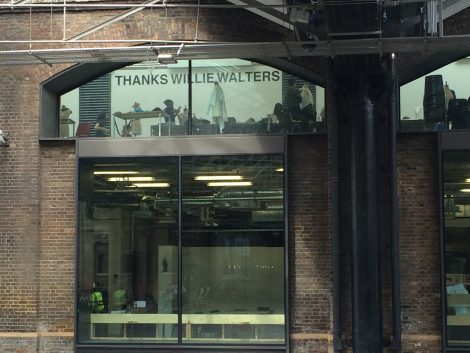 CSM students’ tribute to Willie in the fashion studios.

And what happened after graduation?

I don’t think I was particularly employable. My final collection was conceptual. I designed garments with fairy lights and tiny humans all over them. And I was five months pregnant!

One of my friends was Esme Young [star of the Great British Sewing Bee and BA Fashion tutor] and we started a business called Swanky Modes together with an old school friend. Retail space was cheap then, and we took over on old cobblers in Camden Town and began making things.

We would hunt for fabrics that were 20 years old and cheap, now you’d call them vintage. We found this amazing 50s shower curtain fabric, printed with powder-puffs and fish so we made rain clothes that could go over your outfit – bomber jackets, macs and circle skirts.

We thought of it as commercial and practical but little did we realise it was extreme high fashion! Caroline Baker at Nova magazine – she was the best stylist of the era – passed them onto Helmut Newton and a few months later we got four pages! 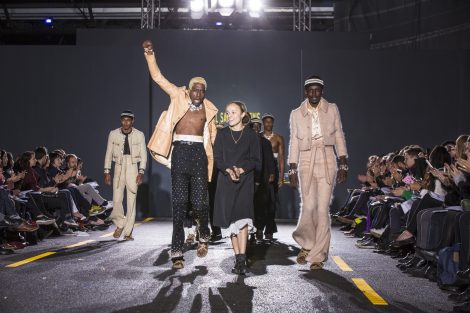 When did you start teaching?

By the late 80s, I felt like I’d had enough. Things had been up and down like a rollercoaster as fashion, and the economic aspect of Britain, changed. So I began training as a photographer. I had taught a little before in other colleges, sometimes it was fun and other times it was a dreary grind. But out of the blue I was asked to teach at Saint Martin’s by Wendy Dagworthy, the new course director who wanted to shake it up.

I hadn’t been to the College since I graduated. When I began here it was a race with myself to be good enough to teach them.

To be kept on my toes, to be able to connect with the student whatever they were doing. There was an incredibly wide range of work in each class, from pretty floral numbers to clothes made of concrete that you could not stand up in. I wanted to be useful to all of them. 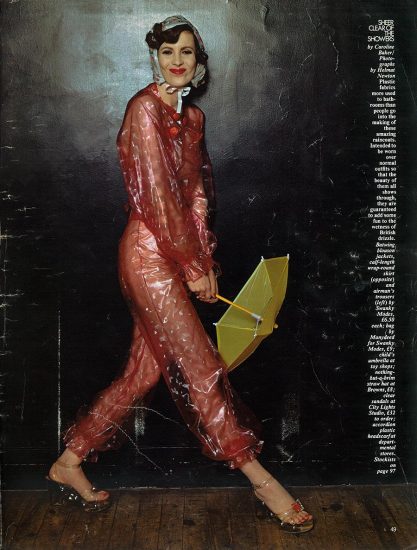 What are your strongest memories of working here?

The end of year shows, definitely. Usually, I’m on tenterhooks right until the end and it takes me a week or so after to sit, look over the photos – really see it. We were looking over some of the shows in the 90s recently and Hussein Chalayan’s was so stunning. And Edward Meadham’s in 2002. Oh and Gareth Pugh was a great finale in 2003. One recent collection I remember with great pleasure was Grace Wales Bonner’s in 2014, such beautiful work and so innovative.

I haven’t stopped since I was 22. I still love to paint and draw. I have three grandchildren and I want to spend time with them. I want to read them stories, do gardening with them and chase them around the park!