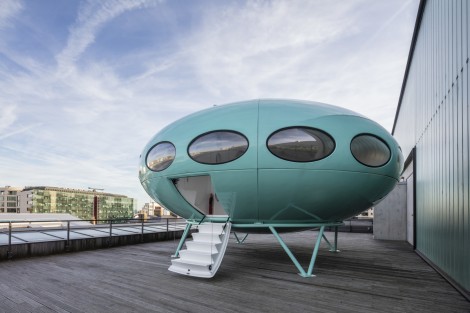 Is it a bird… is it a plane? No. The unidentified flying object on our roof is a Futuro House, due to host a year-long series of events.

The spaceship-like construction is the project of artist and Central Saint Martins BA Fine Art alumnus Craig Barnes. His vision is for it to be an active space, open and provocative.

Craig says: “My Futuro has led a nomadic existence. Following its initial siting at Matt’s Gallery last year, it was a delight to be invited to land it on the roof at Central Saint Martins, an equally progressive institution.

“I look forward to a year of inspirational activities in it with Captain Till and his crew at the helm.”

Back to the Futuro
Futuros were originally designed by Finnish architect Matti Suuronen as prefabricated weekend houses. Unfortunately, because the oil crisis of the early 1970’s caused oil prices – and plastic prices – to treble, less than 100 were actually made.

Around 60 Futuro Houses are known to still exist today. Craig Barnes rediscovered his ‘spaceship’ in South Africa, while visiting family as a three-year-old child.

More than 30 years later, Craig went back to save it from impending destruction. After a 12,000-mile journey by land and sea, Craig’s Futuro arrived in Herefordshire. There, the painstaking process of restoration began. 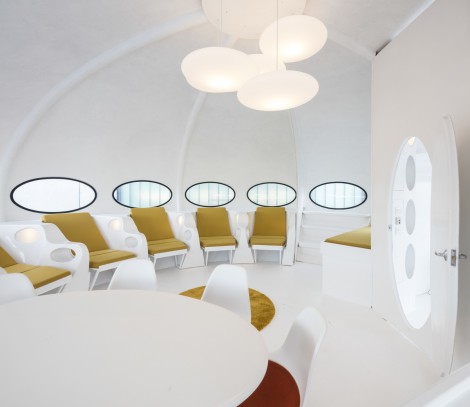 Inside the Futuro House © John Sturrock

A symbol of optimism
On our roof terrace, Futuro House will play host to a variety of performances, screenings, talks and other happenings. Artists, designers and thinkers will question, provoke and seek to change the course of our world.

These speculations will be collected as ‘Slivers of the Future’, a chronicle of how Central Saint Martins engages with the possibilities and inevitabilities ahead.

Professor Jeremy Till, Head of College, says: “It is really wonderful to have Central Saint Martins host the Futuro House as a symbol of optimism and speculation. It brings a smile to everyone who sees it, and acts as a catalyst for future thought and action.”

There will be opportunities for the public to visit the Futuro House – more information will follow.