As students prepare for the Foundation Show 2018, we take a look back at Waterlow Art Park – a large-scale, public project in which 120 Foundation Art and Design Diploma: Fine Art students took over Waterlow Park and its buildings.

Over the weekend of 26-28th January 2018, the students showcased painting, sculpture, moving image and performance across the park’s outside spaces, Lauderdale House and the LUX building. The series of presentations was representative of the three pathways that constitute the Fine Art curriculum area on the Foundation Art and Design Diploma: 2D, 3D and 4D.

Turning Waterlow Park into a sculpture trail, the 3D students produced site-specific artworks. A total of 54 works were scattered across the grounds of the park, using grassy expanses, trees and ponds as exhibiting platforms. Students were given a site-specific brief and tasked with conceptualising their work in relation to the environmental conditions, trialling their ideas, constructing the final pieces and developing maps and promotional material – all within the space of three weeks. 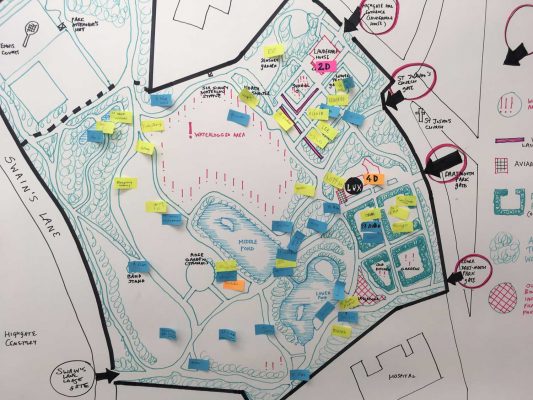 Student Ana Garcia Hoefken approached the brief by evaluating the site and witnessing how people interacted with the space: “I think the main thing I wanted to achieve was to make work that anyone could enjoy and feel part of, especially because I didn’t want to produce something too imposing for an environment which people usually use to clear their minds.” As she explains, it was also crucial for the students to understand “the delicacy of exhibiting for a very broad audience, from children to adults, and not to damage the environment [they] were using.”

Garcia Hoefken created an abstract sculpture made from rotten leaves in a compost box — a large, burgeoning form which appears to erupt from the ground: “I wanted to make something that looked familiar to the environment but also had a surprising factor for those who usually walk around the park.” After completion of the project, Garcia Hoefken commented, “I think what struck me most was the opportunity to hear thoughts from people with different backgrounds and who are not necessarily involved in the art world. I think it was successful for all of us – not only as an incredible challenge but also as an opportunity to get closer as a community. Everyone understood the responsibility that we were given and as a result, we all helped each other to make this exhibition work.”

While the 3D students utilised the outdoor space, Lauderdale House played host to the 2D students. For the exhibition Painting at the Edge of the World they were asked to both adopt and challenge traditional skills and disciplines, examining their educational impact and their contemporary role. Giving the exhibition its title, the project posed the question “at what point does the edge of a painting begin and end?” Does the edge of the canvas or paper determine the end of the artwork, or can it move into other dimensions? In addition, what relationship can painting have to moving image or installation? 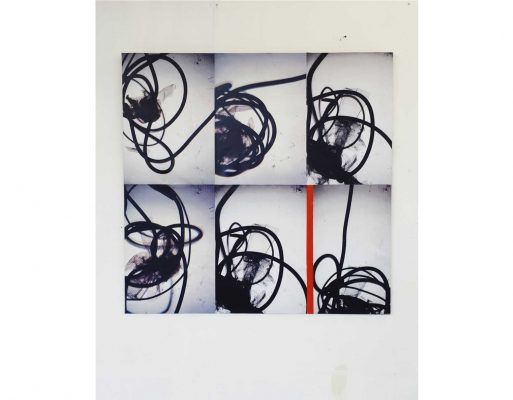 Alisa Aistova’s work Isolation uses photography to explore boundaries and transitional states. Developed from previous works in her series Borders, the images are a form of painting with light. Experimenting with a projector, Aistova created images which appear simultaneously blurred and like X-rays: “Photography, for me, plays the role of sketching and drafting. I like to compare and explore relationships in image…for me it is important to test and explore the creative possibilities and limits of photography. I consider the broadest applications of image and material; experimenting is a very important part of my work. The more unexpected it is, the better.”

As an arts organisation that supports and promotes artists’ moving image, LUX was the perfect place for the 4D students to showcase their time-based, durational works. Incorporating photography, video, performance, spoken word and digital media, the students were set the task of “observing the way the appearance of the world changes and reflects our understanding of time and sequence.”

Students Ika Schwander and Elizabeth Deacon worked in collaboration on a short film entitled FUCKSAPIENS, which was screened in the LUX cinema. During their first site visit to LUX, which sits within Waterlow Park, Schwander and Deacon became interested in the old aviary which is divided into large cages. In their extended research, the duo began by watching Pier Paolo Pasolini’s Saló or The 120 Days of Sodom: “There was a particular scene where people were imitating dogs, attached to leads and begging to be fed by their ‘owners’. This made us think about the complex and hierarchical relationship between humans and animals.” In response, they decided to create a new species caught somewhere between human and animal – which would interact with the real world, carrying out biological and daily activities of feeding, cleaning and reproducing. 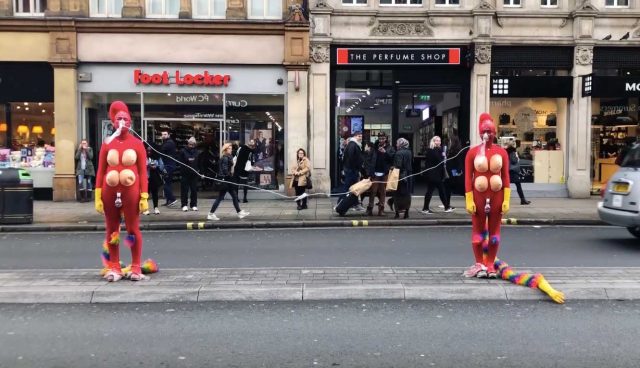 The fabricated species, termed as a Fupneckasis but also known as a Sissy, is bright-red skinned, four breasted and rubber-gloved with tens of eyes and long, furry rainbow-coloured tails. Schwander and Deacon, acting as the two only living specimens, crawl around the streets of London, weaving their way through tube trains, preening themselves in restaurants and public toilets. In the middle of central London, they stage a procreation, chewing through a plastic sack to give birth to their red offspring. As their actions unfold, their performance is documented but is also filmed by the general public, as the mythology of their new species filters into the public realm.