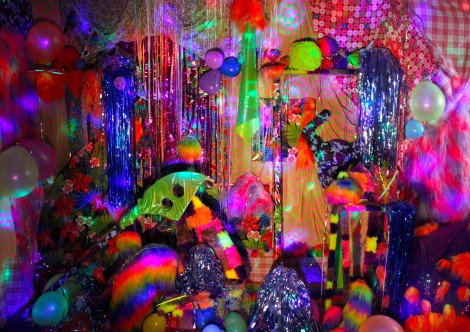 Congratulations to our Foundation students who, this week, unveil their final projects to the public for the first time. As the Foundation Show opens, we caught up with Stephanie Shaw to talk science fiction, synthetic fibres and her plans for the future.

Your final project is a colourful, outlandish installation and one of the most striking pieces of work in the Foundation Show. Talk us though it.

I knew I wanted to do something brash, loud and kitsch. I was looking at Mike Nelson and Cindy Sherman’s work and the relationship between personality and interior. It’s called ‘Identity within Interior’ so viewers can spend time thinking about what creature inhabits this space or what happened the night before. I was looking at 60s and 70s interiors, the influence of the Space Race. There’s lots of synthetic fibres! 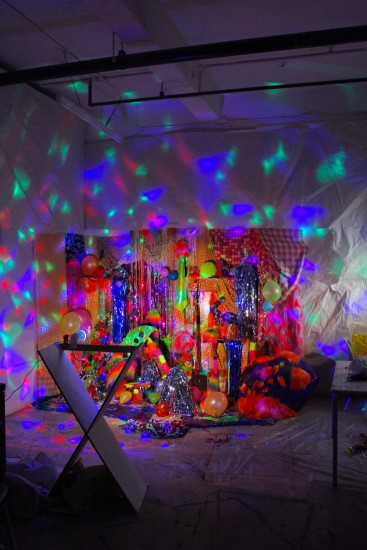 I love the old Star Trek aesthetic, science fiction and B movies like The Thing, The Evil Dead and American Werewolf in London. That sense of something seeming almost real but slightly off-set, I like that. In the back of my mind was the idea that an alien entity had accumulated objects as an idea of humanity and this was it.

Is this similar to what you were making at the start of year?

100% different. I arrived as a painter, I’d never done technical sculpture – I’d never used a drill or an air-compressed stapler.

Do not stay in your comfort zone, push yourself – I came into this course never thinking that I could make anything like this. So say yes to everything.

What’s in your future?

I’m going to study 3D Effects for Performance and Fashion at London College of Fashion. I’ve always be interested in special effects, gore make-up, set building so I’m really excited to get a technical skillset.