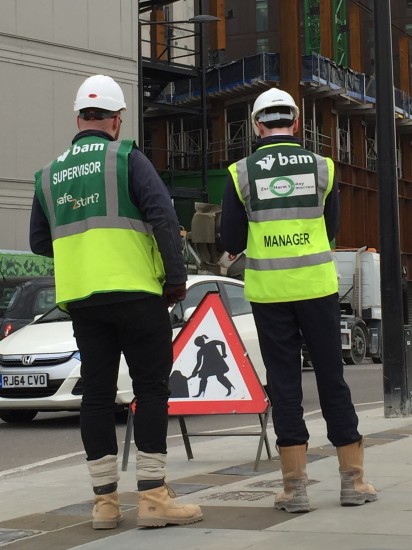 Congratulations to our Foundation students who, this week, unveil their final projects to the public for the first time. With the Foundation Show just days away we caught up with Joe Fraquelli to talk road signs, gender equality and his plans for the future.

Can you talk us through your final project?

It started off looking at road signs and Margaret Calvert’s work standardising them in the ’50s. I wondered if you can change icons to portray a different meaning so went up to the building site in King’s Cross and asked if I could borrow a road sign. I brought back the ‘Working Man’ and with some insulation tape turned it into a ‘Working Woman’ sign. I gave her a ponytail and high heels and put it back outside. Everyone was taking photos, I couldn’t believe how much attention the smallest change had got.

I began doing one-liner pieces about chickens crossing the road but quickly realised my work was better when it had a political or social meaning. So my final project included a rotating pyramid showing the process of a cow becoming a burger using the Cattle Warning sign – I stuck it on a remote controlled car and sent it through a McDonald’s drive through.

I came to the Foundation making sculptures and I love fine art but I want to have more purpose, I want to make work with a message.

Are you still inspired by fine art?

Yes. I went to the Tate Sensorium – an event all about reinterpreting paintings into the senses and it was so interesting. So a Richard Hamilton became a smell and the Francis Bacon became a chocolate with charcoal hidden inside. But this year I fell in love with Stefan Sagmeister– he’s a crazy guy making amazing typography. And he works with his hands which is something that’s important to me.

I would say to take as many risks as you can, make as many mistakes as you can. I’ve made more mistakes in this last project than I’ve had successes but it’s helped progress the work to the best that it could be.

So what happens next?

I’m going to do the Graphic Communication Design BA at CSM next year. I think I want to go into advertising or branding.