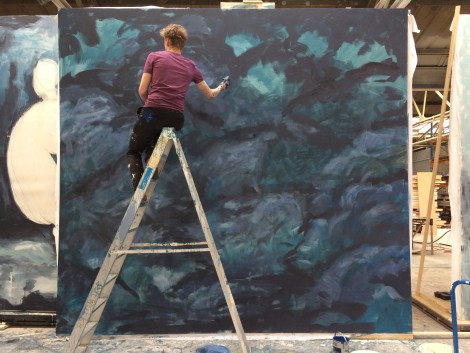 Five students from Foundation Diploma in Art and Design were recently commissioned to help create a series of paintings for the Roksanda AW16 fashion show.

A Central Saint Martins alumnus, Roksanda Ilincic graduated with a masters degree in Womenswear in 1999. Two years later she launched her eponymous label, and has been showing her collections on the London Fashion Week schedule since 2005.

We spoke to Francesca about her experiences putting the show together.

What was your role in the creating the set?

We started by discussing the set, looking at Gary’s mock up set designs and the designs from Roksanda, which was exciting. We then got to work making our own cream coloured primer in huge pots, which we then painted onto the huge canvases.

Each of us had a figure or face to draw out on the canvas, however due to the large scale of the canvas we had to make large drawing sticks which was a challenge to draw with for me, as I had never drawn on such a large scale.

We then painted the canvas, using Roksanda’s main colour palette and mixing our own shades. We worked on getting a marriage of two styles – a darker, mysterious mood, with depth and a brush stroke texture. The painting was the best part, as I feel we could be expressive with the painting marks, working together as a group and on our own canvas.

As well as figurative painting we had to create serval textured landscapes. The process was extremely enjoyable and loads of fun. By the end of each day I was covered head to toe in paint – everything blue! Paint gets everywhere! Up your nose and in your ears! I now have this amazing blue outfit including splattered blue paint shoes which I love.

What did you gain from the experience?

The experience was great fun and was filled with so much laughter, however, I learned how to work collaboratively and not be precious about work. Meeting new people was also great, and I learned about different techniques and developed new styles. It showed me how much is possible in a short shape of time.

How might this experience be valuable to you in the future?

It has changed my perspective on what painting is and how painting can be used – it is not just for the gallery or a wall. It is something that one can feel completely immersed in. I now feel that anything is possible in painting – and I would like to be more ambitious in my future work. 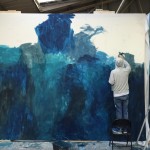 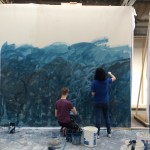 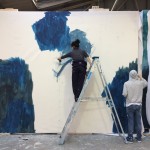 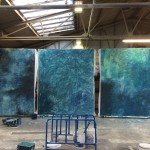 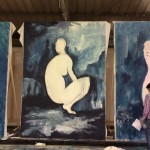 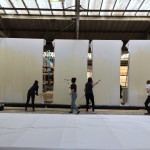