In celebration of the diverse range of skills within our Fashion programme, we have commissioned a series of designer profiles from our second-year BA Fashion Journalism students. Showcasing the art of fashion designing and fashion writing, each profile will provide an in-depth insight into the work and inspirations of a selected designer. Here Isobel Van Dyke profiles BA Fashion: Fashion Print student Gui Rosa.

A Rosa Between Two Thorns

Guilherme d Magalhaes Basto E Xavier Rosa, more commonly known to his peers as Gui Rosa, is the 23-year-old print designer causing commotion in the Central Saint Martins studios. The storm he is concocting involves lace intarsia outerwear, ostrich feather headpieces and an array of knitted fruit. Rosa’s designs speak as loudly as he does – both in his volume of speech and his appearance. Born and raised in Lisbon, Portugal, Rosa has well and truly flourished in London, becoming quite the socialite in the corridors of the College. The pathway between the Central Saint Martins building and the nearby Waitrose has become notorious as a fashion runway for students. Seats outside of the supermarket are filled with the industry’s harshest critics: usually fashion communication students, brandishing their fob chains and half-shaved heads. On the steps sit those from the Foundation Diploma in Art and Design pathways – the show’s buyers, who often reinterpret the looks they see showcased before them. Rosa is the spring bloom between two thorns – one of the many birds of paradise to strut about for critics to squawk at.

Rosa’s own wardrobe references noughties pop princesses with a hint of 90s Chanel. A denim, paperboy hat balances on the crown of his head as he bounces along the makeshift runway, trying not to spill his coffee as he kicks his legs out from beneath his dress. The silk chiffon dress, reminiscent of Jennifer Lopez’s 2000 Versace number, which was recently cited as the motivation for the creation of Google images, is streaked with shades of banana-yellow and turquoise. Leopard print is speckled around a low v-neckline which frames his stubbled chest, drawing attention to the three tangled necklaces that sit against his collar bone. Contrary to what the jungle prints may suggest, for Rosa, this is a tame look. While the majority of this print designer’s references lie in parodying pop culture, Rosa also draws inspiration from his own upbringing. Raised in part by his liberal, Portuguese Grandmother, Rosa has embodied her exuberant persona and the colours of Portuguese culture in his designs. Rosa’s Grandmother has had a huge influence on his life, once acknowledging him wearing a dress by saying, “If you want to be a woman, I’ll pay for the sex-change, just be whoever you feel comfortable being.” For his final collection, with tweeds and skirt suits, Rosa combines his admiration for his grandmother with the look of vintage Chanel, while other aspects are inspired by a more deliberately kitsch culture.

In finding inspiration for his work, Rosa need only look to his everyday life: his lifestyle and interests are enough to fuel a collection in themselves. He believes designs don’t need to be complicated, and while research is important, it is often the simplest ideas that are the most successful. Projecting his own chaotic energy into his clothes, Rosa’s work has a lightness which is missing in today’s industry. 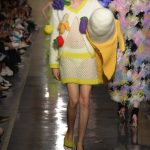 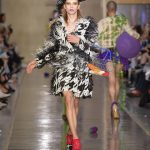 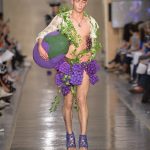 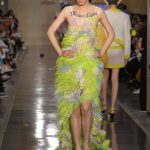