In celebration of the diverse range of skills within our Fashion programme, we have commissioned a series of designer profiles from our second-year BA Fashion Journalism students. Showcasing the art of fashion designing and fashion writing, each profile will provide an in-depth insight into the work and inspirations of a selected designer. Here Freya Martin profiles BA Fashion Design with Marketing student Andrea Sisó.

Andrea Sisó is the twenty-two-year-old with almond eyes and colourful tights, whose soft voice and wide smile can make anybody feel instantly at ease. But speaking to her as she prepared to present her final collection at the 2018 Central Saint Martins Press Show, it became clear there is much more to the graduating student than that – though she’d never admit it herself. 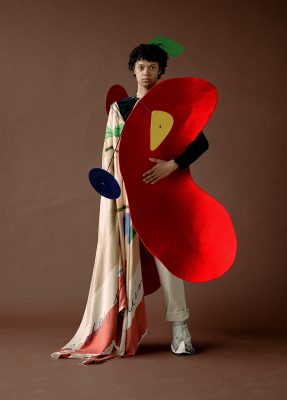 “The collection is about my Spanish roots, immigration and Alexander Calder”, she says. Growing up as the daughter of immigrants in the swirling humidity of Miami, immigration is very much embedded in Sisó’s identity; her final collection becomes her identity card. Lined together, her five looks could be a postcard from her family’s town in Zaragoza, Spain: oranges and reds like the light on a hot Sunday evening hitting the Baroque yellow brick buildings; deep blues and greens like those of the Ebro river and the surrounding trees; greys, blacks and off-whites like the traditional dress of Spanish women wandering the streets. Sisó’s mother used to call her daughter a “bocadillo”, meaning sandwich in Spanish, because of the clashing colours she would pair together as a child. Looking at the pieces she has worked tirelessly over for the last seven months not much seems to have changed.

Sisó’s clothes make you eager for the arrival of summertime: the oversized, hooped gingham skirt bouncing atop of scarlet coloured tights; the straw sun hats and tiny handkerchiefs beneath, dangling as earrings and dusting the shoulders; the peasant blouses; one-sided shawls and the stuffed cotton scarves, which act like pillows across the wearer’s shoulder, daring them to bow their heads in languor when it’s too hot and the days are too long to do much else. 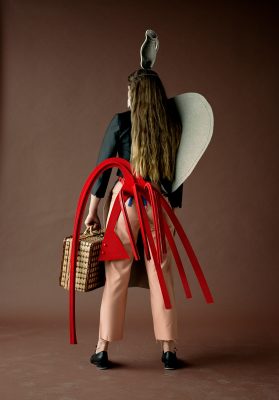 However, amongst the promise of warmer days is the interruption of protruding orbs and mechanical fittings plucked from the large-scale abstract stabiles of American artist Alexander Calder – he himself an immigrant when moving to Paris in the late 1920s. Soft fabrics are juxtaposed with metal contraptions: a ribbon fastening is interrupted by what resembles the steel girders of a railway bridge and a model carries a piece of fibreboard shaped like a deconstructed whale. A pair of trousers is composed of two symmetrical cotton-covered cardboard shapes which flap unhurriedly backwards and forwards like the wings of a tiring bird as the model walks. A cropped blazer is modelled on one which belonged to her great-grandmother some 100 years ago, which buttons beneath a bulging sphere made of rigid milliner’s canvas, sliced into cross sections.

With a thick, inky blue bob cut that ends choppily at her chin and a dulcet Miami accent, slow-pouring like honey, Sisó has a low maintenance intrigue to her. She is from the edge of America where the air is hot and sweet and makes the hair stick to the sides of your face. There she attended a Design and Architecture High School, studying fashion from the age of 14. Somewhere in her formative years, an uncompromising perfectionism blossomed – now only visible to those afforded enough time with her or, to the very perceptive, in the slight downturn of her neatly drawn blue eyeliner. In Sisó’s eyes, there was always a hemline that could’ve been finished better or a pattern that could’ve been printed better. But maybe now, after being selected to present her collection at the coveted Central Saint Martins Press Show, that might begin to change. 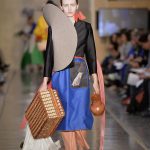 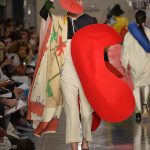 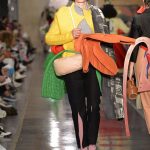 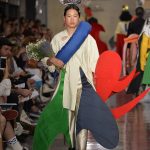 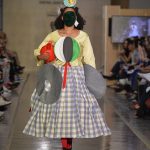