Farewell to the Futuro House

After two years, Central Saint Martins says farewell to the spaceship resident on the roof.

The Futuro House, designed by Matti Suuronen in the 60s, was brought to Central Saint Martins by artist Craig Barnes “as a catalyst for future thought and action”. In its time at the College, the alternative space has been home to gigs, exhibitions, film shoots, research salons, lectures, student experiments and creative residencies.

Having handed over the Futuro keys to Central Saint Martins students and staff to populate with futural imaginings, it has been a delight to see what grew within this oversized petri dish of creative oozings, but also simply to witness those transported afar by the space. It is time for it to slip away over the summer, co-ordinates firmly set for ‘destination unknown’.”
Craig Barnes 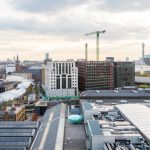 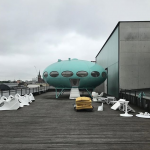 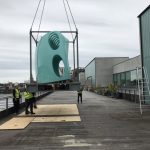 While it’s impossible to encapsulate the impact the landing of this craft has had on the College, here are a few highlights. At the start of 2017, Metaphonica (the College’s annual collision of music and art) set up in the space for a 24 hour set. But the most impressive feat of creative endurance was in April of this year, when the Futuro took onboard four Foundation students as residents to live and work within the structure. Over the course of four days, the students experimented and collaborated, all captured in a daily video diary:

And finally, just weeks before the dismantling began, Jeremy Till, Head of Central Saint Martins, welcomed the Ooni of Ife to the College. But one can only ground a spaceship for so long, and now we wish the Futuro House all the best on its adventures into space and time.