Eduardo Paolozzi: Past and Present

In the early 1950s, Eduardo Paolozzi could be found working into the small hours in the textile and print workshops at the Central School. Alongside the current Whitechapel Gallery retrospective, a trilogy of projects at Central Saint Martins highlight Paolozzi’s contemporary relevance and on-going legacy.

He may be better known for his time in the ceramics department at the Royal College of Art, but the one of Paolozzi’s first teaching positions was in the textile department at the Central School. Across February and March, Central Saint Martins will host not only a historical display and symposium examining Paolozzi’s time at the school, but also a collaboration between BA Textile Design and MA Culture, Criticism and Curation on the annual Big White Wall installation, will take inspiration from Paolozzi’s practice.

“The history of Paolozzi at the RCA has dominated the narrative but his work at the Central School was influential and significant to his practice,” says Rosie Ram, a graduate of MA CCC, current student at the Royal College of Art and curator of the CSM Museum Window Gallery display on the artist’s experimentation in the Central School workshops. 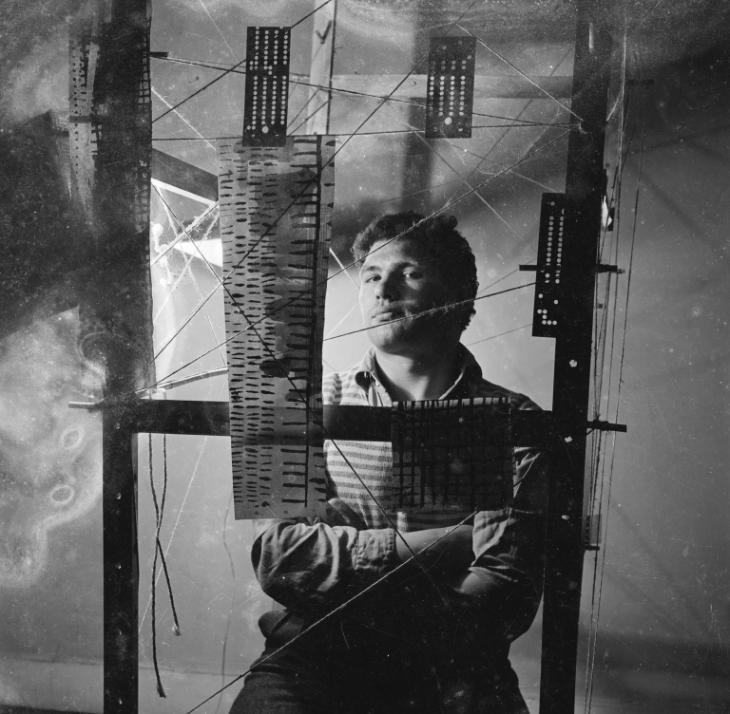 The display comprises a selection of print designs Paolozzi developed from test sheets that have not been exhibited before. The focus is a screen-printed ceiling he was commissioned to produce in 1952 for the London office of Ronald Jenkins, an engineer at Ove Arup. . A monochrome cacophony of mark-making, the screen-prints were the results of Paolozzi’s creative partnership with Anton Ehrenzweig, a technician at the Central School. The two could be found trialling processes in the workshops into the early hours:

He had such a hunger for different disciplines and technologies and his time at Central fed that.

When it was time to install the paper, Paolozzi invited the workmen to put up the rolls in any order they wished, creating accidental combinations. Ehrenzweig later wrote of the artist: “He certainly thrived on living tools possessing their own aesthetic judgement; and equally well on accident inviting media that cannot be fully controlled.”

As an author, Ehrenzweig explored the unconscious mind within creativity, demonstrating how art may, on the surface, be chaotic but underneath had an essential structure. As Ram explains: “There’s a dialectic between order and chaos. That chaos is underwritten by a hidden order.” This symbiosis is expressed not only by these screen-prints on show, but also metaphorically through many textile production processes.

The prints on display come from the archive of artist-photographer Nigel Henderson, a colleague and close friend of Paolozzi’s from the Central School. In Henderson’s house in Bethnal Green, Paolozzi’s screen-prints plastered the walls, creating an ‘all over’ collage of abstract and semi-abstract designs. Sharing an interest in patterns in the urban environment, Paolozzi and Henderson would go on walks together around East London, collecting bomb debris and finding images that informed their work.

While Ram’s display in the Museum Window Gallery offers a moment in the late 40s and early 50s, the influence of Paolozzi extends beyond. The annual Big White Wall project – supported by Cass Art and Liquitex –offers up a 30m long blank ‘canvas’ within the main open space of Central Saint Martins as site for a temporary artwork. This year, BA Textile Design students and MA CCC students will collaborate on “Cross Hatching”, which dissects everyday objects through “random acts of printmaking”. The work reflects the “wall collage” surfaces created by Paolozzi and Henderson at the Central in the 50s, but moves that forward to combine mono-print with the potential to digitally scan and edit imagery.

Beyond the specifics of his practice, Paolozzi inspires through his reliance on cross-disciplinary collaboration. “He wasn’t working in isolation in an artist’s studio,” says Ram. “He was working within an interdisciplinary network where methodologies and ideologies were exchanged… There’s a lot of rhetoric in art schools today about collaboration and inter-disciplinarity and I think it’s important to look to the history to explore what that means. For Paolozzi, collaboration extended the possibilities of his practice, pushing it into new, experimental territory. How might this happen in the art school today through collective practices, sharing and collaborative making?”