Duncan Hooson On The Great British Pottery Throw Down 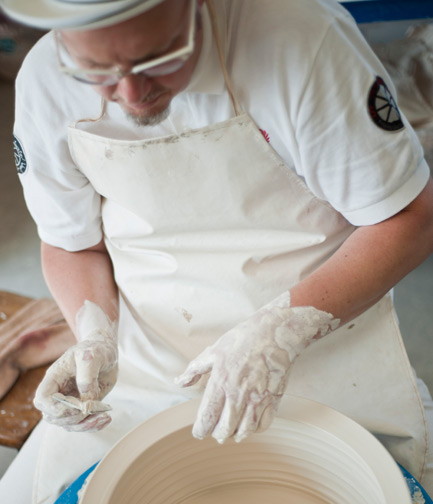 Duncan Hooson, Stage One Course Leader on BA Ceramic Design, spoke to us about his recent appearance on the BBC’s Great British Pottery Throw Down, how the show is altering the wider perceptions of ceramics, and his Clay Cargo project.  If you want to find out more about the Ceramic Design course please visit the course page and book your place on one of the open days.

How did you get involved with the Great British Pottery Throw Down?

Love Productions, who produce the Great British Bake Off, were looking at developing a new series keeping within their similar format. They decided to research ceramics and its potential as an accessible, informative yet fun series and so spoke to a number of specialists across the UK and they came to see me.

The BBC then gave the series the green light, and I was involved in those negotiations; setting up what the briefs could be and the challenges that could be set within the constraints of the ceramics process. I was asked if I would speak to camera on a range of techniques and processes that could be used as segments to be interspersed in each programme.

Love Productions came to film me at CSM in the Ceramic Design Studio for some talking head shots and asked lots of questions. Each question required a full explanation; I was then asked the same question again but asked to edit it and then finally announced that each response needed to be less than a minute – and then cut to thirty seconds. That was an interesting process, editing your own information whilst being filmed.

How successful has the show been?

They were hoping for 1.5 million viewers, and it’s currently over 2 million, so there’ll probably be a second series. It seems to be a hit on Gogglebox if that’s any gauge.

What do you hope people will take away from Throw Down with regards to the public perception of ceramics?

I hope that there will be this huge surge in interest in ceramics as a viable career path. What would help the students here who graduate from Ceramic Design is knowing that there is now the potential for an audience to be knowledgeable enough within the subject to appreciate why things made in clay by independent makers cost the amount they do.

Can you tell us a bit more about your Clay Cargo project?

I’m co-director of ClaygroundCollective, which was set up about ten years ago to address the decline in the level of engagement within schools with ceramics. It’s about getting people interested in clay as a material itself rather than focusing on the end product. Clay Cargo was designed as a three-year project that focused on the canal system, initiated by Josiah Wedgwood, and we developed a range of participatory workshops and installation activities along the London, Birmingham and Stoke (where I’m from) canal route.

What happened during the events held here on Regents Canal outside CSM?

The idea was to celebrate the ‘invisible’ people who previously built this area during the Industrial Revolution, and the people who are building it now. Many of the buildings still here today are made of clay. Together with CSM students, who worked as facilitators, we used a canal barge, which became a laboratory for community groups to come on board and make things.

We also hosted CPD discussion groups with a range of creative practitioners and those involved in the cultural sector.  Professionals who have participated include Javier Cuadros from the Natural History Museum, who’s currently looking at coordinates of clay samples gathered by Curiosity on Mars, and Lex Harrison from ARUP, one of the big civil engineering companies, on the resurgence of clay as a building material.

As a culmination to the week-long programme, we worked with 5 tonnes of clay and 3000 people to produce a ceramic installation on the Ghat Steps accompanied by specially produced music that Clayground commissioned from the Dead Rat Orchestra and performed by Steel Melodians.

Clay Cargo has been a successful three year project that’s allowed thousands of people to engage with clay. I am very grateful for the generous funding we have received including ACE, Canal and River Trust, British Ceramics Biennial, Paul Hamlyn Foundation. The final celebration was an exhibition held at the recent BCB 2015 held at the Spode Factory in Stoke with approximately 12,000 visitors.

How have CSM students been getting involved?

Over 3 years Clayground Collective has engaged about 20 students from Ceramic Design, and one from Product Design. We’ve paid them as facilitators each summer to work with us. In return we have shared experience, our contacts and enabled them to fully immerse themselves with participatory practice working directly with the public. They have also been advised, and seen at first hand, how an independent small-scale organisation goes about producing outdoor, public participatory events. It’s not just about having an idea, but how you grow that in to a reality.